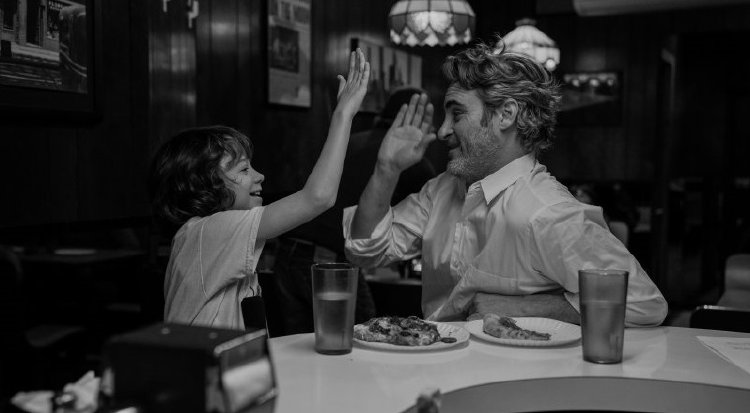 Johnny (Joaquin Phoenix) is a NYC-based radio journalist travelling around the country with his colleague Roxanne (Molly Webster) interviewing kids on their thoughts about the future.  While in L.A., he stops in to see his sister, Viv (Gaby Hoffmann), who he hasn’t seen since their mother’s death a year earlier, and the 9 year-old nephew, Jesse (Woody Norman), who barely remembers him.  Then Viv gets a phone call and must rush to San Francisco where her bipolar husband Paul (Scoot McNairy) is suffering a breakdown and Johnny is faced with relating to a child in a whole new way in “C’mon C’mon.”

Writer/director Mike Mills has made a movie based on his dad ("Beginners") and his mom ("20th Century Women").  Now he’s loosely based one on himself, as both a documenter of kids’ thoughts and a new dad and this is simply the best movie about a brother and sister and her kid since "You Can Count On Me."  Following “Passing” and “Belfast,” it is also one of a round of films shot in glorious black & white (cinematographer Robbie Ryan, "Marriage Story"), a choice that sets off both urban environments and Phoenix and Hoffman’s salt and pepper locks.  And after playing everything from Jesus to The Joker in recent years, it is a refreshing change to see Phoenix in a more Everyman role, one in which he charms.

We learn that Johnny and Viv were somewhat estranged via flashbacks to the siblings attending to their mother (Deborah Strang) on her deathbed, Johnny indulging her dementia, Viv dutiful but also angry (we’ll later learn Viv believes Johnny was favored while she was always misunderstood).  And so, although the film quickly separates the two, it is also about their reconnection which Mills cleverly achieves through Johnny’s newfound appreciation of his sister through her parenting and coping skills.  Even better, Phoenix and Hoffman are a joy to watch act together, the two physically believable siblings in both appearance and movement.  I actually found this relationship far more intriguing than that of Johnny and his nephew.

Jesse is a weird, imaginative kid who likes to pretend he’s an orphan and has a habit of asking adults about their ‘dead children.’  In a reversal of how they treated mom, Viv indulges this behavior while Johnny is made uncomfortable by it.  Jesse’s absent father is made present the morning after Johnny’s arrival when the uncle awakens to find his sister already gone, Jesse blaring classical music (dad plays in a symphony).  ‘I get to be loud on Saturday,’ Jesse informs Johnny.

And it is sound that will be the uncle and nephew’s initial connection, Jesse fascinated by Johnny’s recording equipment.  Soon he’s walking around town recording everything, even helping his uncle at his work.  When work calls, Johnny convinces Viv to let him bring the boy back to New York, although his inept handling of the situation proves a learning experience (‘You invited a nine year-old boy to New York before asking his mother?!’).  Jesse’s fascinated by the city’s skateboard parks and loves being part of his uncle’s crew (Jaboukie Young-White’s Fern becomes a transparent caretaker), so when Johnny tries to send him back home, the kid pulls a stunt.  Indulged, Jesse travels once again, this time to New Orleans where Viv will meet up with her traveling men.

Mills employs books and essays along the way to make salient points, a reading of “The Wizard of Oz” connecting the trio by phone at bedtime, Johnny responding profoundly to an essay on motherhood found on Viv’s desk.   The continuous interviews provide a more flyover approach to the dreams and concerns of youth (the title comes from Jesse’s response to his own interview questions, a recording his nephew made that Johnny discovers after he’s gone).  Norman, a young English actor you’d never know wasn’t a native American, behaves like an intelligent kid from an artistic household, prone to the occasional emotional outburst his unusual situation warrants.  His shaggy brunette mop pairs well with Phoenix’s grayed counterpart, the two peas in a pod.

The film does, perhaps, go on a bit too long, Mills even carrying those interviews over his closing credits with no additional insight.  But “C’mon C’mon” is a reminder of just how good the underutilized Gaby Hoffman is, the actress’s portrayal of modern day motherhood one of the film’s best achievements.