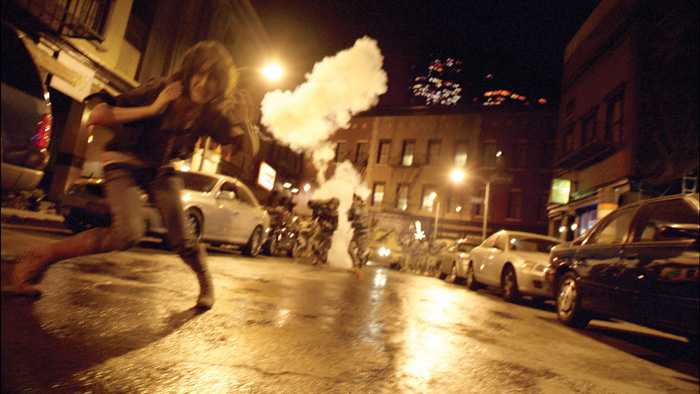 A graphic announces we are watching the contents of a digital SD card found in US-447, the area formerly known as Central Park. Rob Hawkins (Michael Stahl-David, SHO's "The Black Donnellys") tapes lover Beth McIntyre (Odette Yustman, "Walk Hard: The Dewey Cox Story," TV's "October Road"), but one edit later people are giving testimonials at his going away party and Beth has arrived with another man. But life as they know it ceases to exist that night when Manhattan is ripped apart by an unexplained horror only identified as "Cloverfield."

Produced by "Lost's" J.J. Abrams, but directed by his "Felicity" colleague Matt Reeves ("The Pallbearer"), "Cloverfield" is clearly a reflection of post 9/11 fears that boasts terrific effects but roots in several recent films, making it something of a letdown after all its pre-release hype. Still, it's quite a convincing ride if not a terrifically ground-breaking one. Writer Drew Goddard (TV's "Buffy the Vampire Slayer," "Lost") effectively sets up his characters, making his audience fill in the gaps that one would naturally experience watching recorded episodes (it takes a while to figure out Rob and Beth's back story, for example). Rob is an up and comer who is leaving New York for a vice presidential job in Japan (a nice tip of the hat to "Godzilla," one of the many inspirations for "Cloverfield"). His party is being thrown by good friend Lily (Jessica Lucas, "She's the Man") and dimwit Hud (T.J. Miller, TV's "Carpoolers") is given Rob's video camera to record people's goodbye messages (another eerie reminder of all those phone messages left behind on 9/11). Hud only has eyes for Marlena (Lizzy Caplan, "Mean Girls," TV's "The Class"), who only has a peripheral attachment to the group and has shown up just to make a quick connect. Rob argues with Beth, who leaves with her date just as rumors start to swirl that the two long term friends have slept together. At the twenty minute mark with background in place, the party is disrupted by what they believe to be an earthquake. Someone has the bright idea to hit the roof for a better view and they discover they are up against no earthquake when they witness a fiery explosion against Manhattan's skyline. As the flee to the street a huge object crashes against a skyscraper and lands yards away - the disembodied head of the Statue of Liberty. All the emotions and experiences of 9/11 are present in "Cloverfield," from the destruction of a beloved symbol of New York City to the utter terror and confusion, cell phone disruption, clouds of dust billowing down city corridors and the horrible unknown of loved ones's fates. Lily, Rob, Rob's brother Jason (Mike Vogel, "The Sisterhood of the Traveling Pants," "Poseidon") and Marlena find themselves grouped together with Hud, who continues to document their experience. There are whispers of something living having been seen, and Marlena seems in a state of shock, while Rob becomes obsessed with finding Beth, especially after a new cell phone battery reveals a message from his hurt and terrified friend from back at her Midtown apartment - directly in the path of whatever is out there. Before we even see the monster (and see it we do with increasing clarity if not exactly comprehension), the effects are impressive beginning with a truly frightful sequence set on the Brooklyn Bridge, which is destroyed as New Yorkers try to use it to flee the city. The creature itself, monstrously huge (although there are some perspective inconsistencies, particularly during its late going 'closeup'), resembles some kind of prehistoric deformity, with too many limbs and deadly parasites it spreads far and wide. The group suspects the U.S. Government may have something to do with it, and they are there in great numbers, evacuating the city for the brute force needed to destroy the beast ("28 Weeks Later" comes to mind here, while makeshift hospitals recall Korea's "The Host," just as the central recording conceit comes from the seminal "The Blair Witch"). When what is left of the group eventually make it to Beth's apartment building, it is only to find it listing across the street, leaning into another building. Their adventure in getting to her is exciting, although her rescue is far from believable, given her physical state when they find her, one of the film's major failings. (It is interesting to note that Rob and Beth dash for safety into the same type of Central Park underpass that was the undoing of Jodie Foster's character in "The Brave One.") Cinematography by Michael Bonvillain ("Lost" again) is mostly believable under the circumstances and sensible enough to be disorienting, no matter how frustrating to an audience trying to 'see,' when circumstances dictate. A nice touch is added by the fact that Rob's party and subsequent action has been taped over his and Beth's day together, so that whenever the camera stops, we get snippets of a happier time. With "Cloverfield," the filmmakers give their audience a sense of the horror, uncertainty and utter shift of reality that New Yorkers must have felt five years ago, but it would have benefited from some new genre twists.

Jason (Mike Vogel), Lily (Jessica Lucas) and their friends are throwing a bon voyage party for Jason’s brother, Rob (Michael Stahl-David), who is heading for a work stint in Japan. The celebration turns to terror, though, when a skyscraper-sized monster descends on New York City and the revelers must scramble to survive the titanic threat stomping Manhattan in “Cloverfield.” It’s “Blair Witch Project” meets “Godzilla” with Aliens” and “28 Weeks Later” thrown in for good measure from producer J.J. Abrams and TV director Matt Reeves. Jason promises Lily that he will record on video all the testimonials from Rob’s friends – sort of a going away gift to remind him of home. Very soon, after they arrive, Jason shrugs off the promised responsibility to his slightly inebriated buddy, Hud (T.J. Miller), who keeps the camera rolling. Then, a distant explosion interrupts the party. The partiers turn on the news and learn that a giant tanker was destroyed in the city’s harbor. Many of them climb to the roof and witness another, enormous fireball, this one spewing burning debris, like firebombs, across the city. It is time to get out of Dodge as Jason, Lily, Rob, Hud and Marlena (Lizzy Caplan) desperately try to find a way off of the island. All the while, Hud is still rolling tape. The herky-jerky roving camera proves tiresome early on – the same way it did, for me, with “Blair Witch.” Cloverfield” is an uneven sci-fi monster movie that, unlike the classic Japanese monster flicks that at least gave a clue of the beast’s origins, simply introduces the gigantic threat and takes it from there. This isn’t a bad thing but, unfortunately, the script by frosh feature writer Drew Goddard goes in implausible, even silly, directions. One extended sequence has the crew of survivors take on a rescue mission that made me say, “Huh?” There are other such incredulities throughout “Cloverfield.” But, audiences want to see a good giant monster movie and, while I have lots of problems with the story, Cloverfield” delivers on the spectacular special effects by Andy Clement et al. You see New York City ravaged in whole new ways, from the decapitation of the Statue of Liberty to the destruction of the Brooklyn Bridge. The monster, however, is best kept cloaked in ambiguity. When I finally saw the big bad boy I was disappointed. The “Aliens” derivation has a slapdash feel and is not necessary to the story. Well, it is. If they didn’t include it, the film – which is a very short 85 minutes with credits – would have been much shorter. It is telling that I kept checking the time after just 30 minutes. The young, attractive cast do well enough but are just fodder for the F/X monsters to terrorize. The techs and the promise of scares is the draw for Cloverfield.” Personally, I would wait for the DVD and rent it (but only on a big screen TV).