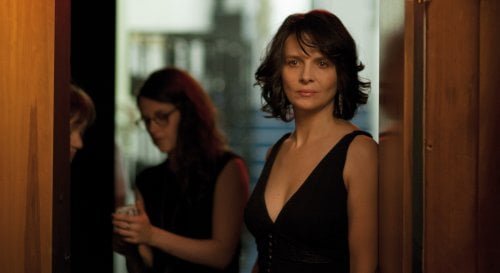 In a train making its way through the Swiss Alps, film star Maria Enders (Juliette Binoche) gets word from her personal assistant Valentine (Kristen Stewart) that the man she was on her way to honor and accept an award for, her mentor Wilhem Melchior, has died. As she wrestles with her own emotions, she's approached by prestigious director Klaus Diesterweg (Lars Eidinger, "Everyone Else"), who's pushing her to take on the role of Helena, the 40 year-old character pushed to suicide by the manipulations of the 20 year-old Sigrid, the role which made Maria famous twenty years prior. She was chosen by Melchior who directed her in his 'The Maloja Snake,' which took its name from the unique formation of the "Clouds of Sils Maria."

Writer/director Olivier Assayas ("Summer Hours," "Something in the Air") has made his masterpiece with this Chinese puzzle box of a movie whose characters reflect themselves, their roles and each other, personalities meshing and splitting, suicides trailing in their wakes. With his haunting alpine location suggesting both rebirth and the mists of time, Assayas's film, like Melchior's 'Snake,' is an Ouroboros, a snake eating its own tail. It is also one of the truly great films about acting, "All About Eve" refracted through the lens of Bergman's "Persona," squared. The first thing we notice is the close and comfortable relationship Maria shares with Valentine. They drink, smoke and gossip together, Valentine filling in her boss with the 'Internet news' Maria pretends to hate. The two are being put up at Melchior's home in Sils Maria, his widow Rosa (Angela Winkler, "The Tin Drum," "Benny's Video") needing to get away from memories. As Maria dithers over taking on Helena, Valentine encourages her, reading lines, even while hiking in the mountains. It is here that Maria tells Valentine she feels superstitious about Helena, the older actress who played the part with her having committed suicide in these very mountains. But the more Maria reads Helena, the less confident Valentine becomes, the play beginning to slither into their relationship. Maria becomes jealous of Valentine's budding romance with a photographer and spies upon the young girl as she sleeps. Then there's Jo-Ann Ellis (Chloë Grace Moretz), the notorious young actress slated for Maria's former role. Valentine introduces Maria to the young actress with her exploits and a trip to see one of her films. Maria's not convinced until she meets her in the flesh and gets a freshly scrubbed version full of flattery, but a second meeting results in a PR nightmare when news comes that Jo-Ann's lover's wife, a highly respected artist, has attempted suicide. Moretz is amusing as the two-faced Ellis, particularly in the YouTube videos Maria watches to assess her character, but the movie belongs to Binoche and Stewart, who became the first American actress to win a Cesar Award for this role. Binoche is caught between Sigrid and Helena, trying on roles to define herself, until Klaus delivers mysterious 'new pages' on Helena's character by Melchior which appear to set her stage (Helena as a grown up Sigrid?). Stewart's had a great year, terrific in "Camp X-Ray," "Still Alice" and now this, her Valentine a tragic character caught up in the battle between two actresses, one of whom is battling herself. The veteran French Oscar winner and young American actress are completely enthralling together. Assayas's journey from train to hotel to awards show to private home grounds the film in the life of a working film actress but he occasionally interrupts her and Valentine's narrative with scenes featuring Rosa at Sils Maria, or segueing to Arnold Fanck's 1924 film 'Cloud Phenomena of Maloja,' as if to suggest mysterious forces at work. At film's midpoint, he features Valentine driving away from Sils Maria to meet Piers Roaldson (Brady Corbet, "While We're Young") only to be caught up in mountain mists (and a bit of 70's psychedelia). At film's close we're treated to a modernist stage design for the new 'Snake,' a set featuring glass cubes for the actresses to enter, exit and inhabit. And what a powerful ending it is, lines drawn for battle, the fate of one character left ambiguous as another takes her place. "Clouds of Sils Maria" is a knockout, an exhilarating piece of cinema about identity, role playing and the mystical influence of nature. Grade: