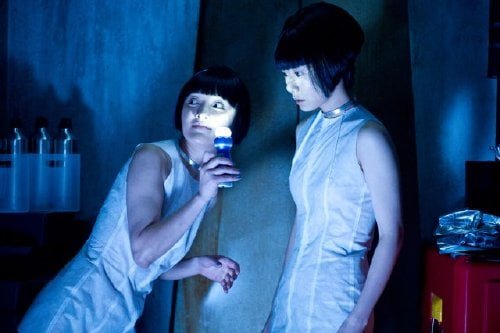 A nineteenth century American on a ship from New Zealand. A young English composer acts as apprentice to a Belgian master between world wars. A female journalist investigating a suspect nuclear power plant in 1975. A debauched publisher gets imprisoned in a nursing home in the early twenty-first century. A fast food worker clone aspires to something more in a dystopian future and a tribesman after the fall of civilization meets a technologically advanced being from another world. They are all part of the same, never-ending story in the "Cloud Atlas."

It's easy to see what drew "The Matrix's" Andy & Lana (formerly Larry) Wachowski and "Run Lola Run's" Tom Tykwer to adapt David Mitchell's astonishing novel, with its elements of fate and connections through time and space, for the screen. But Mitchell's novel was told in a mostly linear fashion, going from one story to the next before rewinding back in time. The filmmakers have essentially deconstructed the book to find its connective tissue, then reassembled it using flashforwards and flashbacks (which publisher Timothy Cavendish (Jim Broadbent) disdains in the film's self-referential prologue) to bang us over the head with the novelist's parallels and points, robbing the audience of the rich experience of finding them for himself. The Wachowskis and Tykwer also find connections where there were none to begin with by casting the same actors in several roles, crossing racial, ethnic and gender boundaries. Mitchell used a birthmark as a device to carry one soul through his story, but there was no reason to believe every character had a place in each other's pasts and futures. Makeup and contacts do not make Halle Berry or Doona Bae convincing European white women and Hugo Weaving's transformation into the Nurse Ratchett-like Nurse Noakes brings the film into Monty Python territory. And yet, the film has its moments, its interesting performances, which make the film a thoroughly flawed curiosity. The earliest story, that of American Adam Ewing's (Jim Sturgess, "One Day") horror at the use of slavery in the South Pacific, begins the books themes of fighting against oppression and injustice. Greed, being another eternal evil, is personified by Dr. Henry Goose (Tom Hanks, having a character actor's ball), who treats Ewing for an ailment as they head for San Francisco. Also aboard is Autua (David Gyasi, "Red Tails"), a stowaway slave trusting in Ewing's nature for salvation. There is a form of enslavement in every story, sometimes in the background, like the Mexican sweat shop laborers in the nuclear plant episode, more prominent in the most successfully told of the six tales, that of Sonmi-451 (Doona Bae, "Linda Linda Linda," "The Host"), a 'fabricant' whose life exists merely to serve the 'consumers' of Neo Seoul in 2144. This tale employs the most obvious science fiction elements, and the filmmakers clearly revel in the production design of this segment where, for example, 1975 looks cheesy and false. Doona Bae is luminous as the human clone whose eyes are opened by an unlucky sister who dares to speak up for herself (inspired, in part, by watching a 'vid' of a movie based on the previous story, the most humorous outing belonging to Broadbent's Cavendish) and the rebel leader who sees her inspirational potential. Broadbent succeeds in making the novel's less likable protagonists, like that publisher, more so with humor. His world famous composer Vyvyan Ayrs comes across as more loonily deluded than egotistically manipulative in keeping his assistant Robert Frobisher (Ben Whishaw, "Bright Star," who'll be Broadbent's mistress a tale or two later), who writes the great Cloud Atlas Sextet under his roof, down. Tom Hank's procession of characters throughout have a kind of arc, from murderously mercenary (Goose) to conflicted (the 70's Isaac Sachs) to decisive (the post-apocalypse's Zachry), with smaller stepping stones in between. Hanks is revelatory as Cavendish's client Dermot Hoggins, the Cockney thug author of 'Knuckle Sandwich' whose action against a critic begins his publisher's rise and downfall. (There are a lot of falls in "Cloud Atlas," by the way, both figurative and literal, an allusion to Milton's 'Paradise Lost.' Unfortunately the filmmakers have excised one of them, Ewing's tumble which connects him to Zachry centuries later.) James D'Arcy gives some of the film's most moving performances in the character of the witness, first as Ewing's lover Rufus Sexmith, who reappears years later as the man trying to help Luisa Rey (Berry), the investigative journalist on the trail of potential nuclear disaster, later as the Archivist who debriefs Sonmi. But there are casting issues other than the ones previously noted - just why is Susan Sarandon in this film? She first appears wearing a beak of a nose as the wife of Rev. Giles Horrox (Hugh Grant, later a fierce tribal warrior!) and reappears in a few small roles, to little effect. One can feel her as the nuclear activist cut from Rey's story. "Cloud Atlas" is a big, rambling mess of a movie which is sometimes affecting, sometimes silly, sometimes beautiful, often garish. The filmmakers have succeeded in keeping their interweaving tales easy enough to follow by cutting directly on moments which link their stories. For clarity's sake, this is commendable, but in other ways, the Wachowskis and Tykwer have made 'Cloud Atlas for Dummies.' It's a pity that those who see the movie first and then seek out the book will never have the experience of reading it untainted by the filmmakers' insistence on having already connected the dots.