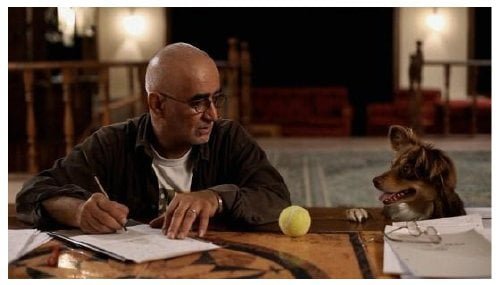 In a villa by the sea, a screenwriter (codirector Kambozia Partovi) stays apart from the world, his only companion his dog. His seclusion is broken when a young woman (Maryam Moghadam) trying to escape Iranian authorities arrives at his door and refuses to leave the refuge behind his "Closed Curtain."

The second film made by Iranian director Jafar Panahi (co-directed by his "The Circle" screenwriter Kambozia Partovi) since he was banned from filmmaking for twenty years is another contemplation on filmmaking, but also on death and what makes life worth living. While "This Is Not a Film" was more of a documentary, "Closed Curtain" is an art house film where characters disappear and reappear, the screenwriter's interrupted story calling for the hand of the director (Panahi) himself. The film opens as it ends, with a static shot from inside the villa, looking through its gated window out onto the sea. We see the screenwriter arrive, and the first thing he does is pull the curtains, adding additional blackout drapes, cocooning himself and Boy, his loyal little dog, inside. But the outside world continues to seep in, and we learn from the television that as dogs are impure in Islamic society, they have been banned in public, police taking drastic action (sweet Boy lies on the couch in front of images that will make any animal lover shudder). As the writer has a litter box for Boy, we can conclude that he is shielding his dog in the villa, but it is when he changes the litter box that he is startled by a couple standing in his doorway. We've heard shouts and commotion outside and the man, Reza (Hadi Saeedi, "Offside"), tells the writer that his sister ran into the sea to escape and they must take shelter. The writer begs them to leave, wanting no trouble. Eventually Reza says he will get a vehicle and return quickly for the woman, who must be watched because she's suicide prone. The writer tries to keep her on the ground floor of the three story home, but she keeps invading his space (a metaphor for the authorities supposedly on her tail). She knows Boy is being hidden and knows about his case (and fills us in to even more disturbing background). She promises to leave as soon as her clothes are dry. Later, the writer discovers her clothes are gone - and so, apparently, is she. Not so fast - she'll reappear, trying to open the house to the outside. Drapes even cover the walls here, hiding framed Panahi film posters. The writer feels compelled to craft a makeshift cupboard in which to hide himself and his dog, and he does hide there when the home is broken into. Soon after, he'll disappear himself, replaced by Panahi, who's been waiting in the wings. Panahi attends to the broken window, watches the video made by the writer, recreating the strangers' arrival (in which we now can see a filmmaking crew) and talks with a neighbor, who assures him he will work again and that there is more to life. We see Panahi walk into the sea then rewind himself out. Many things are mirrored - Meleka claims to be a fugitive, yet says she's written reports on men like the writer; one of Panahi's workers wants a photo with the famous director, the other is afraid of the association; the adorable dog here was a yappy neighbor's dog which threatened Panahi's iguana in "This Is Not a Film." A cutaway shot notes one glass full and one empty. While we're well aware of the outside world and even get occasional glimpses of it, the camera itself never leaves the villa. Like "This Is Not a Film," Panahi's vision is, however, metaphorically blinded. But that static camera which recorded the writer's arrival notes the director's departure and he'll back up once again, letting a man and his dog into his car. Grade: