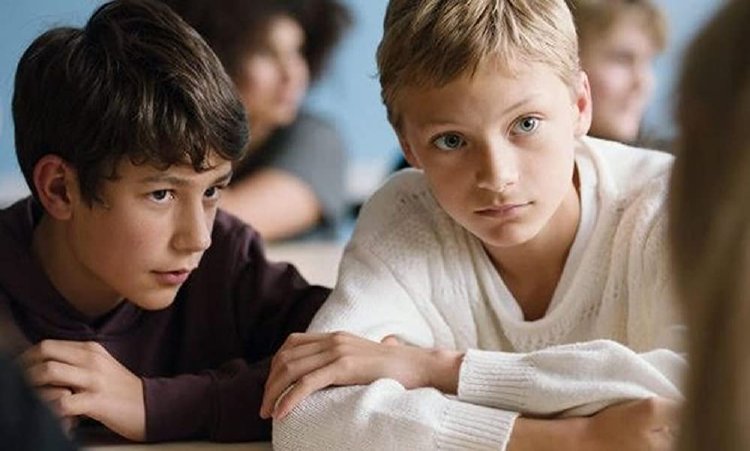 In a small Belgian town, 13 year-old Rémi (Gustav De Waele) and Léo (Eden Dambrine) are inseparable best friends running through fields and riding bikes together, even sleeping side by side at night in the same bed.  But when they both enter middle school, their intense bond is misinterpreted, one young girl asking if they ‘are together,’ boys hurling homophobic slurs.  Rémi pays no mind, but Léo begins to pull back, at least in public, afraid to appear too “Close.”

Cowriter (with "Girl's" Angelo Tijssens)/director Lukas Dhont won the 2022 Cannes Film Festival’s Grand Jury Prize with his sophomore outing, a sensitive examination of the restrictions society places on masculinity, robbing men of intimacy it deems inappropriate.  “Close’s” two young stars give breakout performances, cinematographer Frank van den Eeden’s ("Girl") camera loving both, but of the two, Eden Dambrine, who has the more complex role, simply gives one of the great child performances committed to film.  “Close” is one of the best films 2022 had to offer.

When we first meet them, Léo and Rémi are an exemplar of purity, from their clear love for each other to their youthful beauty.  Léo watches Rémi play his clarinet, practicing for a recital, and imagines becoming his manager, arranging world tours.  Later, he’ll be rapt watching his friend solo in concert, love and admiration shining from his eyes.  Van den Eeden films them in intimate close-up, but when they enter their new schoolyard for the first time, he zooms out, the two becoming part of a much larger world.  And that larger world instantly views one boy resting his head on another’s shoulder as sexual.

At first Léo’s behavioral shifts are subtle.  He begins partaking of group games while Rémi sits on the sidelines.  He asks classmate Baptiste (Léon Bataille) about ice hockey, then takes on the rough sport, questioning why Rémi’s come to watch him practice.  But when riding their bikes home Rémi suggests he might like to try it too and gets side eye, Léo’s distancing becomes palpable.  And when for the first time, Léo fails to wait for Rémi to ride to school, Rémi’s hurt turns into a tearful physical attack in the schoolyard.  Léo begins observing Rémi from afar, concerned but cautious.  Then Rémi fails to appear for a school outing and when the bus returns, an ominous announcement about the children’s parents all waiting for their arrival causes Léo to freeze in his seat, his mother Nathalie (Léa Drucker, "Custody") having to gently talk him off with the slow revelation of what he’s already intuited.

Dhont wisely doesn’t keep his focus on just the two boys but on how families of close friends often intermingle.  As Léo lives and works on his family’s flower farm (a stunning location which registers the change of seasons along with the film’s emotional arc), most of the boys’ time is spent in Rémi’s more relaxed household, his mother Sophie (an exceptional Émilie Dequenne, "Rosetta," "Our Children") and the family dog treating Léo as their own.  Now it is Sophie who Léo observes from afar, yearning for her comfort.  The two will engage in a tentative dance of shared grief, guilt and forgiveness.

Besides his exceptional ensemble (Kevin Janssens portrays Rémi’s dad, breaking down in one scene; Marc Weiss is Léo’s; both sets of parents reflecting their sons’ personalities), Dhont expresses ideas and emotions visually, repeating images.  After seeing Léo spoon Rémi in sleep and hearing the boy defend their relationship as being ‘like brothers,’ later he’ll slip into older brother Charlie’s (Igor van Dessel) bed and receive the same treatment, the image reversed.  Rémi’s house is approached on foot by Léo three times, important aspects of life there disappearing each time.  The images are supported by composer Valentin Hadjadj’s score, his piece for Rémi’s concert echoing throughout, an aural echo of what has been lost.