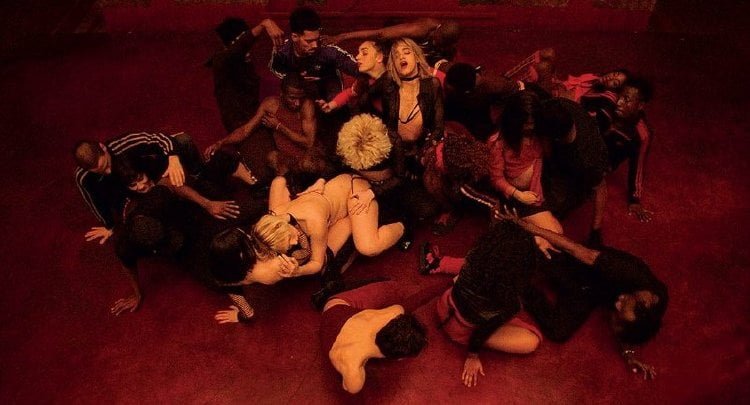 A dance troupe led by Selva (“Atomic Blonde’s” Sofia Boutella) has a spectacular rehearsal in a school auditorium, one whose crosses and sacred heart flag have some members feeling weird vibes. But if the breathtaking talent on display showcases humankind at its best, once someone slips acid into the celebratory sangria, everyone regresses to their most bestial impulses in French provocateur writer/director Gaspar Noé’s “Climax.”

Since his feature theatrical debut with 1998’s “I Stand Alone,” writer/director Gaspar Noé has been pushing the limits with films featuring incest, rape, drug use, extreme violence and murder. Now he’s produced a film that features all of his taboo busters and yet, surprisingly, it may be his most accessible to date. There’s still plenty to upset the easily offended, including a pregnant woman being kicked in the stomach, and Noé’s graphically announced themes (‘Life is a collective impossibility,’ ‘Death is an extraordinary experience’) are debatable within his own film, but this is a film that grabs you from its opening shoot and never lets go. “Climax” pulses with life, death, sex, music and dance. The film opens with a striking overhead shot of a woman skimpily attired in a sleeveless black leotard struggling through a white blanket of snow to Gary Numan’s ‘Trois Gymnopedies.’ She finally collapses, exhausted, and creates an anguished snow angel, blood evident on her person. ‘You have seen a film based on real events,’ announces a title card, before end credits begin to run. No, the projector did not mess up. Scratch cut to an old school TV with a pile of provocative books on its left, DVDs on its right (‘Possession,’ ‘Salo,’ ‘Suspiria...’), a ‘frame’ encapsulating talking head introductions of all the diverse dancers we are about to see. Pay particular attention to their fears, as many will face them head on and one may be lying through her teeth. Many dream of America where the troupe is set to tour. It is 1996. The dance that greets us in that school gymnasium is simply astounding, a melding of krumping, voguing and gymnastics performed in ever changing configurations by dancers of both genders and every color wearing all manner of dress and footwear. The dance is so energetic, so imaginative, so perfectly executed by so many different performers, it just may be the most jaw-dropping dance performance I’ve ever seen. The dancers seem to know their power, all giddy when the music stops to Selva’s praise. Noé, who’s shot the sequence straightforwardly with a few fluid zooms and floating overhead shots (he handles the actual camera here while his “Into the Void” cinematographer Benoît Debie lit the film), begins to follow pockets of dancers as they chat and begin to dig in to the buffet, including Emmanuelle’s (Claude Gajan Maull) sangria. We learn that Gazelle’s (Giselle Palmer) brother Taylor (Taylor Kastle) doesn’t care for her boyfriend Omar (Adrien Sissoko) and that Sara (Sarah Belala) has a heavy coke habit. There is a lot of gossip about ‘walking STD’ David (Romain Guillermic), who has apparently made his way through most of the female dancers and is now targeting Selva. Lesbian lovers Psyche (Thea Carla Schott) and Ivana (Sharleen Temple) don’t seem to be getting along. The men don’t seem to care much about the pregnancies which have anguished many of their female counterparts, including Emmanuelle, who is now happy she decided to keep the adorable young son, Tito (Vince Galliot Cumant), the troupe dotes upon. Some of the dancers keep on dancing to the tunes spun by DJ Daddy (Kiddy Smile) and eventually another group forms, individual dancers entering a circle formed by others performing moves with such precision, Noé’s overhead shot captures things like swirling hair as if they were artificially animated. Noé signals a change by presenting cast credits in the middle of his film before landing on a closeup of that punch bowl. Selva isn’t feeling quite right and Psyche’s standing urinating on the dance floor. People begin to realize they’ve been drugged and look for a culprit, non-drinker Omar immediately targeted and physically ejected from the building by a mob already out of control. Tito’s wandered in from his sleeping space and his panicked mother grabs away the sangria he’s picked up, locking the terrified child into an electrical closet to keep him safe. Lou (Souheila Yacoub) becomes sick, but it’s not because of the sangria, which she hasn’t had, but the pregnancy she confesses to Selva. Another dancer attacks her. Sara’s shoved by a colleague looking for coke, her hair catching fire. Then the lights go out, introducing the red glow of emergency lighting and Noé’s hell, his camera climbing the walls and turning upside down. By the time cops with police dogs throw open the gymnasium doors the next day, they will find the aftermath of an orgy and more than one dead body. No matter what you think of Noé’s films, they have always been meticulously crafted and this one is no exception. The freaky camerawork in the film’s second half is very effective, its disorientation appropriate for a world turned upside down both literally and figuratively. The music, by such artists as Daft Punk, Aphex Twins and Soft Cell, never stops, ending, as it began, on a softer, less driving note (with the Rolling Stones’ ‘Angie’). Boutella, the only professional actor, has been perfectly cast, not only for her exotic look, but for her extraordinary personal descent into madness (in one moment, she slides her hands into her black tights, then becomes alarmed at their ‘capture’). Noé combed clubs, balls and Internet videos for his dancers, almost all of whom carve out distinct personalities in addition to their skillful moves. I’m not sure Noé’s made his point about humans’ inability to live collectively, especially after exhibiting such beautiful collective art, but “Climax” does demonstrate how one bad actor can destroy the dreams of many and he leaves us with a clue as to who it probably was. Both ‘sides’ of his film, the light and the dark, are unforgettable. Grade:

A group of dancers gather in a shuttered boarding school for three days of rehearsal. They work hard and, when they finish, the troupe’s leader, Emmanuelle (Claude-Emmanuelle Gajan-Maull), orders everyone to have a party. She provides a giant bowl of sangria for the celebration, but what begins as a joyous gathering turns into a nightmarish hell in “Climax.” I know what some people will say of Gaspar Noe’s latest film: WTF?! And, those people would be correct – for them. For me it was a surreal and bizarre group character study that tells its “story” with a loud, driving disco beat and lithe movement of the dancers. Noe’s roving camera moves fluidly around, over and through the long dance number that introduces the skill and grace of all the players. The film begins with a high, overhead shot of person staggering over a frozen field, collapses and crawls and then lies motionless. Then, the credits roll. Following this are video interviews of dancers explaining what their art means to them. The dancers next all perform the abovementioned elaborately choreographed and extremely physical number that, in conjunction with the video interviews, establishes every character, even little Tito (Vince Galliot Cumant), Emmanuelle’s young son. “Climax” is also a mystery story as the dancers realize that the sangria was laced with LSD and the question of whodunit runs through all the strange happenings that ensue, as everyone trips out in their own way. For some, it is good, but for most it is a descent into a Dante’s Inferno-type horror dream. I have my opinion on who spiked the sangria. The LSD, and who did it, is just the catalyst for Noe’s fascinating experiment of light, movement and psychological breakdowns caused by the drug. I could not take my eyes of the constant action as the camera moves in and out of the centers of that movement. I can understand the WTF reactions that I have seen. “Climax” is certainly not for the average bear that goes to the movies expecting a beginning-middle-end story arc. It is more an in-the-moment film as we, along with the characters, have the visceral experience of the descent from joy to a hell they all enter. This is about the closest I will ever get to having and acid trip.