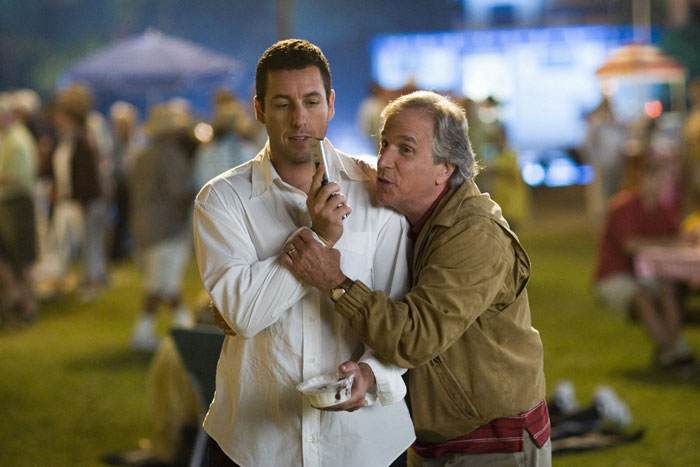 Michael Newman’s (Adam Sandler) life is out of control. He works long hours for his boss (David Hasselhoff) designing the architectural wonders that, he hopes, will get him a promotion and the easy life. His beautiful, neglected wife, Donna (Kate Beckinsale), and adorable, neglected kids, Ben (Joseph Castanon) and Samantha (Tatum McCann), never see him. Heck, he is home seldom that he doesn’t even know which remote works which gadget. What he really needs is a universal remote control for his life. But, Micheal should be careful what he wishes for, he might just get it in “Click.”

Michael Newman (Adam Sandler, "The Longest Yard") is overworked and keeps disappointing his family when a late night visit to his local Bed Bath & Beyond introduces him to Morty (Christopher Walken, coasting as the counterpart to "Bruce Almighty's" Morgan Freeman), a back shop mechanic who gifts him with a very special Universal remote. Michael soon discovers the device does more than automatically understand what equipment he wants to work - it can put his life on hold, rewind and fast forward, too. Michael thinks he's found the answer to overwork but makes a profound mistake when he chooses to "Click." Adam Sandler's gathered his usual family around him for his other oeuvre - the one not targeted at adolescent boys - but while he's been surprisingly effective wearing this persona ("The Wedding Singer," "50 First Dates," "Spanglish"), "Click" doesn't quite cut it. Most likely a well intentioned reaction to the death of both his father and beloved dog Meatball, "Click" plays like "It's a Wonderful Life to the Future" with superior makeup effects (by veteran Rick Baker, "X-Men: The Last Stand") but subpar writing and production values. There's no bigger cliche than the dad who must learn that his family is more important that the job that keeps them and the concept of being careful of what you wish for, especially regarding time manipulation, is the theme of several old episodes of "Twilight Zone." At least give writers Steve Koren and Mark O'Keefe some credit for being careful with their time gimmicks. Michael cannot rewind to recapture the thing's he's missed from fast forwarding because he goes into 'autopilot' and must remain a mute observer of the action and he cannot learn from his mistakes, like redefining a 'quickie,' because his remote learns from his behavior. But there's nothing fresh here and a couple of good ideas - references to those beloved dysfunctional Simpsons, an amusing bout of language translation, an ongoing battle with a materialistic neighbor kid - are largely undone by some bad ones - a futuristic Colin Farrell reference, an extended fart joke and the failure to carry through with the neighbor as Michael ages. Director Frank Coraci ("The Waterboy"), who has done solid work with Sandler in the past, serves up a film that feels shopworn. Production design (Perry Andelin Blake, "The Longest Yard," "The Benchwarmers") is somewhat cheesy, the Newman's home strongly evoking Ray Romano's TV abode. The Bed, Bath and Beyond product placement is just plain wrong. After its appearance in "Bewitched," one must ponder why filmmakers think it has a mystical aura. The performances, on the other hand, are mostly quite good with Sandler's dismay at his escalating loss of control palpable. He'll be accused of schmaltz I'm sure, but the guy makes his regret feel very real, even if he hasn't the sense to demand the score toned down during his big emotional scene. Kate Beckinsale ("Underworld: Evolution"), in one of the weirdest bits of casting of recent note, turns into an American housewife and young Joseph Castanon and Tatum McCann are terrific as kids Ben and Sam (and look so much like siblings I was surprised to discover they were not). Henry Winkler ("The Waterboy") is both amusing and moving as Michael's dad Ted and nicely paired with the more comedic Julie Kavner (the voice of Marge Simpson) as mom Trudy. David Hasselhoff (TV's "Baywatch) pokes fun at his own plastic persona as Michael's boss and watch for an uncredited Rob Schneider disguised as client Prince Habeeboo. The only disappointments are Walken in an unenergetic turn, and the usually reliable Jennifer Coolidge ("American Dreamz") in a poorly written role as Donna Newman's best friend with a history of sleeping with her lover's brothers. "Click" is being marketed like an A-list flick, but it belongs in the B bin. Catch it on cable.

Adam Sandler, the writer/producer/star, has both hits than misses in his resume of comedies. I enjoyed the chemistry between him and Drew Barrymore in “The Wedding Singer” and “50 First Dates” and take great guilty pleasure with “The Water Boy,” but I’m not really a member of the Sandler Fan Club. “Click” falls in the larger camp of films like “Happy Gilmore” and Billy Madison,” amusing but not something I would bother to watch again. Michael, in an attempt to bring a semblance of order into his life, heads off to Bed, Bath & Beyond to find a much-needed universal remote control. He stumble upon the Beyond part of the store where a odd man named Morty (Christopher Walken) appears to be the only one working in the strange department. He knows exactly what Michael needs, reaches up on a shelf and hands him a brand new, experimental remote. Confused but satisfied, Newman heads home with his new toy. Michael, with the promise of a partnership in the firm, pulls out all stops to land a lucrative design contract with a Japanese corporation and, once again, cancels the long-planned camping trip with the family. Working late into the night, he is bothered by the barking of the family dog and, on impulse, hits the mute button on the new remote. The barking stops. Michael knows he has something very special in hand and begins experimenting with the gadget. It appears to be just the thing he needs to set his personal life straight, until it starts programming itself. Life will never be the same for Michael. The be-careful-what-you-wish-for story (which is, I think, one of the three original stories that all others derive from) has been done many times before. The “Click” screenplay by Steve Koren and Mark O’Keefe, with its travel through time spin, has some clever aspects to it that make it amusing. Not, for me, laugh out loud funny but I did smile occasionally. The cast of “Click” is better than it has a right to. Christopher Walken has a twinkle in his eye as the enigmatic Morty and makes the most of his 2-D character. Kate Beckinsale is, initially, too beautiful for the part of the loving wife but soon makes the role hers. Henry Winkler and Julie Kavner do yeoman’s work as Michael’s mom and dad. David Hasselhoff is miscast as the horn dog owner of Michael’s firm. Jennifer Coolidge does her usual stock character as Donna’s best friend, Janine. Techs are OK as we see Michael fast forward, reverse, pause and mute through his life. Makeup is well handled as the characters age. Adam’s fan club will be up for this one. Others may want to see something else.