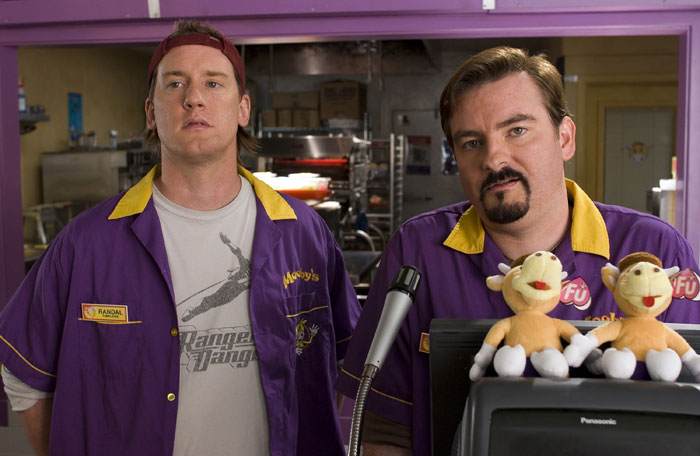 We came to know and love Dante Hicks (Brian O’Halloran) and Randal Graves (Jeff Anderson) back in 1994 as we followed them for a day at the Quick Stop convenient store. About a year ago, Randal screwed up big time and his carelessness burned their beloved workplace to the ground, giving the pair a chance to explore a brave new world. Instead, they take low-paying, no-thinking jobs at Mooby’s, the local fast food chain restaurant, and they fall into a rut in “Clerks II.”

Little has changed in the lives of our dynamic duo except for one thing. Much to Randal’s chagrin, Dante is getting married and is moving to Florida with his rich fiancée, Emma (Jennifer Schwalbach Smith). It’s Dante’s last day at Mooby’s and his best friend, despite mourning his loss, plans a big surprise for his bearded buddy. But this smutty soiree is just the capper the series of events that take place in their little world. Joining Dante and Randal at Mooby’s is teen geek, Elias (Trevor Fehrman), a kid who is very naïve and the exact opposite of the foul-mouthed Randal. These two have an ongoing verbal battle over which movie franchise is better – “Star Wars 1-3” or “The Lord of the Rings” – and Randal has some very specific comments on what he thinks of the hobbit movies. It ain’t pretty. Which leads me to a warning for the prudish or faint-hearted. If you are a member of either club then “Clerks 2” is definitely not the film for you. For the rest of us, there is a load of cussing, raunchy discussing, bestiality (or, as called here, animal eroticism”), crude and rude humor and the much-heralded return of those ultimate slackers, Jay (Jason Mewes) and Silent Bob (director Kevin Smith). This other dynamic duo, with the Quick Stop gone, is now selling their pot leaning against the wall outside of Mooby’s. Jay is in good form, no longer frequently sampling his own product, and, besides chiding everyone that crosses his path, is fixated on “The Silence of the Lambs” (and to good affect). Smith keeps up the chain-smoking muse-to-Jay character and has his usual breaking silence moment, cleverly handled. There is an extra dimension in “Clerks II” that elevates it above the typical raunchy guys’ flick: Rosario Dawson as Mooby’s manager Becky. Even though Dante is about to get married, you know there is something there between the pretty down-to-earth boss and her underling. This is made very apparent in a scene where the two discuss Dante’s pending marriage and move while he does her toenails. The chemistry between the two, and their story, adds a nice dynamic to the film, making it appealing despite the outrageous button pushing by Smith. Dawson helps give the film heart and embodies love, but Randal also shows his softer side as he realizes how important his friendship with Dante is. Jeff Anderson (quite a bit chunkier) actually mixes compassion into his nasty talking, say-anything-to-anyone rude boy as he waxes sentimental over losing his best friend. Techs are straightforward as the Smith and crew shift the action from the shabby Quick Stop to the more sterile fast food franchise, Mooby’s. Helmer Kevin Smith uses the locale to good effect and populates it with all manner of clients, including Ben Affleck (briefly) and Jason Lee, having fun with his made-it-rich guy. Clerks II” is a warm-hearted, rude and, ultimately, happily-ever-after story with familiar characters and fresh and new, like Dawson. It pushes a boatload of buttons as it lays bare all manner of political and social incorrectness and takes no prisoners in the process. Smith is out to shock, titillate and entertain you and pretty much succeeds. Again, beware the profane and vulgar.