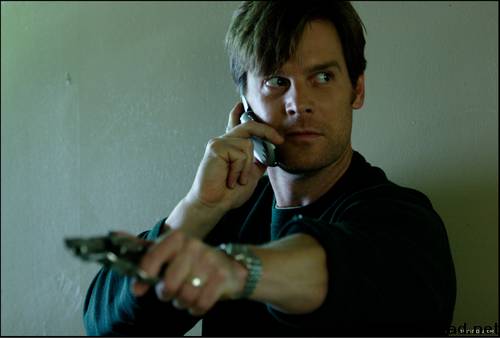 Life sucks for Terry Allen (Peter Krause). He got fired from his CPA job and can’t finance the house that his fiancee, Marla (Kari Matchett), so badly wants. Now, he has too much time on his hands while job searching and notices that his new neighbor, whom he calls “the Middle Eastern guy, acts suspiciously. Terry clandestinely follows the man, knowing he must be up to no good, and duly reports his suspicions to the FBI to show his “Civic Duty.”

When Terry Allen (Peter Krause, HBO's "Six Feet Under," "We Don't Live Here Anymore") loses yet another accounting job his wife Marla (Kari Matchett, 2007's "24") is supportive - until, that is, Terry becomes obsessed with the new neighbor downstairs. Gabe Hassan (Egyptian actor Khaled Abol Naga) is of Middle Eastern extraction and Terry feels watching the man's suspicious moves is his "Civic Duty." This little paranoid thriller from writer/producer Andrew Joiner and director/editor Jeff Renfroe does a superb job exploring how middle class feelings of entitlement to the American Dream are reflected in post 9/11 racial stereotyping. When a man doesn't get what he wants during an economy driven by rising gas prices and recession, he turns his rage against the foreigners who have usurped his way of life and brands it patriotism. Terry's simmering emotions are on display when the teller depositing his severance informs him of the 'ATM machine' that does not require her assistance. At home, he stares at the house listing posted on his apartment's freezer door. His encouraging and maritally flirtatious wife is accused of still lusting for an ex-boyfriend. Humming with hostility, Terry is awake in the middle of the night when he hears his neighbor, who he watched move in with little in the way of possessions, emptying trash into the dumpster. Terry investigates and finds scores of envelopes from an organization called 'Sons of Benevolence' and begins a web hunt that leads him to the FBI's most wanted list by dawn. After Marla leaves for the day, Terry tries to job hunt, but he keeps returning to his 'rear window' and finally calls his suspicions in to the FBI. Agent Hillary (Richard Schiff, "People I Know," "Ray") initially treats his concerns with restrained sincerity, but as Terry's agitation mounts so does his aggression and those who sought to support him are alarmed to find themselves on the opposite end of a violent standoff. Cinematically, "Civic Duty" is a pretty bare bones movie, an extended teleplay of limited spacial scope, but it is very smartly written and Jeff Renfroe knows how to bring a low simmer to a rolling boil. In addition to being an interesting character study and, to a lesser degree, portrait of modern marriage, the film has many dimensions. There is its central post-9/11 conflict and the filmmakers give voice to both the victimized and those fingered as terrorists ('What would *you* do if your wife was blown to bits cooking dinner?'). The conflict of cowardice and bravery is explored, as is the third world price paid for American democracy (Allen's thoughts are interrupted throughout by newscasts spouting the voice of George W. Bush). Their insinuation of economic flags - the price ticking upwards on a gas pump, American jobs lost to impersonal technology - are scattered seeds of discontent that wear away at Allen's rationality. "Civic Duty" is a challenging small film that builds to a tense roar and it would be a good accompaniment to the femme-powered "Sorry, Haters." It's only drawback - a decision to have it both ways - can also be seen as intellectual provocation.

Director Jeff Renfroe tells a story of paranoia run rampant as Terry stalks his neighbor, Gabe Hassan (Khaled Abol Naga), convinced that the man is part of a terrorist ring. When he observes him taking stacks of deposit envelops from an ATM, using a pay phone, though he has a cell phone in his pocket, running a laboratory in his apartment and taking out the trash at 3:00 AM, Terry does his duty and calls the FBI. Agent Hillary (Richard Schiff) responds to the call but assures Allen that his fears are unfounded. However, Terry knows that he is right and sets himself to expose the “terrorist” before he can do any harm. The story, by Andrew Joiner, ratchets up right from the start as Terry becomes obsessed with Gabe and Marla accuses him of being both paranoid and racist. Out of work, he does the job hunt thing but spends most of his time watching the War on Terror on the news. When Hassan moves in next door, his obvious Arab-ness and his visitors – all looking suspiciously Middle Eastern – and strange behavior raises an alarm in Terry. When Agent Hillary warns him off, he takes the law into his own hands. His increasing paranoia turns him from dutiful citizen into the thing he accuses Gabe Hassan of being – a terrorist. Civic Duty” is an exciting, tense drama that appears to go along the predictable route of paranoia and obsession. But, it is done with style and surprise with its twists and turns and an ending that I did not see coming. The acting, from the small but reliable cast, is well led by Peter Krause as Terry. He gets under the skin of Terry Allen, making the character full dimensioned and keeps you wondering if he is right or not about Gabe. Kari Matchett, a new face to me, does a credible job as Marla, a woman who loves her man but is intelligent and can also recognize his obsession with Gabe. Richard Schiff is terrific in the small role as FBI agent Tom Hillary, a man who wants to bust in on the bad guys and bring them to justice but knows that procedures, and the Constitution, must be followed. Newcomer Khaled Abol Naga starts off as a seen-from-a-distance villain but, because of Terry suspicions, becomes a victim. Techs are on a par with the script and the acting. Cinematographer Dylan MacLeod’s lensing helps keep the tension ramped up with tight, fluid camera work. Art direction, by Tyler Jones, though simply and straightforward, fits the production like a glove, especially Gabe’s sparse apartment as suspicious lair. The film looks and feels assured and well thought out, making it belie its independent film budget. Just because you are paranoid, it does not mean they are NOT out to get you!