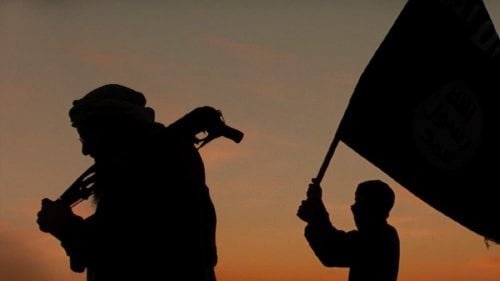 In 2012, the Arab Spring took hopeful hold in much of the Middle East, including Syria. In 2014, ISIS reared its ugly head and “liberated” the city of Raqqa and declared the creation of the Islamic State Caliphate. The so-called libertion ravaged the population of the city with murder, hunger, disease and brutal executions. A dedicated group of Syrian citizen journalists put their lives on the line and formed “Raqqa is Being Slaughtered Secretly (RBSS)” to report to the world the inhuman horrors taking place in the “City of Ghosts.”

The Arab Spring fomented uprisings across the Middle East, Syrian citizens long repressed by the Assad regime finding the courage to revolt. Raqqa was the first to succeed in driving out government troops, celebrating by toppling Assad's statue. But a leadership vacuum was an opportunity for ISIS, who declared Raqqa the capital of their Islamic State, turning it into a "City of Ghosts." When you see news video of oppression, you may take it for granted it's been shot by a professional reporter, but that is often not the case. Back in 2009, the Norwegian "Burma VJ" showcased the incredible bravery of citizen journalists in Myanmar. Now documentarian Matthew Heineman ("Cartel Land") follows four members of Raqqa is Being Slaughtered Silently (RBSS), a group consisting of ordinary citizens, many high school and college students, who risk their lives even in exile in order to tell the world what is happening to their home. Using their perspectives and footage, Heineman covers the subject from all angles, including ISIS's brainwashing of children, their development of sophisticated media and the hostilities faced by RBSS refugees in the West. ISIS drives in guns blasting, loudspeakers blaring. Random executions create chaos. Communications with the outside world are shut down, only ISIS propaganda getting out. We're led into the story by RBSS cofounder Aziz, the group's spokesperson forced to flee Raqqa who remembers being an apolitical college student not that long ago. We see him accepting the 2015 International Press Freedom award in New York. Hamoud is his even younger cofounder, an introvert who believes the camera is more powerful than a weapon. In one of the film's most harrowing moments, we watch Hamoud watch the slickly produced ISIS execution of four men, his father and brother among them, meant as a warning. He vows to continue. We see images of RBSS crucified in Raqqa's center and a toddler slashing a teddy bear's throat while parroting 'God is great.' When news gets to Turkey that ISIS, unable to stop RBSS reporting by tracing satellite signals, has outlawed satellite dishes, we see video of them being destroyed. R.E.S.P.E.C.T. There are few moments of levity, although the camaraderie of these men, reporting from the Turkish border, is palpable. But when a prominent Syrian revolutionary is gunned down in broad daylight in Turkey, they once again pick up roots, moving to Germany to join Aziz. There are protests on the streets against these men, yet the Berlin police offer protection to the RBSS. Mohamad's wife Rose loves the snow. One of the group attempts to take a selfie with another. 'Dammit, I'm shooting video,' he says laughing. Grade:

There are a number of documentary films about the conflict in Syria. Recently, the Oscar-nominated short documentary, “The White Helmets,” showed the heroes in the war torn country who run toward an explosion to rescue survivors, not away from it. The feature length doc on the White Helmets, “Last Men in Aleppo,” is now airing on PBS stations. “City of Ghosts” goes where no professional western journalists can or would be willing to go. The reporter of the RBSS are not professionals but ARE in the heart of Raqqa, bringing to international light the true face of ISIS and its atrocities in that city. Documentary filmmaker Matthew Heineman, Oscar-nominated for “Cartel Land (2015),” brings together, on camera, some of the key players in this harrowing investigation into life in Raqqa under the bloody hand of ISIS. Although four of “The Raqqa Guys” are the focus of this disturbing and enlightening secret view of ISIS, the many members of RBSS, though not seen on camera, are all given their due for their bravery and sacrifice. Aziz is just 25 and a co-founder of RBSS; Hamoud began documenting the Syrian rebellion in its early days; Hussam quit law school and is also a co-founder of RBSS; Mohamad is a school teacher turned reporter to, with their many colleagues working inside the city, expose ISIS and bring the civilian plight in Raqqa to international light. The members of RBSS are in mortal danger every day from ISIS, forcing them to go underground in the city. But, the above Raqqa Guys and others were forced to escape the city, under the threat of certain execution, to continue there fight against the Caliphate. But, though ensconced “safely” in Turkey and Germany, they are still in danger. Be warned, the filmmakers pulls few punches in showing the graphic brutality of ISIS executions – many of whom were close to members of the RBSS. The film also has a cloak-and-dagger element as The Raqqa Guys are forced to hide in plain sight while ISIS uses every tool at its disposal to find and kill The Raqqa Guys. “City of Ghosts” is a powerful documentary that exposes ISIS and its machinations to a degree we have not seen before. The danger The Raqqa Guys place themselves in, secretly taping in the city when even a hint of such would mean certain death, shows us a dedicated band of individuals united to bring out the truth.