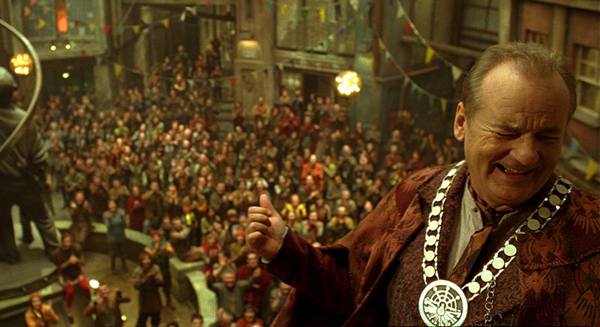 The world as we know it is coming to an end. The apocalypse is upon us and The Builders have put into play a plan that will keep mankind alive for another 200 years. They put together an important time capsule that, when it opens, will guide the underground-dwelling survivors back to the earth's surface to give man a second chance. The capsule goes astray some 153 year into the two-century grace period and, when the fateful last day comes, the survivors have no instructions on how to escape the "City of Ember."

After being nominated for an Oscar last year for "Atonement," fourteen year-old Saoirse Ronan has a disappointing followup with the dismal, dramatically inert "City of Ember," the tale of an underground city programmed to wait out apocalyptic happenings on the surface 200 years earlier, now run by a corrupt Mayor (Bill Murray). Increasing blackouts, just one symptom of Ember's antiquated infrastructure, are making the citizenry nervous and Lena (Ronan) and her childhood friend Doon Harrow (Harry Treadaway, "Brothers of the Head," "Control") are determined to find the exit which Lena discovers The Builders had planned for all along. The cast is populated with the likes of Tim Robbins (Doon's dad), Mary Kay Place, Martin Landau, Marianne Jean-Baptiste and Mackenzie Crook but no one brings anything special to the proceedings. F/X are hit (a giant mole) and miss (an unconvincing getaway via water chute) and the film plays like "Bee Movie" in a bomb shelter.

Sophomore helmer Gil Kenan (who directed the delightful, scary "Monster House") takes an ambitious step the second time out the gate with a cautionary tale, adapted from the Jeanne Duprau book by Caroline Thompson. Things get right to the point as the group of elders prepares the time capsule that could save humankind. In it are the instructions and keys that will set man back on course to repopulate the earth. This dramatic, foreboding moment is followed by a quick flash of the coming years as each mayor of the City of Ember hands the capsule to his successor until one of them dies before he can hand off the hope of man. Flash forward to the last days of the two hundredth year and Ember is having some serious problems ­ blackouts for one thing, a real problem ffor an underground city. It is under this dark specter that Lina Mayfleet (Saoirse Ronan) and Doon Harrow (Harry Treadway) prepare for the all-important Assignment Day when the young are appointed to the jobs that they will have for a lifetime. Lina's big wish is to be made a Messenger and Doon craves to be an electrician's assistant working on the city's vital generator. Neither gets their wish. Then Doon has an idea. Why not swap jobs? When she learns that he got the Messenger assignment, she jumps at the chance. Doon will, at least, be closer to his precious generator with his job as a Pipeworks Laborer. The blackouts begin to increase in frequency and longevity when Lina finds the missing time capsule. The instructions are there but are in tatters after Lina's little sister tried to eat them. Lina recruits Doon to help her fill in the missing pieces and, together, race against time to find the way to the surface and save their world. Meanwhile, the corrupt mayor of Ember (Bill Murray) is hoarding food, creating shortages for the hungry population. Lina and Doon discover the hoard and must also race against arrest by the mayor's henchman (Toby Jones). While "City of Ember" is a beautifully crafted film that is stunning to look at, the story is flat and never really develops the excitement one expects. The two young leads are supported by veteran actors Murray, Jones and Tim Robbins, though none brings anything special to the table. Visually, the film has a similar look and feel to Alex Proyas's "Dark City." While the latter film maintained a sinister sense of menace, "City of Ember" never does. Excellent techs do not make up for mediocre storytelling. There needs to be a balance between look and substance and "City of Ember" fails in finding that balance. It does have two likable teen actors as role models for the audience at which it takes aim. Anybody over 15, though, should look elsewhere.