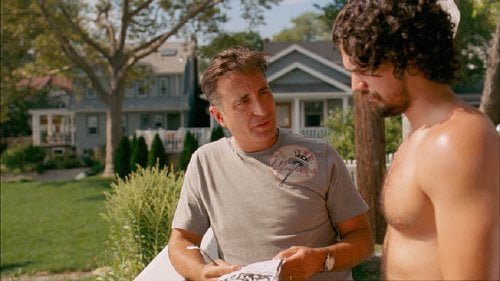 Correctional officer Vince Rizzo (Andy Garcia, "Ocean's Thirteen") has always wanted to be an actor, but he keeps his acting classes in Manhattan a secret from his wife and family. When a second, bigger secret presents itself in his line of work, he's not only tasked to use it as an acting exercise, but brings his illegitimate son Tony (Steven Strait, "10,000 B.C.," "Stop-Loss") home on probation. His wife Joyce's (Julianna Margulies, TV's "E.R.," "The Good Wife") demands for a bathroom addition in their boat shed provides a cover for the young man now lodging behind their house on "City Island."

After setting his "Two Family House" on Staten Island and "The Thing About My Folks" on Manhattan Island, writer/director Raymond De Felitta moves on to his third New York City borough/island with his latest family comedy. This one is less house centric than his first, but is firmly routed in a most unusual part of New York. Like "Two Family," a young British woman is a perceived threat to the family, but in "City Island" everyone has their secrets. The first secret revealed is an amusing visual. Vince wedges himself halfway through a bathrooms skylight in order to smoke a cigarette while reading a book on Brando (of course, you can guess that the wife he's hiding this habit from will also be 'caught' smoking). When Joyce reminds him their daughter Vivian (Andy's daughter Dominik García-Lorido) is coming home from college for spring break, he responds he's got a poker game that night. Joyce is becoming pretty sure these poker games are a cover for an affair. Meanwhile, Vivian is trying to switch her shift as a dancer at a strip joint, having forgotten she's supposed to be on spring break. At home, younger wisecracking brother Vince Jr. (Ezra Miller), is feeding his addiction for very large ladies via the Internet, where he has just discovered their hugely obese neighbor Denise (Carrie Baker Reynolds) makes her living sating appetites like his with a website. If the above description sounds like overplotting, well, it is, much of it overly telegraphed as well, but the film keeps clicking largely due to the very appealing performances of Garcia and Margulies (almost unrecognizable in a straight haired wig and Bronx accent), who not only are believable as a long married couple, but a couple that still has simmering chemistry beneath the simmering hostilities. Steven Strait, as the wild card introduced into the family, is also a major plus as the hunky laborer who tempts Joyce while acting as the audience POV into the family insanity. He's not in on the secret that involves him, either, which makes his reactions (he notes all the secret smokers) entertaining. There is another external force in the person of Molly (Emily Mortimer, "Shutter Island"), who is assigned to partner with Vince on that 'secret sharing' acting exercise (and conveniently become the suspected other woman). The more experienced actress encourages Vince to try his first professional audition (a priceless sequence which Garcia has a lot of fun with). Mortimer, unfortunately, has a less well written character to work with and doesn't make her very compelling. The Rizzo children share a similar fate. García-Lorido is OK as Vivian and her story could work, but her secret's reveal is lost in a messy climax that tries to tie too many story strands together. Ezra Miller is actually an interesting presence as the irreverent Vince Jr., but his obsession with wanting to feed obese ladies is just plain offputting and has no subtext within the overall framework. If Vivian is easily dismissed in the climax, Vince Jr.'s left as an onlooker from his neighbor's porch in cutaways that don't even look like they were shot under the same conditions. Alan Arkin ("Little Miss Sunshine") has a well written speech condemning Brando-esque pauses in acting, but his role is little more than a cameo. Even with these flaws, though, De Felitta delivers more than not, especially bringing a little known location to light. City Island may be part of the Bronx, but it is located in Long Island sound and is an old fishing community more reminiscent of New England. His writing runs from the obvious (everyone responds to Vince's occupation of corrections officer as 'oh, a prison guard!') to the subtle (Denise's code word is Botero) just as his story construction does, but there are many true moments leading up to a conclusion that slides off the rails.