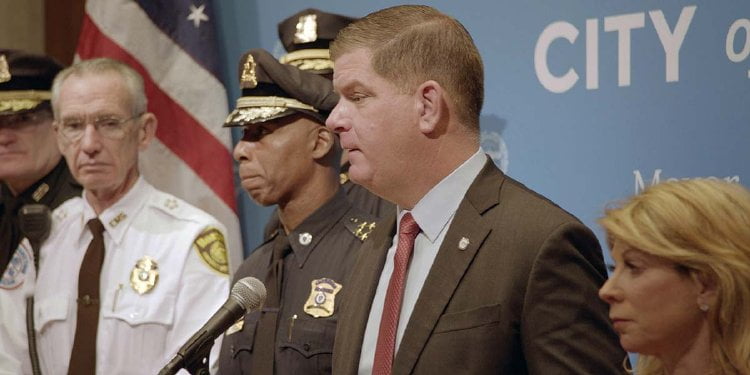 National treasure Frederick Wiseman’s 46th documentary takes place across the river from his home in Cambridge, Massachusetts, focusing on the local government of Boston, its Democratic mayor Marty (make that ‘Mahty’) Walsh and the workings of “City Hall.”

Wiseman has called his latest documentary ‘anti-Trump,’ because his subjects believe in democratic norms and indeed, it is a love letter to a functioning government of the people, for the people and by the people.  It is also a typical Wiseman film, with its fly-on-the-wall approach to showing how things work, his love of bureaucratic meetings and his use of buildings, street signs and the streets themselves as segues from one subject to the next.  With “City Hall,” the ninety year-old also indulges in machinery, from garbage trucks chomping down on mattresses and gas grills to fire truck platforms which extend and retreat to the creation of bus lanes by applying red thermoplastics to asphalt.

Wiseman’s documentaries tend to be lengthy, but this one really tips the scales at four hours and thirty-six minutes.  And yet, as with all his films, what one begins by taking a deep breath for endurance wraps with time having passed far more quickly than one would have imagined.  We watch Walsh rally various department heads around his newly assigned point person, paving the way for smoother interdepartmental coordination in aiding the public.  And while the director visits countless different areas of city government from building inspections to the planning and execution of the 2018 Red Sox World Championship parade, the focus is clearly on policy which helps the disadvantaged, from immigrants to those in poverty to the disabled.  Climate change gets addressed early as well in a meeting with developers in which Walsh stresses the resilience of the harbor.

Some of the film’s real bright spots include a Latina woman lecturing other women on how to value themselves and speak up for equality in the workplace, a young veteran’s tale of connecting with his elderly neighbor via a rifle he collected signatures on and a rousing planning meeting in Dorchester’s poorest neighborhood where a new pot shop hopes to open.  The city’s resistance to our current federal administration comes up time and time again, once in a notable pushback on a changing HUD rule which will set back civil rights.

Even at over four hours, not every aspect of city government makes it to the screen.  Having addressed the workings of a public library in “Ex Libris,” all we hear about Boston’s is a need for more planning for the disabled, yet curation and research come up in a far more niche archeological office.  The film is well edited, often using music organic to one scene to bridge to the next.  Yet “City Hall” can lack the liveliness of Wiseman’s very best, with few personalities other than Walsh made memorable.  Humor, too, is lacking, with one notable exception listening to two men talking their way out of parking fines.  These are minor criticisms, though, in a sprawling work which is a solid pushback against those arguing the value of ‘small government.’

Wiseman wraps at the Boston Symphony Orchestra where the police play bagpipes and a white male officer accompanies a black female one in a stunning duet of our national anthem before the mayor gives his state of the city.  Walsh clearly loves his job and his city and “City Hall” should prove an immeasurable boost to his reelection.

Documentary maestro Frederick Wiseman is known for his cinema verite-style studies of institutions and places around the world. He and his team, once again, take their cameras and give us a fly-on-the-wall look into the bastion of government in Boston MA in “City Hall.”

I took a look at Wiseman’s filmography and it numbers some 48 documentary works, beginning way back in 1967 with “Titicut Follies,” his startling look into the workings, and horrors, of Bridgewater State Hospital in Massachusetts. He continued delving into our institutions ever since. Of late, he has taken us to such places as Queens, NY (“In Jackson Heights (2015)”), “Monrovia, Indiana (2018)” and London (“National Gallery (2014).”

In “City Hall,” Wiseman’s many cameras and “you are here” perspective takes us into the day-to-day workings of Boston Mayor Marty Walsh and his base of operations in the heart of the Hub. We get lots of Marty officiating at various meetings and events during the fall of 2018 through to the winter of 2019 and it is a glowing endorsement for his next election bid.

But, there is more to “City Hall” than Mayor Marty. The documentarians bring us into the many facets of Boston’s city government and the events it holds, like the Boston Red Sox 2018 World Series win and the traditional Duck Boat Parade. We also get a look into the nuts and bolts of the city operations, like the Registry of Births, Deaths and Marriage, the city’s Traffic Control Center, a cannabis licensing hearing, the School Committee, a construction site inspection, a meeting on minority women, the BFD responding to a fire and much more of what makes the city tick.

If I were to put Wiseman’s recent works about institutions and places on a scale, I would have “In Jackson Heights” at the top and “City Hall” a little lower down on the meter. The veteran filmmaker (who celebrated his 90th birthday this year) excels when he delves into the people of his places and looks into how the city works and responds daily.