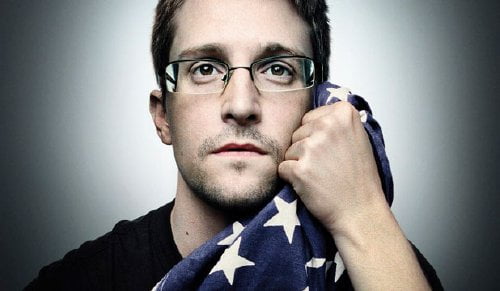 In January 2013, documentary filmmaker Laura Poitras ("The Oath") received an email from a senior government employee in the intelligence community warning her that every move she made, every character she typed, every purchase she made, every border she crossed, every site she visited was in the hands of a system whose reach was unlimited but whose safeguards were not. Five months later, she was in a Hong Kong hotel room filming the man who had signed off as "Citizenfour."

In their April issue, Vanity Fair published a fascinating article, 'The Snowden Saga' by Suzanna Andrews, Bryan Burrough and Sarah Ellison, that documented all the cloak and dagger aspects of Edward Snowden's flight to Hong Kong and the three days he spent with Poitras and The Guardian's Glenn Greenwald and Ewen MacAskill. It was fascinating stuff, but Poitras and her camera have achieved something far more powerful giving us Snowden's own voice during this time, a voice which is far more passionate, patriotic and reasoned that one might expect, given the media coverage of those who sought to discredit him. Poitras, clearly under threat herself, largely keeps her own participation muted, only using her own communications to illustrate the stealth required to get the story out. That a citizen in a country founded on principles of freedom, including speech, should have to operate looking over her shoulder - let alone the whistleblower himself - is scary stuff indeed. Poitras briefly sets her stage with a little background. When a case was brought against AT&T when it was noted their San Francisco switches had been tampered with to monitor all traffic for the NSA, the government tried to get the case dismissed by invoking State Secrets Privilege, a tactic which will not only come up again, but one in which Snowden has been particularly thoughtful, wishing only to expose the illegal activities of his government, not endanger it. In fact, it is quite incredible just how carefully the 29 year-old Snowden planned the leak of his documents. We learn of the levels of encryption, see the emails, hear of the clandestine meeting plan, complete with code phrases and signals. When we first see Snowden as Poitras and Greenwald did, it is still surprising to note his youth. Then he begins to exhibit levels of security that make his interviewers appear naive. The hotel phone is unplugged, because, we are told, VOIP phones can be used as mikes even when inactive. He covers his head when working on a laptop in order to avoid screen detection. When the Mira Hotel's fire alarm sounds, everybody freezes. When MacAskill joins them, we're surprised when he has to ask the young man's name. His anecdotal stories about how anyone in his office could watch whichever drone they chose on their desktop is a jaw-dropping bit of privileged laxity, people's privacy invaded as office entertainment, but a mere drop in the bucket of what is to come. As the strategizing as to what, how and when to release the information goes on, Poitras documents the personal impact on the man who's orchestrated it. The first article, on the NSA's collection of Verizon data, comes out on June 5th. The following day, an article on the system which indiscriminately collects data from the likes of Google, Youtube and Facebook is published. Suddenly, Snowden's live-in girlfriend is being threatened with eviction and is under surveillance by construction trucks which line his street. She has no idea what's going on, nor do his (military) family, in order to keep them safe. As the journalists continue to work on getting the information out, attention must turn to how to get their source out as the media begins to mob the lobby. On TV, President Obama states that Snowden is no patriot and that he'd already ordered reviews of these secret programs, but Poitras has already shown us television clips of direct lies to Congress by the director of the NSA. And so a whistleblower whose actions have led to reforms is charged with espionage, the first time this has happened for leaking information to one's own citizenry. Edward Snowden has been living in Russia, which gave him asylum, for over a year (his girlfriend just joined him there in July 2014). Laura Poitras has chosen to live in Berlin. "Citizenfour" is a hell of an eye opener, even given knowledge of its events. Poitras's documentary makes us feel the danger of government invasion. I'm beginning to think that those gun rights folks who cite the right to bear arms in its original meaning - as militia to defend themselves against standing armies - might be on to something after all. Grade: