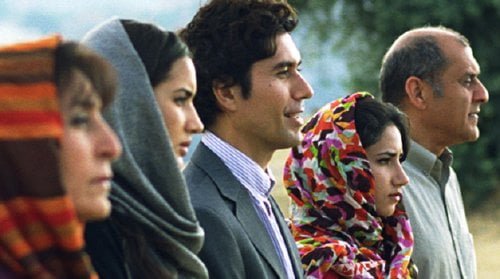 Shireen (Sarah Kazemy) is the daughter of a wealthy Iranian businessman. She and her BFF Atafeh (Nikohl Boosheri), true teens to the core, go through the motions of being faithful Muslim devotees. Secretly, though, they are rebels who want to get dressed up, listen to pop music and just have but risk breaking the taboos that will lead to a dramatic change in their “Circumstance.”

Shireen (Sarah Kazemy), the orphaned daughter of outspoken Iranian professors, is in love with Atafeh (Nikohl Boosheri), a sixteen year-old with wealthy, forward-thinking parents. Atafeh introduces Shireen to Iran's underground, where rebellious youth parties decadently in nightclubs. But when Atafeh's older brother Mehran (Reza Sixo Safai) returns home from drug rehab, he's not the same beloved sibling she used to mess around with. Mehran has, in fact, joined Iran's morality police, and his attraction to Shireen becomes the catalyst for a sea change in his family's "Circumstance." Making her feature debut, writer/director Maryam Keshavarz used her own life experience to show the world both Iran's rebellious underground culture and the repression which threatens the largest percentage of its population's freedoms. This elegantly shot film is well acted and much was achieved with a guerilla production on location in Beirut. Keshavarz isn't always clear in laying out her exposition, though, resulting in a choppy storytelling style which often left this audience member confused. Still, the overall message Keshavarz wants to send is received loud and clear. Shireen is introduced passing a red paper bird to Ateaeh in the schoolyard, then having her character questioned by the headmistress of her high school when her tuition is late. In one establishing scene, Keshavarz uses foreshadowing, tells us about the economic inequality of her protagonists and the prejudice feminine beauty fosters. At home, Atafeh is thrilled that her older brother has returned. The two share the piano bench. Their father, Firouz (Soheil Parsa), oversees Mehran's urine tests, but Parsa lets us know Firouz is no tyrannical patriarch but a loving father who is perplexed that his son is giving up a musical career. At the mosque, Mehran is told 'A true Muslim must work and provide for his family' and responds that God has not yet shown him the way. The family travels to the seaside, with Shireen as their daughter's guest. They play volleyball on the beach, but only the men may swim in the sea. 'One day we can all go together,' the progressive Firouz tells his daughter. That night, Shireen makes physical advances to the accepting Atafeh and suggest they run away to Dubai. The next day they dance madly, lip synching to 'Total Eclipse of the Heart' on American Idol, unaware of Mehran watching from the doorway. He later awakens as if from a nightmare having dreamt of having sex with Shireen. Atafeh pulls Shireen further into her circle, taking her to a party with boys and booze. Hossein (Sina Amedson) from the U.S. and the good looking Joey (Keon Mohajeri) enlist them to dub the movie "Milk," dangerous because of its homosexual content, into Farsi. They do not know Mehran has set up surveillance cameras throughout his home and is spying on them, but he comes out into the open when the morality police raid a nightclub. When the girls are pulled over and arrested because of the former activities of Shireen's parents, Atafeh is subjected to a gynecological exam but Mehran intervenes for Shireen. By film's end, the number of strings Mehran has pulled and the fates which have been dealt in the name of religion is disturbing indeed. "Circumstance" works almost like a horror movie where a stalker follows his intended victim, and yet Mehran's actions have a far broader scope. Cinematographer Brian Rigney Hubbard ("Tanner Hall") frames many of his shots with doorways, either with a character point of view observing from or his camera observing through, evoking the lines which characters may or may not cross. Mehran's laptop screen and camera surveillance provide the God POV. The film's only problem is in its construction, oftentimes one scene not flowing into the next in a disorienting fashion. And while Azar comments that the changes in her son are disturbing, Firouz's capitulation seems abrupt without any emotional underpinning. The largely inexperienced cast are terrific, Kazemy shyly blooming, Boosheri gradually realizing the monster in her midst. Safai's change is eerie, always calm and reasonable. His politically pointed declaration that he does not wish his wife (Mehran weds Shireen in an arranged marriage after her arrest) to sing at his mother's (Nasrin Pakkho) birthday party is chilling. The handsome actor, in fact, has a chilling presence over the entire film. Soheil Parsa is strong support as the wise and loving father up against a force he cannot fight. "Circumstance," which won the Audience Award at the 2011 Sundance Film Festival, brings us a new filmmaking talent to watch in Keshavarz who has given her three main protagonists breakout roles.

Multi-hyphenate newcomer Maryam Keshavarz (writer-producer-director) brings a very different love story to the screen. Set in turbulent, fundamentalist-controlled Tehran – Iran is not known for its tolerance towards women – Shireen and Atafeh must use their wiles to get into the secret clubs and parties where they can shed their headdresses and, literally, let their hand down. Like teens everywhere, they are curious about the things their Muslim culture forbids and seek out these forbidden fruits. Everything is going well for these girls that want to have fun – until two things happen: the Morality Police are cracking down on the speakeasies where the Tehran youth go to escape the strict Muslim rules. Then, Shireen’s recovering addict Mehran (Rezo Sixo Safai) returns to the family home. There, he embraces Allah and becomes a devout Muslim worshipper. Now, the girls are being watched outside the home and in, by Mehran. Helmer Keshavarz, with “Circumstance,” braves new worlds with her delicate handling, with deference to the culture, of teenage love, youthful rebellion and the questioning of totalitarian authority. The story, the acting, techs and directing belie that this is a newbie movie. Besides Keshavarz’s debut, Nikohl Boosheri and Sarah Kazemy make a solid splash their first time out of the gate and they give truly sympathetic and convincing performances. The rest of the cast are mostly newcomers with more seasoned actors, like Rezo Sixo Safai, help flesh out the supporting characters. Behind the camera work is also a mix of vets and newcomers and make Tehran a vibrant character in the film. Themes of sexual liberation, religious oppression, rebellion to authority and free- thinking permeate the fabric of the film and “Circumstance” is for any mature teenager. Unfortunately, movies about fundamentalist Iran are a hard sell for any market, but this is a gem of a coming of age flick.