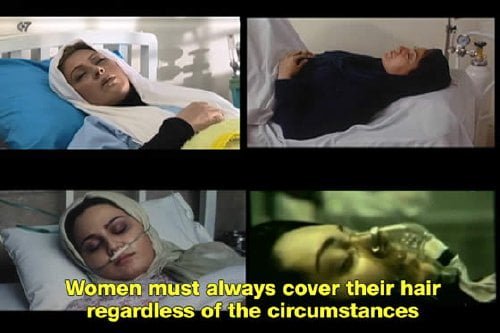 Iranian cinema had a heyday back around 2000 with such acclaimed films as “A Time for Drunken Horses” and “The Circle.” But, the fundamentalism of the Iran government has imposed increasingly restrictive censorship on the filmmakers in that country. Documentary maker Jamsheed Akmani interviews 12 prominent Iranian directors and actors as they discuss the difficulties in making movies in their country since the new millennium renaissance in “A Cinema of Discontent.”

Director and film professor Jamsheed Akrami interviews a dozen Iranian filmmakers and provides a multitude of film clips to support their discussions about the Iranian government's film censorship in "A Cinema of Discontent." Akrami divides his film into sections using crude cut-out animations, but while his film can be enlightening and is certainly entertaining, he gives the majority of his running time over to the first two - illustrating the ludicrous demands of never showing a woman on film without her hijab or physical contact between members of the opposite sex, no matter their relationship. A third is merely a rehash, illustrating how filmmakers get around the first two restraints. If one is looking for political censorship of criticism of the regime, as the documentary's title would indicate, it's treated as almost an afterthought. The film begins with lots of word graphics as each of the twelve subjects makes statements about filmmaking in Iran. (It is heartening that the dozen includes 2 women, a healthy percentage considering neither is well known to Western audiences, like Samira Makhmalbaf.) Jafar Panahi, currently banned from making movies for twenty years, offers the idea that 'cinema is not a means to an end,' while Mojtaba Raee puzzles over why only protest films seem to be shown in the West (one of the pleasures of Akrami's film is exposure to Iran's more commercial films). The first section on the hijab is often funny. Even though Iranian woman are not required to wear the head scarf within their own homes, they cannot be depicted on film without one. Filmmakers seem to poke fun at the notion as we see a woman using a hair dryer beneath her scarf. Others use the restriction for eroticism, a woman disappearing into shadow as she drops her scarf onto the floor. In the second, we see that even a parent and child of opposite sex cannot touch or embrace. Some filmmakers get around this awkwardly, characters clutching others by their garments, but directors such as "A Separation's" Asghar Farhadi argued that he could not edit a long, continuous take in which a woman grappled with a man in "About Elly" and won. Astonishingly, we learn that it is OK to depict a slap to the face from one gender to the other, shades of the MPAA's rulings on sex vs. violence. And who knew that the Iranians made serial killer horror movies? Just imagine the contortions that director had to go through with a male protagonist and female victim(s). One is reminded that creativity seems to flourish when bound by limitations - if Iranians must find ways to get around women's head scarves, touching the opposite sex and singing and dancing (a rule which Bhaman Ghobadi flouted in "Half Moon"), American filmmakers frequently point out that limited budgets can be more of an artistic advantage than hindrance. The greater danger in Iran, many point out, is in self-censorship. Again we have parallels in the West - think about Hollywood Studios eradicating cigarette smoking, even in period films, for example. While interview subjects state that they may never make the films they truly want to while in Iran, one wishes Akrami had delved more fully into more serious breeches of Iranian censorship, like the reasons why Panahi was arrested. Still, "A Cinema of Discontent" opens up Iranian cinema beyond the art house and even though these filmmakers face somewhat different challenges, we're reminded that filmmaking is a global conversation.

Islamic law in Iran has many restrictions for its filmmakers – a man and a woman cannot touch; women must wear veils to cover their hair, even in private; kissing is forbidden; woman cannot sing or dance in public. These laws, though, force its filmmakers to come up with creative ways get around these restrictions – much like American filmmakers do to get past the MPAA, only with a much greater degree of censorship. The filmmakers interviewed discuss their double lives – one private, the other public – while trying to ply their craft. They talk about the lengths they go to get around government censorship. One trick is to put material in their films that will guarantee that it will be censored. This allows the makers to slip other tabooed stuff into the film, giving the impression of physical contact between a ma and a woman without actually showing the act. This and other techniques in overcoming censorship are discussed by both internationally acclaimed directors, such as Jafar Panahi, Asghar Farhadi and Bahman Ghobadi and those unfamiliar to us in the West. They are all working under the same burdens and all, still, go about making their movies in their home country. I admire their resolve and dedication.