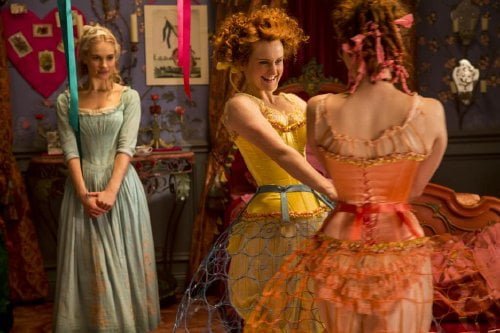 After her beloved mother's (Hayley Atwell, "Captain America: The Winter Soldier") death, Ella still lived a happy life with her father (Ben Chaplin, "The Truth About Cats & Dogs"). Years later he took a new wife, the widowed Lady Tremaine (Cate Blanchett, "The Hobbit's" Galadriel), who set about reestablishing the household with her daughters Anastasia (Holliday Grainger, 2011's "Jane Eyre") and Drizella (Sophie McShera, 'Downton Abbey's' Daisy). When tragedy strikes again, Ella (Lily James, 'Downton Abbey''s Rose) finds herself in the role of a servant, sleeping by fireside embers to keep warm, a habit that causes Drizella to rename her "Cinderella."

Disney's current trend of remaking their classic animations as live action movies once again finds them with sympathy for the devil, but unlike last year's revisionist rape allegory "Maleficent," Chris Weitz's ("The Golden Compass") adaptation is far truer to its source and is all the better for it. While the heroine's disinclination to stand up for herself doesn't relay the most feminist agenda, the maternal advice she lives by, to 'have courage and be kind,' is a message no one could fault. Director Kenneth Branagh ("Hamlet," "Thor") once again surprises venturing into an unlikely genre, conjuring some real movie magic in climactic scenes. Screenwriter Weitz's most inspired idea was to have Ella meet Prince Charming (Richard Madden, HBO's 'Game of Thrones') earlier in the story, turning the ball into an occasion where each hopes to find the other. The Prince allows Ella to believe he is simply Kit, a young palace apprentice out on a hunt which she persuades him has no value. And of course he is an apprentice of sorts, his father the King (Derek Jacobi, "The King's Speech") grooming his son for the throne, one which he insists should be shared as a political alliance with a princess bride. The court knows, however that the Prince's head has been turned by a young girl he met in the forest and the King goes along with his son's desire to turn the ball into an occasion for every maiden in the land in addition to visiting royalty. Of course Lady Tremaine has no intention of allowing Cinderella to attend the ball and when her stepdaughter fashions her own dress from one of her mother's old ones, she destroys it. She also manages to get the ear of the Grand Duke (Stellan Skarsgård, "Thor"), plotting to assure herself and her daughters a place in the court. Weitz does falter, failing to explain just why Ella's father marries Lady Tremaine in the first place. He explains that this is his last chance at happiness, yet is never seen spending time with her. In fact, it is his indifference and loyalty to his deceased wife that sparks her bitterness and jealousy (and while it doesn't excuse her behavior towards his daughter, Blanchett's wounded look when she overhears him talking about his dead wife is moving). While it's fun to watch Blanchett swan about in fabulous clothes with her malicious looking cat Lucifer on a braided silk cord, "Cinderella" is all about that ball and its aftermath and Branagh shifts into high gear when it counts. The Fairy Godmother's (Helena Bonham Carter, "Alice in Wonderland") appearance all rests on Cinderella's kindness, an old beggar woman transforming after being given a bowl of milk. After finding the appropriate veg, Cinderella's goose, the mice she cares for and a couple of handy lizards are all transformed into coach, coachman, horses and footmen. Costume designer Sandy Powell ("Far from Heaven," "The Wolf of Wall Street") deserves special commendation for the robin's egg blue ball gown made with movement in mind and glass slippers (made of Swarovski crystal) one wishes could actually be worn. Powell does great work throughout, costuming the two stepsisters like cartoony, color coordinated twins. Another Scorsese regular, production designer Dante Ferretti, provides a fantastical environment. James is a wonderful Cinderella, her kindness translating into the liberal minded wisdom which catches the Prince's attention. Also great fun is Bonham Carter, giving her Godmother a bit of bonkers derangement. Nonso Anozie ("The Grey," HBO's 'Game of Thrones') is the Prince's supportive counterpart, a Captain working for a happy ending. Watch for "The Trip's" Rob Brydon in a small, amusing turn as the Prince's portrait painter. Grade: B In keeping with Disney princess mode, the movie is preceded by a "Frozen" spinoff short, "Frozen Fever," which is mostly an excuse to trot out a not particularly memorable song and one new amusing visual gag as Anna's older sister Elsa continues her emotional thaw. It's a pleasurable enough 8 minutes, but nothing memorable.