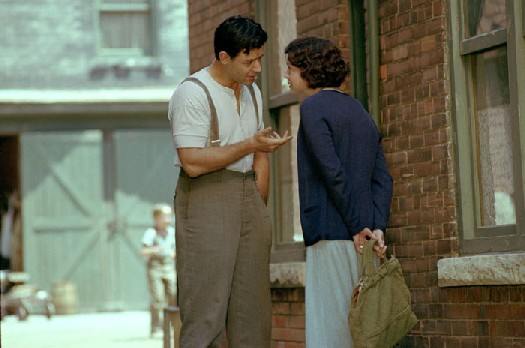 Jim Braddock (Russell Crowe) was an up-and-coming contender for the heavyweight boxing title when bad luck and The Great Depression thrust him and millions of others into a state of utter destitution. Then, a one shot chance to fight again is presented to the washed up pug, sparking a new, remarkable career and bringing hope to a nation desperately in need of it as the “Cinderella Man.”

Director Ron Howard continues to show that he is one of America’s best filmmakers working today. Making a detailed Depression-era period piece on the heals of his Oscar-winning period piece, “A Beautiful Mind” and the late-1800’s western, “The Missing,” is, at the very least, a daunting task. Howard is equal to it though and, with Russell Crowe once again in the lead, has crafted a work worthy as one of his best. The still boyish 50-year old shows his ability to tell a good story and elicit effective performances from his entire cast. Russell Crowe gives one of his best performances, ever, as everyman Jim Braddock, whose quite literally rags-to-riches story proved to be an inspiration and hope to a country that was trying to cope with nation-wide poverty and unemployment rate over 25%. When Braddock took his one shot chance and won, it didn’t just give him a little money to help save his family, it gave him a dignity long thought lost. The one-time deal led to more fights until, under the managing of Joe Gould (Paul Giamatti), Jim gets a shot at the title held by Max Baer (Craig Bierko), the champion who has killed two men in the ring. It’s not a David versus Goliath match but one that pits the ruthless ambition of Baer against something much deeper and stronger in the heart of the Cinderella Man. Maybe it was fate, maybe it was chance, but Jim Braddock proved that you couldn’t keep a good man down. Crowe commands the screen as the kind and gentle, when out of the ring, Braddock. Renee Zellwegger, as Jim’s loyal, stalwart wife, Mae, takes on what is generally a two-dimensional role and fleshes it out into a living, breathing person. The actress proves, again, her effectiveness as a character actor. The rest of the cast, while not remarkable, is well populated with veteran thespians. Paul Giamatti proves himself very capable as Jim’s friend and manager. Craig Bierko gives a good performance as the champ whose pleasant façade masks the heart of a man who will do anything to win, even kill. Bruce McGill gives a good small perf as the fight promoter who takes a chance on Braddock. The story and screenplay by Cliff Hollingsworth is a finely crafted tale of a man rising above incredibly daunting obstacles in order to take care for his wife and kids. (In one sweet scene, Jim tells his hungry young daughter about his dream of a thick juice steak then insists she eat his meager supper of fried bologna because he is too full to eat it.) Braddock and all are well-defined characters in this true-life tale and its richness of positive messages makes “The Cinderella Man” a crowd-pleaser of quality. This quality extends to all aspects of production and attention to period detail. The fight scenes, too, have the look and feel of the time when two fighters got into the ring and bruised it out. The graceful choreography we usually see in modern boxing films is replaced with the hard-hitting reality of the ring in the 1930’s. The summer film release schedule is upon us and the multiplex screens will soon be filled with the likes of such Hollywood fare as ”Batman Begins,” “Mr. And Mrs. Smith” and other action and high tech entertainment. Fortunately, for the more mature audience that would rather a good story than copious F/X, “Cinderella Man” will fill that particular bill.