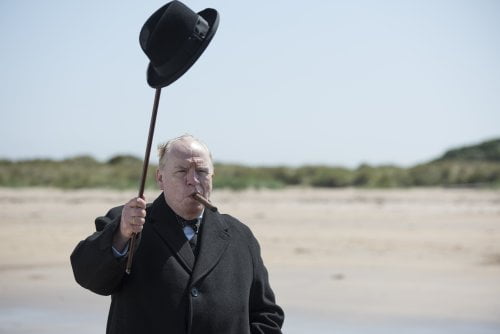 It is just 96 hours before the all-out Allied invasion of the Nazi-held Europe at Normandy. The man who announced “we shall never surrender” over four years before is a shell of his former self. Depressed, exhausted and haunted with guilt over his disastrous attack on Gallipoli in 1915 with hundreds of thousands dead, he fears the invasion will have the same horrific results in “Churchill.”

Taking the currently fashionable route of the narrowly focused biopic, Jonathan Teplitzky ("The Railway Man") presents Prime Minister Winston Churchill (Brian Cox) in crisis in the days leading up to the D-Day invasion. Screenwriter Alex von Tunzelmann has compressed the timeline for dramatic effect and created a composite secretary, Helen (Ella Purnell, "Miss Peregrine’s Home for Peculiar Children"), as both his victim and his wake-up call. The film is handsomely shot, David Higgs's ("RocknRolla") gliding camera hovering above and beneath Churchill, at once lionizing and bringing him low. This is essentially an opportunity for Cox to sink his jowls into a historical giant at a time when, at least as Tunzelmann interprets it, his past mistakes haunt him (she lets him off easy on Gallipoli nonetheless). Challenging Allied Forces leader General Dwight D. Eisenhower ('Mad Men's' John Slattery) in front of King George VI (James Purefoy, "High-Rise") doesn't endear him to the men, including Montgomery (Julian Wadham, "The Iron Lady"), attempting to pull off a risky surprise. As Churchill rails against the potential loss of human life, he falls into depression and the bottle, leaving wife Clementine Churchill (Miranda Richardson) to bring him out of his funk and back up to the task with the help of Jan Smuts (Richard Durden, BBCA's 'Jonathan Strange & Mr Norrell'), the South African statesman who became a field marshall serving in Churchill's Imperial War Cabinet (the film muddies his historical role, seemingly little more than Churchill's driver here). Casting Churchill as an impotent meddler during a crucial time in history is intriguing to a point, but the film devolves into sentiment in its last act. "Churchill" seems at odds with itself, Cox's performance that of an old man railing against the dying of the light, yet the film telling us he is considered by many to the be the greatest Briton who ever lived. Grade:

There have been countless (at least, I did not count them all) TV episodes and films that mined the life and times of Winston Churchill. This year, we have two about the man: “Darkest Hours,” out later this year that stars Gary Oldman as Churchill during the Nazi Blitz. With “Churchill,” starring Brian Cox in the title role, the film takes place just days before the invasion. The Prime Minister of England has major misgivings over the huge assault on France just days away. He demands a meeting with the Allied Supreme commander, General Dwight Eisenhower (John Slattery), Field Marshal Bernard Montgomery (Julian Wadham) and Field Marshal Alan Brooke (Danny Webb) to change the invasion plans completely – just three days before Ike pulls the trigger starting the invasion. Churchill does not get his way here and when he declares to Eisenhower that Churchill and King George VI will take part in the landing. Ike, of course, declines the offer. Brian Cox does a fine job in his character study of the man who was once decisive in his decisions and helped to save his nation from the Nazis. But, the years since the Blitz have taken their toll on Churchill in harsh, leaving the once confident statesman and leader feeling that his place in history is in jeopardy. Cox personifies the troubled man and garners sympathy as he tries to stay in the public limelight, though that light has moved on to other luminaries in the war. The supporting cast is unexceptional with John Slattery miscast, in both looks and conduct of character, as Ike – except for the always-burning cigarette in his hand. Mannerisms, though, do not make the character three dimensioned. Only Miranda Richardson, as Churchill’s loyal wife, muse and confessor, Clementine, gets to define her character as a real person as she tries to keep her husband on path, even slapping his face to break him out of his all-consuming funk. The history buffs may be disappointed in the depiction of the icon as a mere mortal with all the foibles of an ordinary/extraordinary man. “Churchill” does show, in Cox’s performance, the bluster, insecurity, strengths and weakness that weighed upon the great man after all the years of war and leadership.