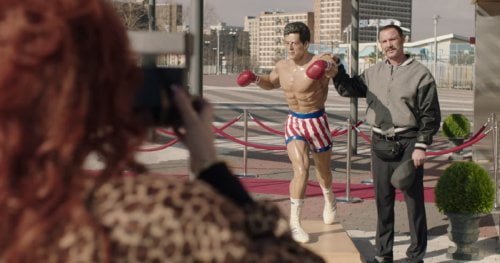 Chuck Wepner (Liev Schreiber) got the chance to live a professional boxer’s dream. He was chosen as the fighter to go against “The Greatest,” Muhammad Ali, in the 1975 Heavyweight World Champion title bout. The boxer’s rise, to that moment, and his subsequent fall are shown in the life of “Chuck.”

In the 1970's, Chuck Wepner (Liev Schreiber) was the pride of Bayonne, New Jersey, the heavyweight champion of his state, known as the Bayonne Bleeder for his ability to take a licking and come back for more. It was a modest career, until promoter Don King decided to follow up the historic Zaire Foreman/Ali fight with a racial angle, giving Wepner the opportunity to contend for a world title. Wepner confided to his wife Phyliss (a terrific Elisabeth Moss) that he was determined to 'go the distance' and he did, starting strong, then hanging on for 15 rounds. A little known actor named Sylvester Stallone (Morgan Spector, "The Drop") wrote a screenplay based on Wepner and "Rocky" went on to went on to win the Best Picture Oscar, giving Wepner a new spotlight as the 'real Rocky Balboa,' but his second bout with fame didn't end as well. French Canadian director Philippe Falardeau ("Monsieur Lazhar," "The Good Lie") brings a gritty, 70's video quality to the film, written by Jeff Feuerzeig ("Author: The JT Leroy Story"), Jerry Stahl ("Bad Boys II"), Michael Cristofer (HBO's 'Gia') and star Schreiber ("Everything Is Illuminated"). If things really happen as told here, it is uncanny how much of Wepner's life Stallone intuited (we see Chuck and Phyliss give each other an astonished look while watching the movie when that 'going the distance' line comes up and Phyllis, like Adrian, couldn't watch the actual fight). But "Chuck" isn't so much a boxing movie as a cautionary tale about the allure of fame. Schreiber gives Wepner an appealing blue collar quality, a bear of a man with an open, easy going nature. He thrives on recognition about town, especially with the ladies, but truly loves his wife (like Ali Wepner is prone to poetry, albeit not as memorable, writing love notes to his wife and one interrupted by Ali at the pre-fight press conference). He surprises Ali (Pooch Hall, Showtime's 'Ray Donovan'), who's expecting a pushover, at the beginning of their fight, even knocking the man to the ground, but once Ali's angry, Wepner doesn't stand a chance. He is a home town hero, nonetheless, for his magnificent feat, but as time goes on the attention dwindles. "Rocky" comes along at just the right time. Wepner revels in coke-fueled nights at clubs where his entrances are announced, but when someone asks how much money he's made from "Rocky," he admits to only $70K, not having been savvy enough to go for a backend deal. That's a face-saving lie that gets the wheels turning and Chuck engineers an opportunity to meet Stallone at a private gathering (the star graciously agrees to meet him, embracing him with enthusiasm). Sly thinks there's a role for him in the sequel. His marriage destroyed by boozing and womanizing, Chuck sets off with his buddy (Jim Gaffigan) and a couple of bimbos, partying all the way to an audition he's late for. Stallone tries his best, but it is clear to everyone this man is too unreliable and untalented to take a chance on. Novelty fights with Andre the Giant and a grizzly bear loom. The film lags a bit in its final third which finds Chuck finally making inroads with the bartender, Linda (Naomi Watts), who's been too smart to fall for his schtick. Chuck still has farther to tumble, but the lovable schmuck ends up finding happiness once he finds humility. The film also stars Ron Perlman as Chuck's manager Al Braverman (Ron Perlman) and Michael Rappaport as Chuck's estranged brother. Grade:

In 1974, the world watched Mohammed Ali and George Foreman tangle in the famous bout, tagged the “Rumble in the Jungle,” which Ali won by a KO. Capitalizing on that victory. uber-showman Don King announced the champ’s next fight with a great white hope, Chuck Wepner, which the New Jersey state heavyweight champion jumped at. Wepner went to the beginning of the 15th round before the fight was called. Wepner, during that fight, controversially knocked Ali off of his feet – the only boxer ever to do so. But, the famous 1975 prize fight is only a chapter in Wepner’s life. Director Philippe Falardeau (Oscar nominated for “Monsieur Lazhar (2011)”) delves into the boxers life before and after his most famous fight. We see how he got to that crossroad in his life and, more significantly, his life after. Chuck’s fight with Ali inspired actor Sylvester Stallone to base his story, “Rocky,” on Wepner and Falardeau uses that to dominate the film’s second half. In true form to the time – the filmmakers use the grainy look of 70s films like “Taxi Driver” and a voice-over narration by Schreiber as Wepner, much like De Niro as Travis Bickle – “Chuck” feels like it was made during the times it tells. Liev Schreiber does a solid job portraying the “Bayonne Bleeder” – a moniker given to the boxer because he could “take a punch.” You want to shake him hard as he philanders on his loving, put-upon wife Phyliss (Elizabeth Moss) and you believe him (almost) when he tells her he is sorry. Chuck is a true product of his time when, when you make it, you flaunt it. Chuck finds out, though, that does not always end well. I am a sucker for boxing movies and “Chuck” is a decent biography of a man we did not, really, know. The filmmakers address this unknown and, with Schreiber, tell an honest story of the rise and fall of an athlete.