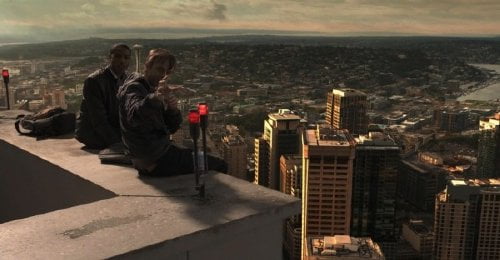 Andrew (Dane DeHaan), Matt (Alex Russell) and Steve (Michael B. Jordan) are three normal high school friends. That is, until they make a discovery that unleashes hereto unknown psychic powers. With power, though, comes responsibility and they plan to do only good with their new-found abilities. But, the dark side of their telekinetic potential comes to the surface and we find out what happens in Andrew’s video “Chronicle.”

When we first see Andrew Detmer (Dane DeHaan, HBO's 'In Treatment,' looking like a young Bowie crossed with DiCaprio), it's his reflected image on the mirror on the back of his locked bedroom door. He has just begun his new enterprise to videotape his every waking moment and his first subject happens to be his drunken dad (Michael Kelly, HBO's 'The Sopranos') trying to get in to ladle out some routine abuse. The teen's bullied at school too, except for his cousin Matt (Alex Russell), but the two become three when Matt and popular Steve Montgomery (Michael B. Jordan, HBO's 'The Wire,' TV's 'Parenthood') find a deep hole in the ground where a crystal lifeform imbues them with telekinetic powers. What begins as fun takes a wrong turn as the stresses on Andrew mount and he captures the whole story in his "Chronicle." This little film which seemingly came out of nowhere seems just like what we don't need - another found footage film - and even though it is often derivative (think "Carrie" crossed with "Cloverfield"), director Josh Trank (TV's 'The Kill Point'), who also concocted the story with screenwriter Max Landis (TV's 'Masters of Horror' and 'Fear Itself'), has a fresh voice, a sure hand with special effects and appealing leads. The trio formed is an interesting one - the bullied boy who's losing his last line of defense (his mom lies dying in her room), the middle-of-the-roader with a penchant for philosophy and the charismatic and self-confident guy running for class president. It's a breakout role for DeHaan (and I'm not the only one who noticed the Bowie resemblance - the filmmakers play it up with "Ziggy Stardust" on the soundtrack and third act eye damage - and another rung up for Montgomery, both HBO alums. At first the boys have private fun manipulating a baseball, then graduating to confusing shoppers by moving parked cars. Steve's the first to discover his mind over matter gives him the ability to fly and when the others catch up, they're soon skydiving through clouds in impressively executed visuals. But Andrew doesn't always maintain control, especially after Steve's gambit to help him score chicks starts spectacularly then nose dives, and Matt tries to lay down rules - to not use their powers on living things or to use them in anger. Problem is, Andrew's not exactly in a rational frame of mind. A problem every found footage film must overcome is how to realistically include the camera and Trank and his team come up with some real good ideas - including using their anti-hero's power to get some interesting angles and movement - but there are a couple scenes where the filmmakers simply stretch too far. We can accept that the ex girlfriend Matt's trying to win back (Ashley Hinshaw) is taping school events for her blog but not that she'd perfectly frame her front door before answering it and a voiceover explaining the need for a camera at the foot of a hospital bed drew laughter from a preview audience. On the plus side, though, Matthew Jensen (HBO's 'True Blood,' 'Game of Thrones') eschews the usual chaotic visuals of amateur photography used in these films, at least until "Paranormal Activity's" Peli founds his tripod, believably. The film's climatic downtown Seattle smackdown may be derivative, but it's still well done. "Chronicle" may be everything those looking forward to the "Spider-Man" reboot really need.