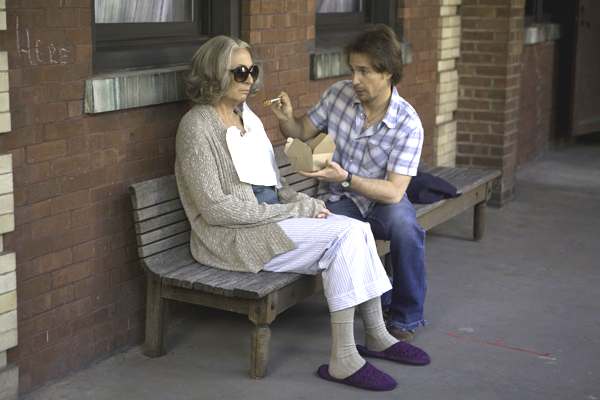 Victor Mancini (Sam Rockwell) is a practicing sex addict, works as a Colonial recreator, takes care of his institution bound mother, Ida (Angelica Huston), and runs a lucrative con operation. He dines in upscale restaurants, forces a lump of food down his throat and begins a theatrical search for help as the other patrons watch him "Choke."

Writer/director Clark Gregg has adapted the Chuck "Fight Club" Palahniuk novel and one wonders - why? "Choke" is a bizarre amalgamation of sex addiction, American colonial recreators, bizarre childhoods, scam restaurant chokings, and mental instability that Palahniuk tries to make revelant within the context of a son's relationship with his mother. Oh, and then there's the cloning of Jesus from the 'sacred foreskin.' None of it amounts to anything and there's not even a particularly enjoyable performance. Star Sam Rockwell's (""The Assassination of Jesse James by the Coward Robert Ford," "Snow Angels") Victor Mancini isn't a character worth caring about. Wes Anderson has made Huston the go-to actress for neurotic mom roles and she fills the bill once again. Kelly Macdonald ("Trainspotting"), so glorious in "No Country for Old Men," just frets her way through this one. Only Brad William Henke ("Me and You and Everyone We Know") as Victor's best friend Denny adds any life to the proceedings. Look away and you may miss Joel Grey ("Cabaret") in a role of no consequence. Since "Fight Club," Palahniuk hasn't written a single book I'd have any interest in reading and this adaption is a waste of talent and celluloid.

Victor divides his days between fulfilling his addiction, acting as a farm hand at a Colonial Williamsburg-style theme park, visiting his alseimer-addled mom and, to keep extra money coming, practicing his choking con. His Heimlich maneuver saviors, it seems, feel obligated to keep in touch with the poor victim and regularly send him money. He uses the dough to pay for the private treatment for his mother even though she does not recognize him. During his visits Victor becomes smitten with Dr. Paige Marshall (Kelly Macdonald), Ida's doctor, and his non-sexual interest (could it be genuine friendship?) in the pretty woman sparks a change in the man. Director-screenwriter Clark Gregg adapts the Chuck Palahnuik novel and comes up with a dramedy that is short on both drama and comedy. One problem is the character, Victor. He is such an unlikable, sleazy person that his one notable act of kindness, paying for his mother's special care, seems to be for ulterior motives. Rockwell does the role well enough but the actor is hampered by the character. Angelica Huston seems too young to be suffering the old age disease ­ though this is brought up once in the script, to cover the bases ­ but is used well in flashback to much younger Victor and Ida. Kelly Macdonald is most enjoyable as the perky young physician who is the catalyst for Victor's sexual metamorphosis. "Choke" succeeds in grossing you out with the title con but these incidents are simply not funny. The other aspects of Victor's life are equally not enthralling. Techs are routine.