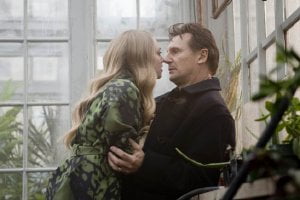 Long married gynecologist Catherine (Julianne Moore) suspects her music professor husband David (Liam Neeson) is cheating. To put him to the test, Catherine hires an escort to seduce him, but she gets more than she bargained for when reports come back from "Chloe."

I couldn't understand why director Atom Egoyan ("Adoration") wanted to remake Anne Fontaine's titillating but ultimately meaningless 2003 French film "Natalie." Would he make it more trenchant? Would he filter it through his world view? Well, sure, Catherine and David's son is dumped via webcam and cell phone texting proves the key to disasters, but all Egoyan's done with "Chloe" is take a subpar film and turn it into a lurid joke. After "Where the Truth Lies" and now this, I think Egoyan's done walked off the map. As with the original, "Chloe" is populated with good looking, talented stars - Liam Neeson in the Gérard Depardieu role, Julianne Moore for Fanny Ardent and "Big Love's Amanda Seyfried as Chloe to Emmanuelle Béart's Natalie. Seyfried fares worst here with a shallow softcore thriller characterization, although Moore's role choices of late make me wonder if she's aspiring to the icy intellectual weirdness of many Isabelle Huppert moms (they both happen to be a bit of a rarity as prominent ginger actresses). Moore's conundrum is heartfelt - the script provides reason to think, after all, that hubby may be straying - and she makes us empathize with Caroline, but after a while, the upcoming 'twist' becomes so obvious her actions become desperately silly. Neeson is amiable, although it is difficult to think that this is the movie he had to return to finish after his wife's tragic skiing accident. His David shows too much warmth and concern to really believe what Caroline suspects, however. The film follows the original pretty closely up until a point. Chloe 'runs into' David, then returns to report the details to Catherine, who seems to get pretty turned on by them. Just when Catherine goes to pull the plug, though, Chloe starts claiming she's being contacted directly by David and so begins to take control of their business relationship, making it person (ahem). Meanwhile, in a difference from the original, Catherine and David have a teenaged son, Michael (Max Thieriot, "Kit Kittredge: An American Girl"), who we know is vulnerable because he's just experienced sex with Anna (Nina Dobrev, TV's "The Vampire Diaries") only to get dumped, and because we're told he is in therapy (although never why). Chloe eventually steps up her relationship with Catherine, acting on the same impulse which led to them meeting in the first place, but when Catherine tries to end their relationship, Chloe sets her sights on Michael to remain close. The climax of this film is a great big slice of cheese which is ironically capped with a shot that could have been pulled from "Big Love's" new opening credit sequence. A coda is even more absurd, a bit of Hitchcockian hilarity. I must say that costume for the two leading ladies is very captivating (with the exception of the peach silk and black lace hooker dress which Chloe meets Caroline in). Toronto is presented as picture perfect as are the large modern office and home that Caroline splits her time between. Mychael Danna's score is also moodily pretty and Egoyan has made indie band Raised by Swans Chloe's theme music. But while Egoyan's given his titular character her own band and interesting clothes, he's given Seyfried absolutely nothing to build a character from. She's a blank psycho and Egoyan's film is late night Cinemax fare given a high gloss.