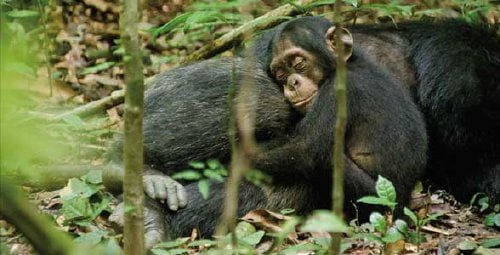 Oscar is the youngest member of alpha-male Freddie’s chimpanzee clan and is cared for by his loving mother, Isha. A rival group, led by Scar, wants to take over Freddie’s territory and its plentiful food supply and, during the melee, Isha is lost to little Oscar. The three-year old must fend for himself but the odds are against this little “Chimpanzee.”

In an African rain forest, Oscar is born and raised by an ever vigilant mother, but before he is old enough to be on his own, she's taken by a leopard. Oscar is shunned by other members of his tribe, until he is adopted by its least likely member, Freddy, the alpha male "Chimpanzee." Alastair Fothergill & Mark Linfield ("Earth") presumably didn't invent their "Bambi" like nature story, but their narration is so Disney-referential, they name Freddy's enemy Scar. The film features some stunning nature photography (closing credits humorously detail some of the extreme hardships the crew went through to nab it), but even at a scant 78 minute running time, it feels padded. This one actually feels a little less anthropomorphized than usual, given that the filmmakers have documented real chimp behavior - using rocks to open nuts and strategy to hunt monkeys (!) - but the narration includes unnecessary jokey head balloon comments and strained attempts at drama. Tim Allen's idea of upping the intensity level is to talk louder. Scenes of chimps 'dancing' to jazzy number "That Man" are a bit creepy. The BBC's 'Meerkat Manor' did all of this much better. Like "The Hunger Games," the filmmakers shield children from any upsetting visuals which means that the highly touted 'wars' between Freddy's 'team' and Scar's amount to a bunch of chimps swinging around trees. The Capuchin monkey hunt is bloodless - we only see a strand of flesh as a chimp eats. The loss of Isha, Oscar's mother is an artsy montage jungle and leopard scored with a roar and a chimp screech. Yet Oscar is fun to watch before the filmmakers begin to get repetitive and they were truly blessed by the unique foster parenting situation they stumbled upon. Their ability to get close enough to capture this without disrupting the animals is impressive. Time lapse photography is beautiful, but for all the manufactured chimp thoughts delivered, we don't get an explanation of what we're seeing - what is that creeping yellow substance that overpowers everything in its path? These sequences are like extra long cutaways without any relation to the action that surrounds them. "Chimpanzee" is an often admirable effort, but it would have been better suited to a half hour television show.

DisneyNature produces an excellent looking “living with the chimps” tale that will appeal to little kids and their parents only. Well, maybe not the parents, but definitely for the little kids. The “story” is narrated by Tim Allen (a poor choice) and from the very start the filmmakers (Alastair Fothergill and Mark Linfield) anthropomorphize the chimpanzee hijinks, much like Animal Planet’s “Meerkat Manor” but not as well done This makes “Chimpanzee” a sure bet for the little guys but not for anyone over the age of eight. “Chimpanzee” runs a mere 78 minutes but by the half way mark I had enough. The photography by Martyn Colbeck is extraordinary and the up close and personal interaction with Oscar, Freddie and the rest of the group is nothing short of remarkable. I would have preferred a straightforward nature documentary examining the clan life of chimpanzees instead of an animal story given human trappings with the narrator literally putting words in their mouths.