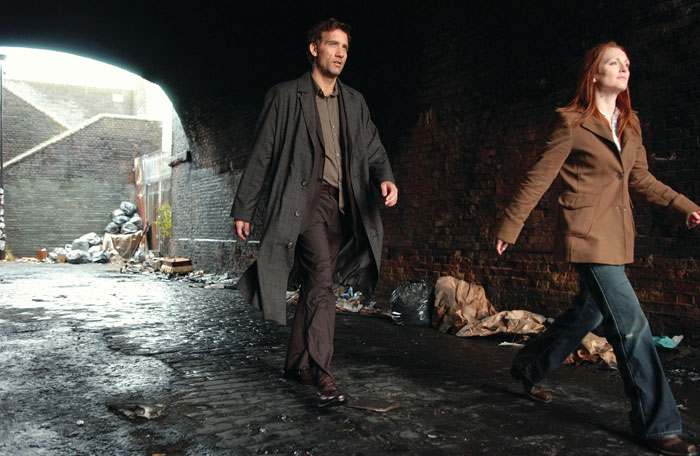 It is the year 2027 and the world is in mourning over the death of earth’s youngest person, an 18-year old! Mankind has lost the ability to produce offspring and it has been nearly two decades since the last birth. In despair, the dwindling number of survivors has given up all hope and the once thriving civilization of man has descended into chaos. But, when one young woman inexplicably turns up pregnant, the world gets one last chance for survival in “Children of Men.”

This is a great looking sci-fier that tries very hard to balance doom and hope in a world that has fallen into a morass because there is no chance for a future for mankind. When we learn that Kee (Claire-Hope Ashitey) is pregnant, she is not the ray of hope for man. Instead, she is a pawn in a complex struggle between reason and insanity. Clive Owen is decent as the cynical guardian, Theodore, assigned to take Kee to safety. The story is about their adventures and nightmares in achieving that goal. The best thing about “Children of Men” is the outstanding art direction and production design. There is a genuine feel, in the film’s look, of a world on the brink of total collapse. It is a stark, future world that has devolved rapidly. Helmer Alfonso Cuaron combines good techs, an interesting story and characters and achieves a dark look into the heart of man. Cuaron assembles a good ensemble cast, to support Theodore and Kee, with the participation of such notable character actors as Julianne Moore, Chiwetel Ejiofor, Danny Huston, Peter Mullan and Charlie Hunnam. Clive Owen does not give his best performance, especially when compared to his terrific perf in the recent “Inside Man.” While I love a good sci-fi yarn, I found that Children of Men” failed to resonate with me. The look of the film stayed in my mind but the story was soon forgotten. It is a technically well crafted film but one that, to me, lacks heart.