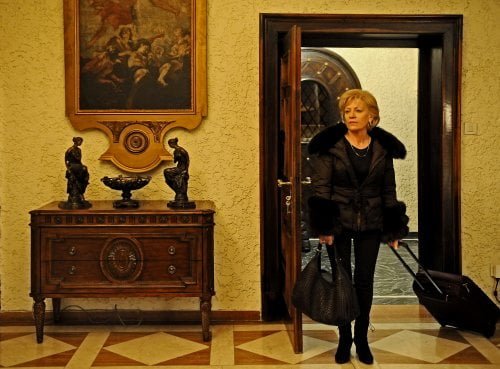 Well to do Bucharest architect Cornelia Keneres (Luminita Gheorghiu, "The Death of Mr. Lazarescu") wants nothing more than to control the life of her thirtysomething son Barbu (Bogdan Dumitrache, "The Death of Mr. Lazarescu"), but he's so sick of her meddling he refuses to even attend her birthday party. When he hits a fourteen year-old boy with his car on the outskirts of town and kills him, his mother's money and connections may be the only way to keep out of jail. Will Barbu maintain his "Child's Pose?"

Cowriter (with "The Death of Mr. Lazarescu's" Razvan Radulescu)/director Calin Peter Netzer's 2013 Berlin Golden Bear winner is a sharp critique of social imbalance and corruption in Romania which questions just which class deserves a future. Despite achieving a level of sympathy for Barbu given his conniving mother, there is little to like about the ill-tempered, cowardly germaphobe, Netzer holding him up as an example of reaping what is sown. We meet a distraught Cornelia telling her sister Olga (Natasa Raab, "Amen"), a medical doctor, about her son's profane and violent treatment of her earlier that day. She makes excuses for him at her party that evening, which is attended by the elite of Bucharest society. We learn the next day that Cornelia hates Carmen (Ilinca Goia), the woman her son lives with, resenting the fact that the she has a child from a prior relationship. She bribes her maid, who also works for Barbu, for information with castoff designer shoes (no matter they won't fit her). Later, Olga arrives to pull her from a concert and gives her the news about Barbu's accident. The two fur-clad women bustle to the small town police station, making preemptive phone calls along the way. Cornelia doesn't acknowledge the victim's family, instead demanding to see her son. When she eventually hears his statement, she instructs him to change it right in front of the Policeman (Mimi Branescu, "Tuesday, After Christmas") and Policewoman (Cerasela Iosifescu, "The Death of Mr. Lazarescu") in charge of the case. Now Cornelia has what she wants as she sets up Barbu in his old room in her apartment. Cornelia's games continue with both the police and her son. Her submissive husband (Florin Zamfirescu) is in the middle, disgusted by his son's behavior while dubbing his wife 'Controlia.' She meets her apparent match in Dinu Laurentiu (Vlad Ivanov, the abortionist of "4 Months, 3 Weeks and 2 Days"), the driver her son was passing at illegal speed at the time of the accident (this and the parallel 'bartering' scene between Gheorghiu and Goia are the most riveting of the film). The stakes are raised again when several point out that it would be advisable to offer to pay for the victim's funeral and Cornelia must grit her teeth to face parents who've lost a child more concretely than she has. The film is shot with handheld camera, often in dim interiors, giving the film an overall dingy look that, while conveying the psychology at play, doesn't match the lifestyle being portrayed. But Netzer and his lead know how to turn the screws, keeping us glued to the drama wondering just how far this woman will go. Gheorghiu, who was the essence of compassion in "Lazarescu," creates one of the most complex monster mothers in cinema and Netzer's ambiguous, climatic finale unseats expectations, leaving us to ponder whether maternal love or matriarchal ego is at play. Gheorghiu's desperation - and guilt - seem all too real, but Netzer's abrupt ending casts his meaning in doubt. Have we just witnessed capitulation or hope for the future? Ironically, neither is pretty.

Luminita Gheorghlu played the sympathetic angel-of-mercy emergency medical tech, Mioara, who drives the aging title character from hospital to hospital to get treatment in “The Death of Mr. Lazarescu. Her character is dedicated to the safe transport of her temporary wards and has sympathy toward her patients, especially Mr. Lazarescu. (Do yourself a favor and see “The Death….”) So, when I sat to watch “Child’s Pose,” I was blown away by the 180 degree shift in her portrayal of a mother, Cornelia, who does not want to let hold of her adult son, Barbu (Bogdan Dumitrache). Cornelia is a well-to-do widow and sees that she is losing her selfish son. He screws up his life big time when he runs down and kills a young child. As Barbu faces prison time, Cornelia, always cunning when it comes to manipulating her son, intercedes, using her political clout to get better treatment for him and seal her hold on her son. Gheorghlu gives a gripping character study of a woman obsessed with keeping Barbu by her side. Her actions garner both loathing and sympathy, not an easy thing to do.