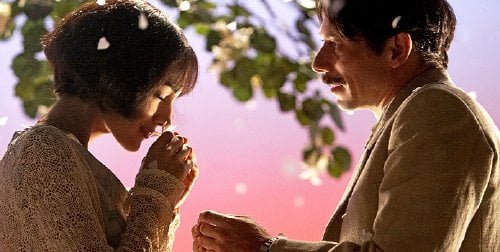 In 1958 the great Iranian violinist Nasser-Ali Khan (Mathieu Amalric, "Kings & Queen," "Quantum of Solace") loses his instrument in an argument with his wife when she smashes it in a fit of pique. After trying and failing to replace it, he decides to await death and takes to his bed. In the next eight days he revisits his life while his repentant wife Faringuisse (Maria de Medeiros, "Pulp Fiction") tries to tempt him with his favorite dish, "Chicken with Plums."

Four years ago, Cowriter/directors Vincent Paronnaud and Marjane Satrapi made their feature film debut with "Persepolis," an animated tale of Satrapi's experiences growing up in Iran before and after the Islamic Revolution of the 1980's. In this second feature of a planned trilogy, the graphic artists (the work was adapted from their graphic novel) don't entirely abandon animation, but use it as one of many techniques to tell the story of Marjane's great uncle, the revolutionary communist of "Persepolis." (The last film of the trilogy will be "The Eleventh Laureate" about another part of the family in the years 1900-1960.) "Chicken with Plums" tells its tale with magical realism using live action, sometimes set within animation, theatrical tableaux and old style movie trickery. It's as much a love letter to cinema as it is to Satrapi's home country. After dealing with an instrument salesman he deems corrupt, Nasser-Ali hears of a Stradivarius for sale and takes his young son Cyrus (Mathis Bour) along on the bus journey from Teheran to Rasht. We watch a real bus travel through beautifully animated landscapes, but the real magic begins when they enter the shop of Houshang (Jamel Debbouze, "Days of Glory"). The merchant has a little bit of everything, including opium, which the father allows his son to sample. But despite the adventure, he returns home without a violin, and takes to his bed where he has a journey of another kind - into his past. As a student, Nasser-Ali learned from a mountaintop master (Didier Flamand, " The Crimson Rivers") in a white, winding city and fell in love with the daughter of a shopkeeper. Irâne (Golshifteh Farahani, "Body of Lies," "About Elly") was the love of his life, but her father (Serge Avedikian) objected to their union and, back at home, Nasser-Ali's mother (Isabella Rossellini, "Blue Velvet") encouraged him to wed the long-besotted Faringuisse. The beautiful Irâne, is, of course, a lovely metaphor for the country she is named after - one yearns for an ideal, but lives with a different reality. Nasser-Ali's story is not told linearly, but the filmmakers never lose us on their magic carpet ride through time. We see his young daughter Lili as an adult (Chiara Mastroianni, "A Christmas Tale"), a hard drinking, smoking teller of fortunes cloaked in shadow. The Angel of Death, Azraël (Edouard Baer, "Molière"), who Nasser is waiting for narrates his story. Amalric, whose bulging eyes are further exaggerated here with the type of farsighted lenses which magnify the eyes behind them, embodies the frustrated artist, years of disappointment evident in his carriage. He leads an international cast (French, Italian, Iranian, Armenian, Moroccan) whom the filmmakers bring together as one big believable family. Portuguese actress Maria de Medeiros keeps the strident Faringuisse sympathetic, portraying the woman from a hopeful schoolgirl to a disillusioned wife and mother (as with Amalric, eyeglasses help define her character, a studious, earthbound version of the ethereal Irâne). Debbouze is a standout as the impish merchant. The film begins and ends with the lovely Farahani in a chance street meeting, the past reaching out to the present. The film suffers slightly in contrast to "Persepolis," its ambition a bit too far reaching, but "Chicken with Plums" is the perfect, Proustian title for this fantastical biography of a man and his life's inspiration.