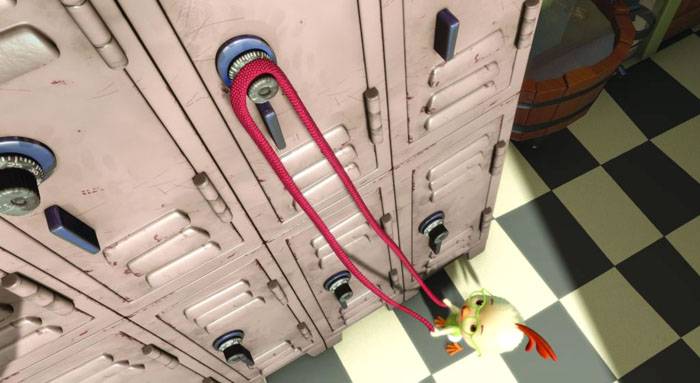 One year after frightening the town of Oakley Oaks with news that the sky was falling, a fledgling rooster is afraid of crying wolf when he's bonked on the head again. But this time the situation escalates, so he rounds up his friends Abby Mallard (Joan Cusack, "Ice Princess"), Runt of the Litter (Steve Zahn, "Sahara") and Fish Out of Water (editor Dan Molina) to save the day without sounding the alarm. A formerly embarrassed dad, Buck Cluck (Garry Marshall, "Orange County"), is made proud by the heroics of his son, "Chicken Little."

Screenwriters Steve Bencich and Ron J. Friedman ("Brother Bear") take the classic tale, change its message and give it a space age twist in Disney's first fully computer-generated animation. "Chicken Little" certainly won't have Pixar running scared, but it's reasonably entertaining once it finds its groove. The little ones are sure to be delighted if they can weather the plodding start. After a series of false starts (the cliched 'Once Upon a Time,' a "Lion King" sunrise, the opening of a book) are rejected, Little (voice of Zach Braff, TV's "Scrubs") tells us that we're just going to go straight to the day things took a turn for the worse. That was when Chicken Little caused havoc in Oakley Oaks screaming that the sky itself was falling. His embarrassed dad, a former high school jock and single parent, tells the outraged townsfolk that his son must have been hit on the head with an acorn. Chicken Little just can't win. His dad doesn't understand him and he's made fun of at school, except for his equally unpopular friends. Abby Mallard, better known as Ugly Duckling, is convinced Little should have a heart-to-heart with his father, but the young lad can't seem to bring himself to do it. Instead he tries to win Buck's favor by joining the baseball team. Coach (director Mark Dindal) keeps him benched all year, but when the championship game comes around, Little surprises everyone. But his moment in the sun is overshadowed all too soon when another piece of the sky falls and is revealed as a panel from an alien space ship. "The Emperor's New Groove" director Mark Dindal works his material in fits and starts as he tries to establish his father/son dynamic, not getting a firm grasp on the film until his alien invasion kicks in. It's intermittently entertaining up until that point, with the various animals' characteristics worked into the championship game ('the old tip the cow play') and Little's small stature used to show his ability to overcome obstacles. With the alien invasion, the tempo picks up and the aliens themselves add a dose of old-style Warner Brothers humor. At first, the soundtrack selections seem particularly uninspired ("Everybody Dance Now"), but they end up as part of a running gag where Runt of the Litter is a closet karaoke freak that's actually quite cute. A snippet of the score from Rodney Dangerfield's "Back to School" is an unusual musical note. The filmmakers overdo their film borrowings and references, though. The background visual jokes of "Monsters, Inc.'s" city streets, recently incorporated into "Robots," are checklisted here with a lawn-mowing goat, chameleon traffic signaler and a stork who keeps running into its reflection in a shop window. The film's second half uses a "War of the Worlds" style alien invasion (and in case we hadn't noticed, we're informed of such by Abby), the cornfield crop circles of "Signs," and the town square clock tower climax of "Back to the Future." "Indiana Jones" makes an earlier appearance and a doggie sports announcer played by Christopher Guest's fellow Spinal Tapper Harry Shearer could be a skewed tip of the hat to "Best in Show." That film's Fred Willard and Catherine O'Hara are amusing as aliens Melvin and Tina doing a riff on Oz's wizard. The cleverest homage is of none other than Mickey Mouse himself. The animation itself is no threat to Pixar. Little is nicely done, but other characters lack visual refinement. I can only guess that the animators where attempting to get the look of natural light diffusion, but instead backgrounds appear as if from a foggy mist. For a kids' film, the colors just don't pop enough. (The 3-D version which will be shown at a premium price was not seen by this reviewer.) Vocal work is fine. Braff stretches into his character, while there's no mistaking Zahn and Cusack as Runt and Abby. Patrick Stewart ("X2") has fun with teacher Mr. Woolensworth and Wallace Shawn ("The Princess Bride") is well cast as Principal Fetchit. No stranger to poultry, Don Knotts ("The Ghost and Mr. Chicken") makes a welcome appearance as Oakley Oaks mayor, Turkey Lurkey. "Chicken Little" ties up its loose ends neatly, although its treatment of its bullying Foxy Loxy (Amy Sedaris, "Bewitched") sets feminism back a few decades. A final joke at Hollywood's expense is tickling and features Adam West (TV's "Batman") as the celluloid reincarnation of the heroic little chick.

The sky is falling!” is a line from a fairytale story that I, like many, remember from my childhood. The parable is about a diminutive fowl that, when plunked on the head by a falling acorn, believes that the end is nigh and causes a panic in the barnyard. Walt Disney Pictures takes this tale into the 21st Century in its first foray into the all-digital (and digital 3D, but more on that later) animation world with Chicken Little.” Oh, for the days of that wonderful and special collaboration between Disney and Pixar Animation when they brought us such treats as “Toy Story (1 and 2),” A Bug’s Life” and “Monsters, Inc.” The Mouse House makes its solo entry into the new wave of digital animation in what feels like second team effort. Director Mark Dindal, with Mark Kennedy, revamped the Chicken Little story and handed it over to scenarists Steve Bebcich, Ron J. Friedman and Ron Anderson for screen treatment. The result is something that really feels like it was constructed by committee. The story starts off with the first of several episodes where Chicken Little (Zach Braff), a year after the first incident when no one believed him about the sky falling, is snubbed by all the townsfolk – except for his friends Abby Mallard the Ugly Duckling (Joan Cusack), porcine Runt of the Litter (Steve Zahn) and bubbly Fish Out of Water. Little decides to make his ex-jock dad, Buck Cluck (Garry Marshall), proud of him and goes out for the little league team. This episode seems plunked in the middle without much reason as CL, try as he might, is always overshadowed by the overbearing jock, Foxy Loxy (Amy Sadaris). Then Chicken Little, in a last minute turn around, steals her thunder and is the hero of the day. This is soon forgotten by all when, one night, it happens again, and a stop sign-shaped disk lands on Chicken Little. Despite the fact that his pals can back him up this time, the villagers don’t believe him, yet again, but this time with dire results. Chicken Little” is, in the first half, a little kid’s movie with lots of cute critters and benign action. The second half turns darker and seems more suited for the 10-year old crowd. It’s hard to tell what demographic the film’s marketers are going for. Of course, to placate the adults who will have to take the tykes to see it, there is a lot of wink-wink satire. But, this is dumbed down to the point where the storytellers, for some reason, have to explain the film references they make to the likes of “Raiders of the Lost Ark” and “The War of the Worlds.” The kids aren’t going to care about the references and the adults should know without having to be told so explicitly. The digital animation is surprisingly murky with muted colors and so-so backgrounds. Again, it doesn’t feel like Disney fielded its first-line team for “Chicken Little.” The company is releasing a 3D version of the film at specially selected theaters where Disney Digital 3D projectors are being installed. This high tech ploy may explain the flatness of the 2D release much in the way the early 3D films looked without wearing the silly glasses. Chicken Little” is a mixed bag of an animated feature. It has the occasional laughs but failed to bring that big smile to my face that I always hope for.