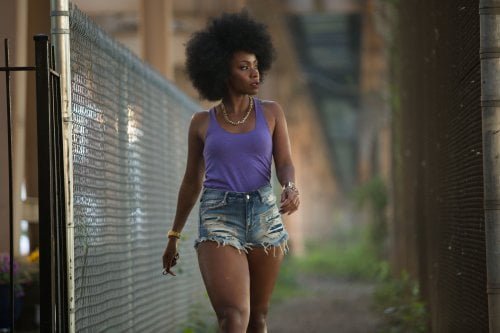 In the ancient Greek play, Lysistrata (by Aristophanes, circa 411 BCE), a young firebrand, led the women of all the city-states in a movement to stop the men from fighting in the Peloponnesian War. Their strategy? Withhold sex until the men capitulate! Spike Lee uses the millennia-old source material and updates it to the mean streets of Chicago, running red with the blood of the innocent victims of gang violence, in “Chi-Raq.”

Spike Lee's output over the last decade has been odd, but with "Chi-Raq," the old Spike is back. Adapting Aristophanes' Greek comedy Lysistrata (with Kevin Willmott), Lee takes on Chicago's unabated homicide rate among its urban Black youth (higher than U.S. troops killed in Iraq, hence the coinage), here with gangs the Trojans and Spartans killing each other and the young innocents who get caught in the crossfire. Lysistrata (Teyonah Parris, "Dear White People") is in a loving relationship with rapper Chi-Raq (Nick Cannon), but when violence breaks out at one of his shows and he retaliates later with guns blazing in the streets, she's fed up. The loss of a little girl, Patty, sends her distraught mother Irene (Jennifer Hudson) to the streets, begging for someone to come forward, the killing having taken place on a busy street in broad daylight. No one does. Lysistrata, encouraged by Miss Helen (Angela Bassett) across the street, asks a group of women just what would cause their men enough pain to stop the violence. The answer is clear - withhold sex. The film is a musical, with one man Greek chorus Dolmedes (Samuel L. Jackson) humorously commenting upon the action. The script is entirely in rhyme, part classical couplet, part echo of Chicago's South Side rap. As Father Mike Corridan, John Cusack delivers a rousing eulogy to Patty that encompasses the area's cycle of poverty, despair and murder. Lee isn't the first to address this issue - Steve James's 2011 documentary "The Interruptors" focused on former ganger turned activist Ameena Matthews and the CeaseFire organization - but little has changed since then. Lee's film, which is overlong, gets repetitively preachy in its home stretch, but it's great to see him back and "Chi-Raq" should shine a new light on a long standing issue. Grade:

The violence between the rival Spartan and Trojan gangs does not stay within their gun-toting society and between themselves. The babies of the women living there have been the real victims and the latest, a pretty little girl named Patti, is the spark needed to make change. Lysistrata comes up with the idea for all the ladies of the neighborhood - shut down all sex with their men. She has a hard time making her case, at first, but the idea gains momentum quickly throughout the ‘hood. With no sex, the tensions turn from the guys killing each other (and others) to getting some lovin’ from their women-on-strike. “Chi-Raq” is a genuine Spike Lee film, one from the heart, and it is very amusing and clever to go back thousands of years for source material. The surprise is how modern the original story is in its fantasy of an ideal world where all the babies are safe. Lee updates setting, costume and dialog (done in poetry) to the present but the spirit of the story needs no tweaking. A world without violence, especially to the children, has been the dream of women since the beginning of time - not nearly so much for the male half of the species, unfortunately. This makes “Chi-Raq” both contemporary and timely in its stance against murder in the streets.