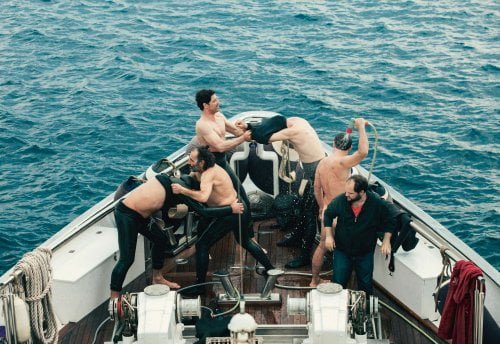 Six men are aboard a luxury yacht in the Aegean Sea on a fishing vacation. To pass the time they concoct a game where everything is measured, tested and scored. The winner of the game, at the end of the trip, will be deemed the best man and awarded a special ring, the “Chevalier.”

A doctor (Yorgos Kendros) and his son Christos (Greek singing star Sakis Rouvas), brothers Yannis (Yorgos Pirpassopoulos) and Dimitris (Makis Papadimitriou) and business partners Yorgos (Panos Koronis, "Before Midnight") and Josef (Vangelis Mourikis, "Attenberg") charter a yacht to cruise along Greece's coast. After comparing the depths of their dives and the sizes of their catch after spear fishing, Yorgos suggests they spend the remainder of their vacation in a contest in which they will be judged by their peers on absolutely everything, the winner wearing for one year the ring of a "Chevalier." Ever since Yorgos Lanthimos broke through with his global arthouse hit "Dogtooth" in 2010, there has been a wave of deadpan dark absurdism arriving from Greek shores. Cowriter (with Efthymis Filippou, "The Lobster")/director Athina Rachel Tsangari ("Attenberg") takes on male competitiveness and insecurity in her latest where the testosterone is so prevalent, female characters exist only as unheard voices at the opposite ends of phone calls or as a point of contention in the ongoing battles. At first, it is a bit challenging to sort out just who is who onboard, but gradually they all fall into place, Dimitris, the only chubby member of the group, making the strongest, most sympathetic impression, the obvious underdog. Once everyone begins pulling out their notebooks, Dimitris incurs the wrath of his brother as Yannis' sleeping posture is being debated for suggesting he isn't really asleep (proving, of course, that he wasn't). Yorgos, who takes every opportunity to make show offy jet ski donuts, is the presumed front runner, but has a secret, as does his biggest competitor, the doctor. Josef is so proud of his erection, he offers use of it to any takers. When the ship's three man crew isn't arguing about who is going to win, they make somber announcements like 'on tonight's menu, the cheesecake will be replaced with lemon pie.' The men buy more time by lying to their wives once their ship has docked, excusing the captain, but retaining the cabin boy and cook. The well liked Dimitris, who has shunned a blood test over a fear of needles, tries to score extra points with a lip sync performance of 'Lovin' You,' capped with amateurish gymnastics. Yannis has points deducted for his spontaneous accompanying sparkler dance. The film is frequently funny as we watch these men take on polishing silver with a vengeance or fuss over their appearance before leaving their cabins, but one cannot help but feel that the film's themes are undercooked. There is a sense of deflation as the outcome looms and the conclusion just trails off into the ether, leaving us with little to really chew on. "Chevalier's" neutral pallete and deadpan humor recall the work of Sweden's Roy Andersson, but he gets a lot more mileage out of one of his short vignettes than Tsangari does out of her entire film. "Chevalier's" macho Mediterranean competition benefits from its glorious location. It's fun to be a fly on the wall with this ship of fools. Grade:

If you like an offbeat, darkly humorous story about men bonding on the high seas, then “Chevalier” is a film for you. When the game begins, they start judging and scoring things like cleaning silver, penis size, brushing teeth, ring tone, sleeping and more. As the story unwinds, the men start to jockey for first place and the coveted pinky ring. “Chevalier” is a guy flick if there ever was one with its testosterone fueled machismo. It makes fun of the contest and punctuates the story with its droll humor over the damnedest things the guys pick to measure, judge and score.