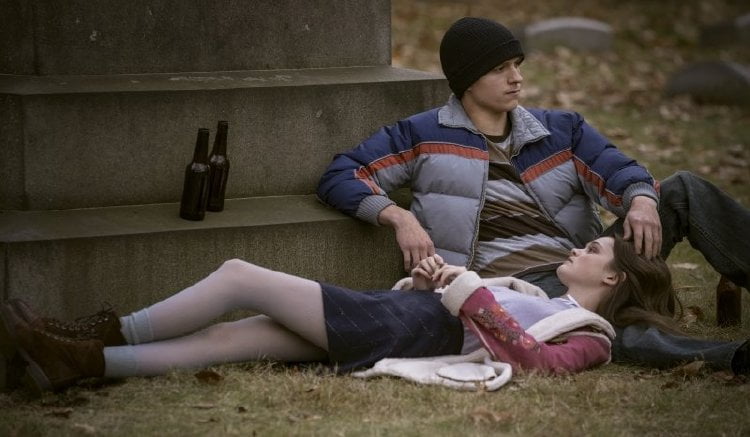 In 2002, a young man (Tom Holland) lays eyes on a young woman in a freshman college class and is infatuated, but when Emily (Ciara Bravo, TV's 'A Teacher') approaches him, he mumbles about a girlfriend back home.  Their courtship will be a continuation of missed signals and when Emily announces she’s heading to Montreal for school, the young man reacts by enlisting in the Army.  Emily, as it turns out, was running away from her true feelings for him, so they marry before he leaves.  The shattered veteran who returns from the Iraq War tumbles into heroin addiction then bank robbery to support it and when he ends up in jail, once again Emily will have to wait for “Cherry.”

The novel, written by Nico Walker from prison based on his own experiences, has been praised for its prose and rawness, if not for a traditional plot.  While organizing their adaptation much like a book with a prologue, ‘parts’ and an epilogue, screenwriters Angela Russo-Otstot and Jessica Goldberg shape the love story as their central focus without detracting from the war time horrors that fueled Cherry’s downward spiral back home.  But they also appear too enamored of their source material – the film runs 140 minutes and there is at least one scene involving a character Cherry tells us he never saw again that could have easily been excised entirely.   That love story focus also informs the suspense worked into the film’s ending which makes little sense when compared to the montage spanning fourteen years which precedes it.

Taking a break from Marvel (if not their Spider-Man), directing brothers Joe and Anthony Russo ("Captain America: Winter Soldier," "Avengers: Endgame") treat the material with a flashy visual style which, combined with Holland’s constant narration, gives the impression the film was adapted from a graphic novel or comic - perhaps a grittier approach was in order here.   While “Cherry” doesn’t shy away from some gruesome war truths or the devastating effects of heroin, the film’s slickness undercuts the material.  Cinematographer Newton Thomas Sigel ("Drive") cannot be faulted, though, several overhead tracking shots particularly striking.

The film’s young star is clearly trying to expand his range and Holland acquits himself well enough (the actor lost 30 pounds to play the drug addicted version of the character), navigating from a naïve young man falling in love to a horrified army medic hopelessly ‘treating’ Iraqi citizens when he isn’t moving pieces of his friends into body bags to the hollowed out vet consumed by smack.  While an unfortunate wig is really distracting, Holland always gets his character, and Cherry’s love of Emily, across while also acing the heavy narration load.

Ciara Bravo deals with an underwritten character, one whose motivations can be inscrutable, but once Emily commits to Cherry the actress goes all in.  Bravo’s junkie scenes with Holland are harrowing, her fearless embrace of the void disturbing.  Support includes Forrest Goodluck ("The Miseducation of Cameron Post") as Cherry’s best friend and fellow outsider James Lightfoot, Michael (son of James) Gandolfini as Cousin Joe, Jeff (nephew of Mark) Wahlberg as Cherry’s fellow medic Jimenez, Theo Barklem-Biggs as the creepy Sgt. North and “Midsommar’s” Jack Reynor as Pills & Coke, Cherry’s drug connection.

“Cherry” may use its love story as its connective tissue, but what we come away with is the unnatural havoc wrecked upon young men’s minds by war, both those too eager to engage with it and those forever damaged by its brutality.  Still, the Russo Brothers have given the story so much surface sheen they’ve neglected to plumb its depths.

A young man (Tom Holland), fraught with emotion and an obviously troubled spirit, robs a bank. Flash back to his first meet with pretty Emily (Ciara Bravo) and a not quite stellar work history as an inept pizza guy. At a moment of weakness, he joins the army and is shipped to Afghanistan as a medic. That is where he suffers the horror that leads to PTSD and, soon, addiction to drugs and the above bank heist by “Cherry.”

Cherry’s story begins with the prologue of the abovementioned bank heist but the tale really begins when he sees, and falls for, Emily in Part 1, “Life begins when I saw you.” Their idyllic life is short lived and, because of his inaction to do anything, Emily declares that she is going to school in Montreal. His knee jerk reaction is to join the US Army.

When Cherry completes his basic training, he decides he wants to be a combat medic and is shipped to Afghanistan, where he receives his baptism by fire. He completes his tour and returns home a hero, with PTSD. This begins his next phase of life – drug addiction. Oh, and Emily is back in Cherry’s life and he introduces her to, as I expected, drugs and addiction.

The addiction leads to crimes and a life of getting money, splurging it on drugs, then suffer through no money and no drugs. This, in turn, leads to where we began at the start of the film. Cherry’s PTSD, addiction to heroin and trouble with his supplier leads him to his new criminal career.

Cherry’s plight and problems, mostly self-made, is a treatise on how our country treats those who risk their lives to fight our wars, the PTSD they suffer and the aftermath – drug addiction and no hope, turning to crime. There is also a kind of sweet love story buried under all the angst.