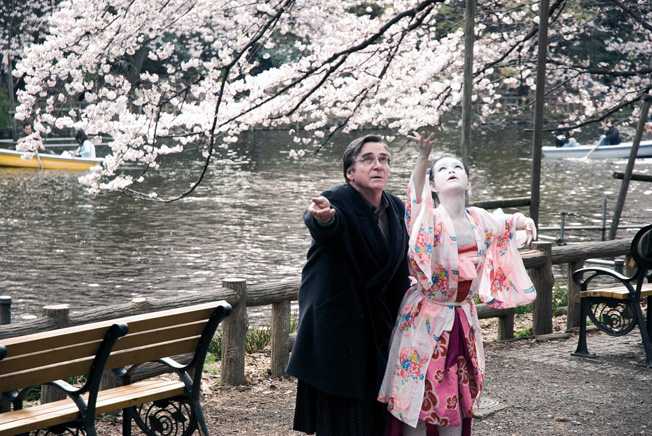 The doctors tell Trudi Angemeier (Hannelore Elsner) that her husband, Rudi (Elmar Wepper), has cancer and does not have long to live. She decides not to tell him the bad news and suggests an impromptu visit to their children living in Berlin. She wants to enjoy their remaining days together but fate will cause things to take a very different turn in “Cherry Blossoms.”

When Trudi Angermeier (Hannelore Elsner, "Go for Zucker!") is told her husband Rudi (Elmar Wepper) is dying, she tries to nudge him towards adventure, but in her heart she knows Rudi is a man of routine. Trudi succeeds in getting Rudi to visit their two eldest children in Berlin, but her dream is to visit their youngest, Karl (Maximilian Brückner, "Sophie Scholl: The Final Days"), in Tokyo, and to see the "Cherry Blossoms." Writer/director Doris Dörrie ("Men...," "Naked"), who has dabbled with Asian themes before in "Enlightenment Guaranteed" and her last film, "How to Cook Your life," is at the peak of her directorial powers in her third decade of filmmaking with this moving exploration of the facets that make up a person. Part homage to "Tokyo Story" and a more emotionally engaging reflection on impermanence than "The Curious Case of Benjamin Button," Cherry Blossoms" is a film of strong sentiment that doesn't succumb to sentimentality. Trudi and Rudi live in an idyllic Bavarian town, where crucifixes are affixed to haus exteriors and ducks parade the streets. Trudi keeps a home full of hearts and flower furniture, but there is an obvious affinity for Japan to be seen in wall hangings, the kimono she wears as her robe and the postcards she keeps in a drawer. Rudi takes the train to work daily and returns to a home cooked meal. When the couple go to Berlin, Trudi's agenda is cultural exploration while Rudi tries to bring home with him, pressing the local weisswurst he's brought upon one and all. Eldest son Klaus (Felix Eitner) and his wife Emma (Floriane Daniel) don't know what to make of the impromptu visit and lesbian daughter Karolin Angermeier (Birgit Minichmayr) is borderline antagonistic, yet it is her girlfriend, Franzi (Nadja Uhl, "Twin Sisters," "The Baader Meinhof Complex"), who takes the senior couple around town. Franzi connects with Trudi in a profound way during a performance of an esteemed Japanese Butoh dancer. Later, alone at a beachside resort before returning home, Trudi engages Rudi in an echo of the dance and although he is confused, one can see the enchantment on his face as he observes his wife's rapture. "Cherry Blossoms" takes a surprising turn at its midpoint, one that finds Rudi in Tokyo with Karl, as bewildered as his elder siblings on just what to do with dad. Rudi strikes out on his own, and after a rough start in the Roppongi district, goes to visit Trudi's beloved cherry blossoms at Mt. Fuji where he finds Yu (Aya Irizuki), a young Butoh dancer who befriends him. On the surface, Dorrie's West meets East story may seem obvious - for every Fuji print in Trudi's home, there is a Bavarian beer chart hanging in Karl's Tokyo-modern apartment - but it is in her examination of how people define each other and how she uses the Butoh dance to connect her themes that one finds the riches in her film. As in "Tokyo Story," the urban children of an elderly couple find no time in their hurried modern lives for parents they can no longer relate to, but Dorrie takes this idea one step further using the character of Franzi, who discovers an important element of Trudi's being that Rudi has failed to recognize. Dorrie is not saying that it is impossible to know another person, but that we accept people through our own experience, and, therefore, only ever know aspects of a person. We see other examples of this throughout the film, such as when Trudi suggests to her Berlin relatives that Klaus drinks too much and is shot down, only to later see Klaus get drunk on an outing with his father in a Tokyo park. Dorrie's other important theme is the relative moment that is life. When Trudi's daughter-in-law swats a fly at the dinner table, all children hold their breath awaiting mom's outburst. Instead the poem 'The Mayfly has but one day,' must be coaxed from her. Shadows on the beach and the cherry blossoms themselves continue the theme, but nowhere is it illustrated more beatifully than in the Butoh dance. The film has been beautifully designed, color used to juxtapose the German and Japanese locations. Dorrie has a great eye for contrast - note a scene where Klaus and Karo sit clothed on a beach backgrounded by a couple rubbing suntan oil on each other. Original music by Claus Bantzer ("Men...," "Dragon Chow") pulls the whole together. The cast is exceptional, an ensemble that convinces as family with Uhl and Irizuki notable as complementary outsider accents.