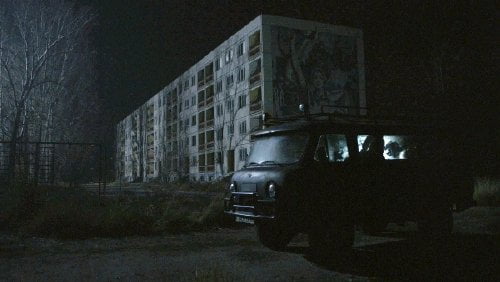 Paul (Jonathan Sadowski, TV's '“$#*! My Dad Says') is thrilled to hear his young brother Chris (Jesse McCartney) intends to propose to Natalie (Olivia Taylor Dudley, "The Dictator") when they reach the last leg of the European jaunt they're on along with Amanda (Devin Kelley), and when he suggests adding an unconventional stop beforehand, Chris is strongly against it. Paul has a history of getting his young brother into trouble, but Chris is overruled when both girls think going on Uri’s Extreme Travel expedition to Pripyat, the deserted city built to house the workers of the Ukrainian nuclear power plant which melted down twenty-five years earlier, in "Chernobyl Diaries."

Coproducer/'story by' cowriter (with Carey & Shane Van Dyke) Oren Peli ("Paranormal Activity") fell upon tourist pictures from a trip to the eerie remains of Pripyat on the web and thought the location could house a great horror tale. Production designer Aleksandar Denic (TV' 'Rasputin') does a first rate job making us believe that we are there, using underground tunnels in Belgrade, a Serbian tractor factory and a decommissioned Hungarian air force base, but the location is where Peli's inspiration started and stopped. "Chernobyl Diaries" is nothing but another take on the endangered American tourists subgenre of such films as "Turistas" and "Hostel." The movie, which mostly forgoes the found footage trope that Peli helped foster, has its moments, but it's all too obvious what's wrecking havoc and the ending is a cliche embellished into illogic. Visual effects supervisor and second unit guy Brad Parker makes his directorial debut and services the material as well as it can be without deviating from a pretty standard template. We meet the kids, get brought up on the itinerary (London to Kiev to Moscow) and the fraternal history. A new couple, Australian backpacker Michael (Nathan Phillips, "Wolf Creek") and his Scandinavian girlfriend Zoe (Ingrid Bolsø Berdal), join Uri's (Dimitri Diatchenko) 'special' tour with all in high spirits. After two hours of travel, though, guards deny Uri entrance because of unspecified 'maintenance' going on in the supposed ghost town. Uri takes them in anyway, using an abandoned checkpoint. He first stops to show them some unusual fish and gives them a fake scare, having told them that nature has reclaimed what man destroyed, but even Uri gets a jolt from an unexpected visitor as they tour abandoned apartments (in the film's best scene). But when they go to leave, Uri discovers the spark plug wires in his UAZ (an old Russian military vehicle) have been chewed through - inside the car. He cannot reach the checkpoint, twelve miles away, on his walkie, so suggests they spend the night in the vehicle. There are dangers during the night, and Uri goes out to investigate with a loaded weapon. Chris runs after him. Shots are fired. The guilty Paul runs out to save his brother. Uri's character is one of the better aspects of "Chernobyl Diaries" as we're never sure if he is what he appears to be, although the matter is settled fairly early on. Acting is decent for this type of thing, especially from Diatchenko. And nature is proffered as a danger in itself as packs of hungry, wild dogs roam the area and the audience sees what the tour group did not after they leave the river. But it doesn't take much to conclude what's really going on here, especially after a copy of "Jurassic Park's" kitchen scene. Once suspicions are confirmed, though, questions begin to arise which the filmmakers never get close to answering. Just think about that twenty-five year gap and procreation. Director of photography Morten Søborg (the "Pusher" trilogy) thankfully ditches the shaky-cam approach, except as referenced on Smart phone video exposing the fate of two characters, an amusing touch, and special effects nicely fill out the both the abandoned town and the neighboring reactor. Like the "Paranormal" movies, those abandoned blocs will keep your eyes darting about, looking through windows and doorways. If you pick out 'the last girl' early on, congratulations. She survives a finale ripped straight from "Night of the Living Dead," but unfortunately survives for Peli to pile on more illogic. If only he'd quit while he was ahead - one can almost hear the air being sucked from the film. The only possible explanation? A sequel to explain it all. Sorry, but good will has already been squandered.