Chelsea on the Rocks 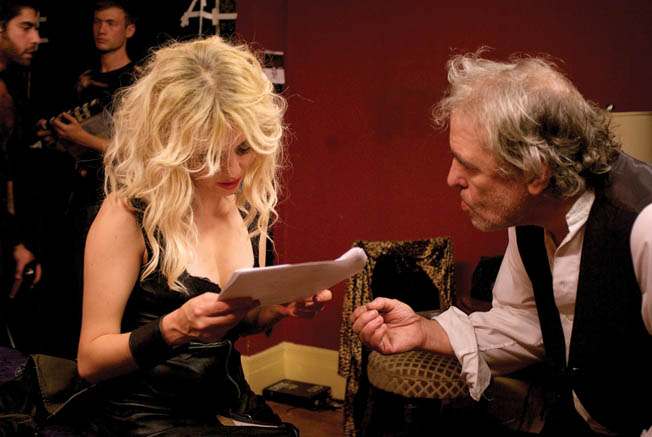 In 2007, long time hotel manager and part owner Stanley Bard was ousted from his position by the Hotel Chelsea's board of directors. The legendary Bard made it possible for many struggling artists, writers and musicians to live at the Chelsea based on trust and barter. Writer/director Abel Ferrara ("Bad Lieutenant," "R'Xmas") interviews then current long term and past residents to form a verbal history of the hotel they all now fear is a "Chelsea on the Rocks."

Ferrara's rambling take on the Chelsea, its occupants and its past is a frustrating thing. Firstly, he never directly identifies who he is talking to, as if assuming his audience should know who he knows. Secondly, in telling the tales of two of the hotel's more famous past residents, Sid Vicious and Janis Joplin, he recreates scenes with actors known and unknown. This is a jarring device made worse by the fact that Vicious, his murdered girlfriend Nancy Spungen and Joplin are all played amateurishly (the actress portraying Joplin doesn't even resemble her), pulling us even further 'out of the moment.' He then compounds the flaw by ending with these actors 'haunting' the hotel, a serious lapse in judgement given the availability of archival footage of these and other famous past occupants. Still, for all the frustrations Ferrara visits upon us, he does succeed in painting a fully fleshed picture of the legendary Chelsea. Ferrara begins, appropriately, with the distinctive twelve story 1883 red brick building itself. Located in the Chelsea district of New York City, the hotel is adorned with black wrought iron balconies, looking like a bigger version of a New Orleans abode. The Chelsea was converted from cooperative apartments to a hotel in 1905 and has always been known as a Bohemian gathering place. Its entrance boasts brass plaques commemorating the works written by Dylan Thomas and Thomas Wolfe there. Part of the reason for the hotels decadent reputation is its dark side. One resident tells us about hearing, but never investigating, the thuds of suicides landing either inside the famed spiral staircase or outside on the street. Ferrara makes many of his odd segues here into recollections of experiencing 9/11 from the Chelsea, before returning to the weird - a seemingly WASPy couple who describe the African bolis, fetishes made from human feces and menstrual blood containing the bones of small children, that they collect and several accounts of haunting. Those who don't die there on purpose often die, or almost die, by other means such as 'Dave,' a man who obsessively recounts the brain hemorrhage that left him incapacitated on his floor for days. A horribly jarring Sid and Nancy recreation intrudes, but at least does one thing of interest - contests Sid's guilt. A witness recounts his version, in which a drug dealer, Dave (Adam Goldberg, TV's "Friends," "Joey;" "2 Days in Paris"), was the killer - but Ferrara fails to attempt to back up his claims against the forensics. Ferrara, whose raspy Bronx voice is itself a character in interviews, wanders the hallways himself, admiring the quirky collection of resident artworks Bard has hung on the walls over the years. He also shows a 'secret passageway' from the El Quijote restaurant, a Spanish place most of the subjects here could never afford. But then, we're told, the new management wants to turn Hotel Chelsea into a kind of Chateau Marmont East - Ferrara brays laughter when told about a possible rooftop bar (imagine past suicide rates had that been around earlier!). Stanley Bard returns to meet his old client, director Milos Forman, in the lobby and we see the arts community at work when Forman is able to connect with Julian Schnabel when Schnabel's daughter pops in. Forman's tale of getting locked outside of his room naked during a hotel fire is a hoot, and Bard comes across as the benign ringmaster of a freak circus. Ethan Hawke gives us another side of the supportive hotelier. Archival footage shows us Arthur C. Clarke, who wrote "2001" at the hotel, Andy Warhol ecstatically receiving William S. Burroughs's autograph and a drunken singalong featuring Joplin, her cigarette ash dangling dangerously. Ferrara goes out with a credit roll, detailing the expulsions of many of the artists he has just introduced us to, their fears realized. "Chelsea on the Rocks" shows its creator's love for its subject, but our enthusiasm is dampered by some of his iffier choices. With his first documentary, though, Ferrara has left a testament to a beloved place whose spirit has been corrupted by commerce.