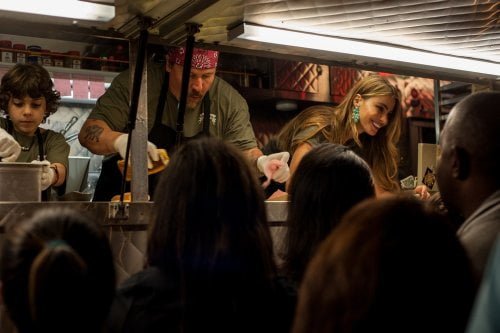 Carl Casper (Jon Favreau) is a master chef who does not tolerate any criticism of his food. When he unthinkingly responds to a negative social media review by critic Ramsey Michel (Oliver Platt), it goes internet viral and he loses his job. With no job and a family falling apart, he decides to buy a food truck to get his career and life back in “Chef.”

Chef Carl Casper (writer/director Jon Favreau, "Iron Man") has been one of L.A.'s bright stars, but after 10 years at Gauloises, he's feeling in a rut. With critic Ramsey Michel (Oliver Platt), whose blog was just purchased by AOL for $10 million, about to visit, Carl wants to up his game, but owner Riva (Dustin Hoffman) insists he stick with his greatest hits. The resultant review is scathing and after a twitter fight and viral video meltdown with Michel, Carl decides to take his ex-wife Inez's (Sofía Vergara) offer of a trip to Miami with their son Percy (Emjay Anthony, TV's 'Rake,' winning) to regroup. After one terrific cubano sandwich, Carl finally goes along with Inez's idea to use her first ex Marvin's (Robert Downey Jr.) offer of a food truck and his culinary star rises once more as he rides back across the country in "Chef." It's refreshing to see Favreau take a time out from big budget summer tentpoles and reapproach his roots in a smaller, character driven film. While "Chef" is bound to formula with its father-and-son-bonding, rising-from-the-ashes road trip tale, Favreau is in complete command, creating comfort food seasoned by a master chef. The man did his homework, having visited many of L.A.'s top dining spots in his IFC series 'Dinner for Five,' then, for this film, working incognito in L.A.'s popular Kogi BBQ truck and his chefery on display here will likely have friends and neighbors angling for dinner invites. One of the smartest things Favreau does is pair his food with regional sights and music, stopping in Miami's Versaille Cuban restaurant and a Little Havana nightclub where Percy's grandad performs before hitting New Orleans's Cafe du Monde and Austin's Franklin Barbecue and Guero’s. He blends the role of social media in restaurant culture with the father and son bonding experience, Percy teaching dad how to tweet, then creating buzz for the El Jefe Cubano truck with twitter, Facebook and Vine. He's also got John Leguizamo on hand as his old grill chef and friend Martin, who hops on a plane to Miami to support Carl's new endeavor, leavening the sweetness of Carl and Percy's time together with some humorous guy behavior. And while Percy proves himself on 'the line,' mom's calls from back home begin to hint that her and Carl's divorce may have been premature. Favreau's obviously called in his "Iron Man" chips with the presence of Downey Jr. as an eccentric monied businessman (it's a bit unclear why he happens to have an '88 Chevy taco truck to give to his marital successor) and Scarlett Johansson as Gauloises' floor manager and former romantic dalliance. Also on hand are Bobby Cannavale as a Gauloises cook and Amy Sedaris as a PR rep who wants to turn Casper's notoriety into a 'Hell's Kitchen' payday. But this is Favreau's show and he's terrific here - demanding, temperamental yet insecure and lovable. Sofia Vergara may play the most perfect ex-wife ever, but she and Favreau convince as a couple who share a zest for life. Also top notch is Platt, whose reactions to food and furor are priceless.