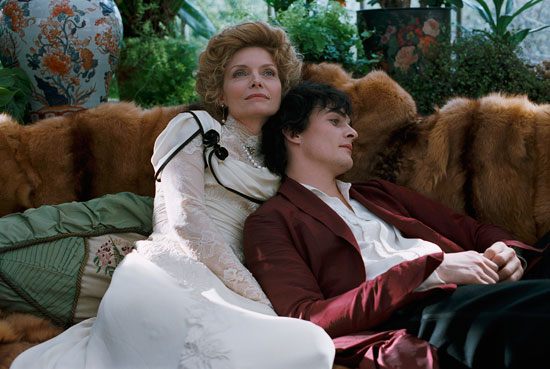 Over the centuries, the courtesan has gone from mere object of desire for countless men to become, by the time of the Belle Epoque of the 1920s, women of powerful means and influence. One of the most prominent and beautiful is Lea de Lonval (Michelle Pfeiffer), a woman in transition from young and desirable to old, but still desirable. She agrees to take on the spoiled, sullen 19-year old son (Rupert Friend) of another former courtesan, Madame Peloux (Kathy Bates), and show him the ropes about love. She soon falls for the young man and the affair that should have lasted only a few weeks continues for six years with “Cheri.”

As a love letter to the fifty-something Pfeiffer, "Cheri" is a beautiful thing to behold. The actress is luminous, dressed in Oscar-nomination worthy costumes that accentuate her fair feminity and housed in stunningly set-decorated environs (those bedroom curtains!). Yet "Cheri" keeps one at arm's length, the subject handled with a light touch that keeps the emotions it should evoke at bay. Last year, Asia Argento ripped through the similarly storylined "The Last Mistress" with firey passion. That was hot. "Cheri" is cool. But it's a lovely bauble.

Director Stephen Frears’s last forays into the lush period drama arena were “Dangerous Liaisons (1988),” his first pairing with star, Michelle Pfeiffer, and “Mrs. Henderson Presents (2005).” He showed an eye for the era material in both films and that eye still has it for visual style. “Cheri” is a beautifully realized vision that makes noted use of gorgeous costuming (by Consolata Boyle), production design (Alan MacDonald) and art direction (Denis Schnegg). Combine these fine craftworks with Lucia Zucchetti’s crisp lensing and the result is a fine looking piece of art that often dazzles the eye. However, looks alone are not enough. The screenplay by Christopher Hampton is based on the titular novels by French author, Colette, and this is the weak link in the artistic chain. The dialog often feels stilted and does not ring true and the characters had little substance and dimension. Michelle Pfeifer helps flesh out her shallowly written Lea, a woman whose lofty stature in the former courtesan world earns her the respect of those around her. Pfeiffer tries hard but her role is under written. Rupert Friend’s Cheri takes a long tome to grow on you, almost too long, and the character only gains your sympathy very late in the film. For much of it, though, Cheri is a moody, selfish man-child who annoys. Why Lea would fall for Cheri is a question I cannot answer. Kathy Bates serves up a fun plate of ham as the gaudy and gauche Madame Peloux. “Cheri” is a good one for fans of period movies and Stephen Frears but left me less than satisfied.