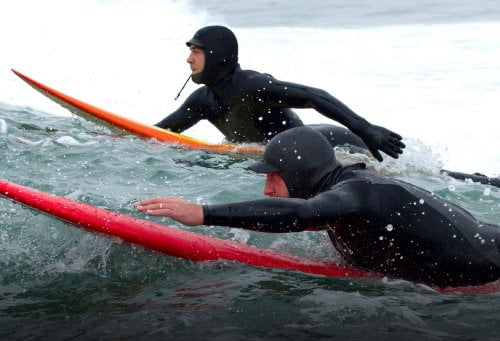 When fifteen year-old Jay Moriarity (Jonny Weston) discovers that a legendary surf break is right near his home, he recruits one of the sport's best, Frosty Hesson (Gerard Butler, "The Bounty Hunter," "Coriolanus"), to teach him how to make it his own. The older man and his young protege become fast friends as they go "Chasing Mavericks."

'Live Like Jay' has become a mantra in Santa Cruz in the ten years since Jay Moriarity was tragically lost at the age of 22 and newcomer Jonny Weston has been directed by Michael Apted ("Gorillas in the Mist," the "Up" series) and Curtis Hanson ("L.A. Confidential," "8 Mile") and lit by cinematographers Oliver Euclid and Bill Pope ("Bound," "Spider-Man 3") so that his eyes shine like beacons, his curly golden locks adding to the angelic purity. But Weston often expresses emotional turmoil and general excitement as if he's about to hyperventilate and the screenplay (Kario Salem, "The Score") is so overstuffed with life altering events some of them drift off into the ether. What "Chasing Mavericks" does phenomenally well, however, is capture the the immense power of the ocean and the strength and wits necessary to attempt to scale its biggest waves. Jay actually meets Frosty for the first time as an 8 year-old when he falls in the water ensuring that his little girlfriend Kim's beagle doesn't. On the verge of drowning, he's scooped out of the water by a man on his surfboard who, it turns out, lives across the street. This is a metaphor for what these two men will continue to do for each other for the rest of their lives. At first Frosty's gruff with Jay when he's approached about Mavericks. The waves are mythical and although Jay's spotted him and his three buddies (surfers Greg Long, Peter Mel and Zach Wormhoudt) riding them, Frosty'd rather no one else know. He's also not keen on taking responsibility for the boy, but his gentle, supportive wife Brenda (Abigail Spencer, "Cowboys and Aliens"), knowing that Jay's looking for a father figure, encourages it. Frosty lays out tough laws and assignments, telling the boy he has twelve weeks before the season's over. Both will face some incredible highs, but also the most serious of lows before then. Butler's good here as the brusque loner turned mentor, then father (nicely done on a parallel with his own children) despite the occasional rise of that Scottish burr. This actor's been pilloried for his romantic comedy roles, rightly so, but has a lot to offer outside of them. Weston's also fine as the almost too-good-to-be-true Jay who struggles with a friend's (Devin Crittenden) lapse (into drugs?), a local bully (Taylor Handley) and that childhood girlfriend now older enough than him to be comfortable in a romance. His actor's tuning fork may occasionally over resonate, but he's solid, determined and likable. Supporting them well are Spencer and Robin Wright lookalike Leven Rambin ("The Hunger Games") as Kim. As Jay's mother, Elisabeth Shue ("Leaving Las Vegas," "The House at the End of the Street") must contend with an abbreviated arc from crushed, irresponsible alcoholic to loving mom in the background, a victim to the film's overcrowding. The surfing-as-life-lessons are well incorporated and the surfing sequences are often breathtaking - even when one's merely realizing the vastness of the sea on a paddling exercise from Santa Cruz to Monterey. And the climax is genuinely enthralling - suspenseful, then triumphant without overt cliche. The film ends with a tribute to the real Jay, though, and once again the film feels overstuffed - too much information jammed into too little of the running time. A simple end credit title would have been more elegant. "Chasing Mavericks" is often quite good, but could have been better with more central focus.