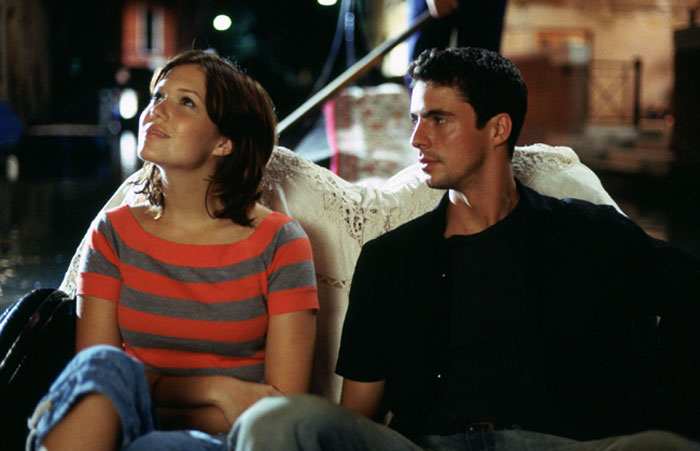 Anna Foster (Mandy Moore, "How to Deal") has spent the last six years of her life growing up under a microscope as the only daughter of the U.S. President. The eighteen year-old is the ideal diplomat, but when dad reneges on a promise to cut back on her security while she goes clubbing in Prague, Anna goes A.W.O.L. "Chasing Liberty."

What can be said about a First Daughter movie that begins with a lame 'before-date-clothes-changing' montage set to "American Girl," a song that will be forever tied to the kidnapping of a senator's child by Buffalo Bill in "The Silence of the Lambs?" Little, unfortunately, even though the President is played by Mark Harmon, a previous portrayer of serial killer Ted Bundy, who spends most of this film hiding presidential cigars. Considering that the filmmakers cannot pump life into this "Roman Holiday" wannabe despite the talented Moore and stunning European settings, these seem to be inadvertent subversions rather than any originality on their part. During Anna's first date with Grant (Stark Sands, "Die, Mommy, Die!") at a DC restaurant, friends of the lad's approach and reach for a camera - big mistake. A swarm of Secret Service descend, the date is history and the boy Anna was attracted to scared off. Detecting a bargaining chip, Anna asks dad for an evening of freedom during an upcoming presidential trip to Europe and he agrees to let her accompany the French Ambassador's daughter to the 'opera,' but Gabrielle (Beatrice Rosen) has grown a bit wild and the opera is really a funky underground club, so Foster sends the usual contingent after the girls. Anna quickly smells a rat, does a quick costume change and pleads with a handsome Vespa-owning stranger outside to help her escape her pursuers. Ben Calder (newcomer Matthew Goode), puts up with Anna's alcohol and skinny-dipping indulgences and confounds her by resisting her charms, but unbeknownst to Anna, Ben is another of dad's agents currently chafing against his 'babysitting' gig. The duo have a whirlwind tour of Europe after boarding the wrong train to Berlin and Ben's feelings begin to change, but neither Anna nor Ben can reveal their true identities. Screenwriters Derek Guiley and David Schneiderman follow a time-tested format (this really is like "Roman Holiday" given a dash of "What a Girl Wants" and more indulgent ending), but although they've come up with a few cute ideas and lines of dialogue, they also allow inconsistencies (Anna's change of hair color only throws people off when plot convenient) and start their central relationship off on a bumpy, grating course that makes both parties unsympathetic. Director Andy Cadiff ("Leave It to Beaver") allows a romantic subplot featuring more seasoned actors to run off with the show, leaving the foreground action high and dry. Moore is clearly talented. When given good lines, her comic timing is aces ('I'm going to die before I get to third base...I mean second base' she announces in the Oval Office), but too often she's hamstrung by cliche. Costar Goode is certainly good looking, but he too is dragged down by his character's constraints. They're provided with a third wheel (a la "Roman Holiday), McGruff, played by Martin Hancock like an over-emoting Rhys Ifans, and surrounded by ethnic cliche's in supporting roles (Joseph Long as sympathetic amateur gondolier Eugenio, Miriam Margoyles as his match-making mama and Adrian Bouchet as athletic Aryan Gus Gus). Most of the film's enjoyment comes from the bantering between Jeremy Piven ("Runaway Jury") and Annabella Sciorra (HBO's "The Sopranos") as Weiss and Morales, a Secret Service team feebly resisting their opposing attraction. The locations are also a plus, with the bridges of Prague, Venice and London prominently featured. Musical selections are varied, from The Roots to Chris Isaak to Puccini, although oddly, Moore does not contribute. "Chasing Liberty" slightly trumps 2003's opening release salvo "Just Married," while traveling much of the same route ('honeymooning' in Venice, the Alps, meddling fathers), but Mandy Moore cannot continue to coast with such middling fare and retain good will - it's time for something a little more cutting edge fare for this promising singer/actress

18-year old Anna Foster (Mandy Moore) just wants to be a normal, happy teen living in the good old USA. But, she is the first daughter of the President (Mark Harmon) of the United States and, though surrounded by Secret Service agents wherever she goes, she is a lonely young lady. When her father announces their upcoming trip to Prague for a summit meeting, Anna (code name Liberty) sees this as the one chance to get away and act like everyone else in “Chasing Liberty.” Following an abruptly aborted date – the Secret Service over-reacts to a hidden camera and breaks up her romantic dinner – Anna cuts a deal with her Prez dad: She will attend the summit on the condition that she is allowed a bit of freedom, with only two agents assigned to shadow her. But, the protective and powerful father has no intentions of letting his only child roam free and he assigns a cadre of agents to cover her every move. That is, until Anna spots the small army and gets away with the help of a motor scooter-riding photographer, Ben Calder (Matthew Goode), without telling him who she is. Ben, though, has his own secret as the pair head off to run around Europe one step ahead of Anna’s watchdogs. When Anna and Ben allude agents Weiss and Morales (Jeremy Piven and Annabella Sciorra), the first daughter not only wants to smell life, she wants to taste it, too. Her first rebellious act is to skinny dip in the Danube (after having a few brewskis), much to Ben’s chagrin. Ben, we soon find out, is an undercover Secret Service agent assigned to keep an eye on his ward, Anna. She doesn’t know this as she samples the forbidden fruits of freedom for the first time. Her plan is to go to the Love Parade in Berlin but she and Ben board the wrong train and end up in Venice. Slowly, their adversarial relationship changes to one of affection – until Anna learns Ben’s secret. “Chasing Liberty” is modern telling of that venerable William Wyler classic “Roman Holiday.” Both films have a princess who is shouldered with the burdens of state and just wants to get away and be a normal girl. Each meets a stranger who helps spirit the lonely young woman away from her official duties and experience life at its fullest. In both cases, the stranger is not what he seems – Gregory Peck was a newspaper reporter looking for an expose in the ’53 film, Goode is an undercover spy for the White House. In both films, the heroine and her “friend” see the sites and fall in love, with “Chasing Liberty” ending on a clichéd “and-they-lived-happily-ever-after” note. Mandy Moore, while I’m not a fan, does have the wherewithal to hold center stage, at least in this light-as-air comedy romance. She certainly shows a whole lot more acting chops than other pop stars who have tried to transition to the big screen. (Think of Britney Spears in “Crossroads” – it makes me shudder.) Matthew Goode is OK as the generic love interest with his good looks and British accent but doesn’t cut a distinctive swath for himself with his generic handsomeness. Stealing the show are Piven and Sciorra as the dogged agents assigned to shadow Anna. They have a secondary romance that, often times, is more appealing than that of the film’s stars – and funny, too. Mark Harmon does yeoman’s work as the protective dad and leader of the free world. Caroline Goodall makes a splash as Anna’s supportive first lady mom. Techs are solid with lenser Ashley Rowe making good use of the many exotic locales – Prague, Venice, Berlin, Washington D.C., London and Cambridge MA are all shown to beautiful effect. This is one of those films where the job of location spotter must have been a ball. I’ve been to all the cities mentioned and the filmmakers show them all in their best light. For all of its derivative flavor, “Chasing Liberty” is an amiable little romantic comedy that should have a great deal of appeal to the 14- to 18-year old teen girl contingent that it aims for. I’m not a 14-year old teen girl but I can still see the charm that Moore has on her movie-going fans. The pop star turned actor, with her winning smile and pretty looks, has a certain charisma that will also appeal to teenaged boys, too, making this a decent date flick. The cliché and derivative nature of “Chasing Liberty” make it a so-so beginning of the year entertainment. It should do well with its niche audience but I doubt it will appeal beyond the teen/young adult set.