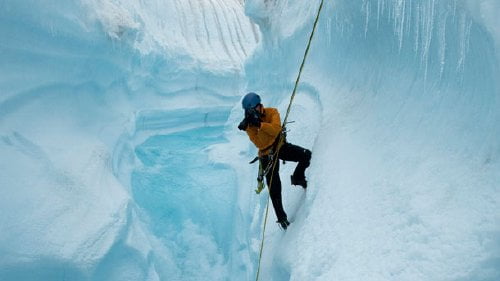 National Geographic photographer James Balog was once a skeptic on the subject of climate change. But, for several years, through his Extreme Ice Survey, he and his team deployed sophisticated time-lapse cameras to capture a video record of the disappearance of the world’s great glaciers and that skepticism changed radically when they began “Chasing Ice.”

James Balog has a master's degree in geomorphology but he discovered he could make more of a difference through photography. After doing photo studies on endangered animals and hunting, he decided to focus on global warming with his Extreme Ice Survey project and so he went "Chasing Ice." Jeff Orlowski's documentary is one of the many subsets of films which have followed 2006's "An Inconvenient Truth," something Balog almost takes a swipe at when he states that people don't want statistics, they want visuals. And yet although the film has some amazing imagery, the bulk of it is more about the obstacles facing Balog than the dire circumstances he is trying to communicate. At a scant 73 minute running time, "Chasing Ice" seems a more natural fit for PBS than theatrical release. Orlowski follows Balog and his team to Iceland, Greenland and Alaska as they position 22 cameras intended to take time lapse photographs of a vanishing landscape. The first attempt is a wash as the environment wrecks havoc on equipment. With everything retrofitted, another season must be waited out to try again. The results are striking. One glacier which receded 8 miles in the 20th century lost another 9 in the first ten years of the 21st. Balog discusses the shock of witnessing apocalyptic change in our single lifetimes and proposes a scary future for his daughter's, where rising sea levels will displace millions and allow storm destruction over vaster areas. We see how Balog himself cannot accomplish what he set out to due to multiple knee surgeries. His two young assistants watch ice for days on end before hanging up on him in order to photograph a massive glacier calving which they compare to Manhattan's tip crumpling in upon itself. The film's last few minutes are its most spectacular - ironically as Balog gives a presentation at a podium. It is here that we finally see those time lapse photos all edited together and witness our known world vanishing.

Filmmaker Jeff Orlowski followed James Balog and his brave team of scientists and adventurers across stark, dangerous landscapes to set up their cameras in the most forbidding of places. Their mission is to record the years long study on glacier recession in some of the world’s most remote and hostile locations. Balog set out to make a visual document of the irreparable damage man has wrought upon the world’s glaciers. He eschews stats and facts (though there are lots of both in this documentary) and concentrates on collecting the video evidence of the now-happening world disaster mankind faces with climate change. The naysayers who booed Al Gore’s “An Inconvenient Truth” back in 2006 as so much liberal doom and gloom get a sobering slap in the face by Orlowski and Balog as they prove beyond doubt that man is destroying the environment. The Extreme Ice Survey seemed a simple task when first conceived by Balog. Go to the store, buy of the shelf video equipment, haul it to near inhabitable places – Iceland, Greenland, Alaska and, of all places, Montana – and set it all up to record for three years. It was not that simple for these researches when they realized that none of the cameras and equipment they needed actually existed. Part of Orlowski’s documentary focuses on the resourcefulness and imagination of the survey team as they create, from scratch, the equipment they need to complete their mission. Balog’s idea is to not fill us with facts and figures but graphically show us, with incontrovertible video proof, the demise, over a few brief years, of the massive glaciers that have been slowly growing for 40000 years. The disturbing images are shown in bits and pieces during the film, culminating with James Balog giving a presentation of his years long work. He and his team take the time-lapse images, with a single frame shot every hour on 25 cameras, and piece them together into a chronicle of video footage that shows three years of glacial recession taking place in a matter of seconds. It is one thing to state the statistic that one glacier, that has been ebbing and flowing forward for tens of thousands of years, is receding at an increasing rapid pace (11 miles) for the last three years. But, when you see this frightening footage with your eyes, well, a single picture is worth a thousand words and “Chasing Ice” tells volumes.