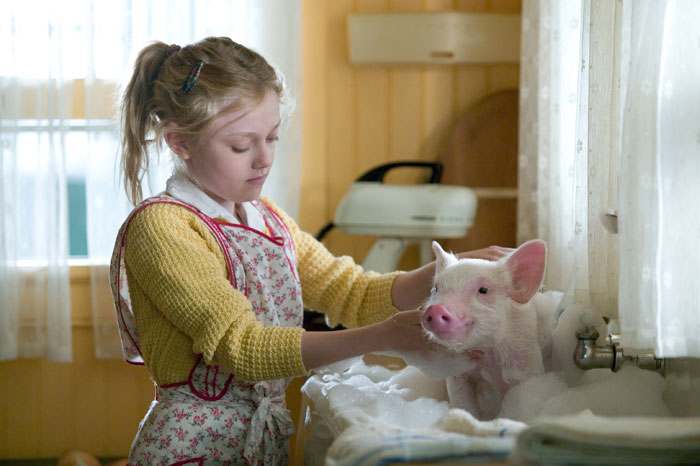 Maine farmer Mr. Arable (Kevin Anderson, "Sleeping with the Enemy") is thwarted in his attempt to dispatch the runt of his spring pig litter by his young determined daughter Fern (Dakota Fanning, "The War of the Worlds"), who vows to take care of the piglet she names Wilbur. But when Wilbur gets bigger and must be farmed out to Homer Zukcerman (Gary Basaraba, "Unfaithful") across the way, a second promise will save Wilbur from the smokehouse when his qualities are advertised in "Charlotte's Web."

Take E.B. white's beloved classic, faithfully adapted as an animation in 1973, and give it the "Babe" treatment and you have an idea of what director Gary Winick's ("Tadpole," "13 Going on 30") 2006 edition is like. Purists are sure to balk, but the computer assisted animals are well voiced and the story is still a weepy charmer. Any additional touches added by screenwriters Susannah Grant ("Erin Brokovich") and Karey Kirkpatrick ("Over the Hedge") - the town doctor, a couple of scared crows - slightly modernize the tale and underscore its message. After the still young and naive Wilbur (Dominic Scott Kay, voice of young Samson in "The Wild") is deposited in Zuckerman's barn, he finds that no one wants to be his friend. The older animals - a group of sheep led by Samuel (John Cleese, "A Fish Called Wanda"), Bitsy (Kathy Bates, "Failure to Launch" and Betsy (Reba McEntire) the cows, and Ike (Robert Redford) the horse - are all aware of what a spring pig's fate will be come winter. Gussy (Oprah Winfrey) and Golly (Cedric the Entertainer) the geese are sympathetic, but loathed barnyard rat Templeton (Steve Buscemi, "Art School Confidential") lays the facts on the line. Sad and lonely, Wilbur's terrified 'Good night' calls are answered by an unseen presence, who promises to converse in the morning. That presence turns out to be Charlotte A. Cavatica (Julia Roberts), a spider whose presence turns the others, especially Ike, squeamish, but Wilbur only sees the beauty of the web she spins. The wise, maternal Charlotte pledges to ensure Wilbur's survival through the winter. One tends to forget just how cute a small pig can be and Winick plays up Wilbur's porcine petiteness, whether being dwarfed within a kitchen sink or left behind a departing school bus, framed in the immenseness of a barn doorway. Scott Kay's vocals may be a bit too reminiscent of Christine Cavanaugh's "Babe" work, but what worked once works again here. Julia Roberts, perhaps the prettiest spider to hit the screen since Susan Sarandon in "James and the Giant Peach," embodies warmth and patient wisdom as Charlotte, but cannot escape her own Julia Robert-ness in the role. The rest of the barnyard critters are all top notch, with Buscemi the standout as the selfish rat. For all the cuteness of the pig, Winick gives the film's sweetest moment, a quick glance through a window, to Templeton near film's end. André Benjamin and Thomas Haden Church are a hoot as a pair of crows freaked out by a scarecrow when they're not harassing Templeton. None of the film's live actors create characters as rich as "Babe's" farmer and his wife. As Fern, Fanning shows devotion, but this is one of her less inspired performances - the kid's been upstaged by the pig. The adults tend towards broad, cartoony exaggeration, but Beau Bridges shows some nice sensible wonder at the events surrounding Wilbur that carries home the story's life affirming themes. The film's final images are as joyful and wondrous to behold as the early, foreboding smokehouse is nightmarish. Winick moves the film through some darkness to get to the light and White's message is served well.