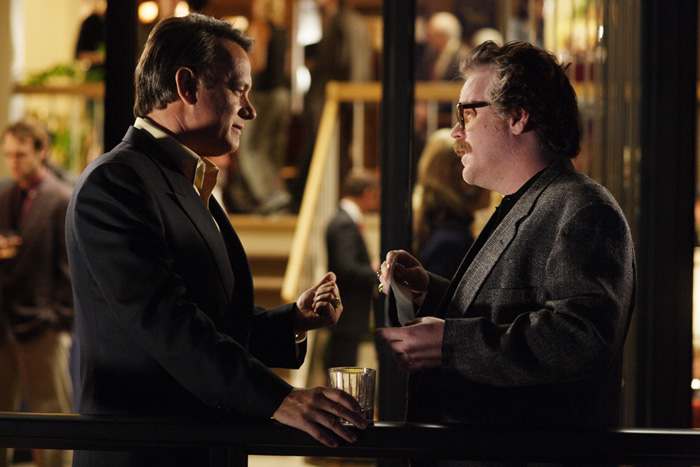 In the early 1980's Charlie Wilson (Tom Hanks) was a congressman from Texas famous for his appetite for booze, coke and women, but when he heard of the plight of Afghanis, especially Afghani children, at the hands of invading Russians he also had a hunger for righting a wrong. With the help of rich Texan socialite (and sometime lover) Joanne Herring (Julia Roberts, "Closer"), the congressman would orchestrate the largest covert operation in United States history - "Charlie Wilson's War."

Working with a sparkling script by Aaron Sorkin ("The American President," "Studio 60 on the Sunset Strip"), director Mike Nichols ("Primary Colors," "Closer") may be the one to finally get through to the American public with a Middle Eastern war-themed film this year. Tom Hanks, going from a bad haircut ("The Da Vinci Code") to a dated, 80's style, nails the larger than life Texan's ability to charm State House visitors while swilling Scotch at 10 a.m. and Julia Roberts, sporting a blonde bouffant, almost, just almost, disappears beneath the skin of rich Houstonite Herring. These two spark off each other like live wires, but even more electric is Philip Seymour Hoffman ("Before the Devil Knows You're Dead") as foul-mouthed CIA operative with a chip on his shoulder Gust Avrakotos. All Hoffman has to do is stand there with his hair standing on end and Woody Allen eye wear and he'll have you howling. Then he opens his mouth and you may just wet your pants. The film begins with Hanks ensconced in a Las Vegas hot tub with two strippers and a Playboy bunny being pitched for a movie role Wilson might finance. Cocaine and booze are flowing, boobs are floating, but Charlie also has his eye on the corner mounted television, where Dan Rather is informing the American public about the Russian invasion of Afghanistan. Back in DC, the scene is almost repeated, Wilson's office manned by three bodacious babes and his highly efficient congressional aide, Bonnie Bach (Amy Adams, "Enchanted"). A fateful convergence finds Charlie tapped by anti-communist Herring, who summons Charlie to support the Mujahideen, and paired with Avrakotos, a good spy with bad style who's itching to get into the thick of things. Herring arranges a visit with Pakistani President Mohammad Zia ul-Haq (Indian superstar Om Puri, "My Son the Fanatic," "East Is East") as a conduit for American arms ('You know you're in trouble when you're told you have character flaws by a man who hanged his predecessor in a military coup.') and then Wilson unexpectedly runs into Herring at an Afghani refugee camp Zia insists he visit, where they meet children who've lost limbs to explosive 'toys.' Wilson eventually manages to get the U.S. Congress to up war aid from $5 million to $1 billion, the Russians are driven out and the Cold War ends. Of course, the following decades produced no friend of America, as George Crile's book succinctly outlines in the last few pages of his book. Sorkin and Nichols certainly give us a taste (Wilson is seen begging for reconstruction funding and being turned down, his quote about 'f*&^%ing up the endgame' closes the film), but the film dares not go too downbeat given the almost comical proceedings up to Wilson's victory. Still, this is an important history lesson eased over with a spoonful of sugar - "Charlie Wilson's War" serves up U.s. foreign policy like a champagne cocktail - a whole lot of bubbly followed by a dash of bitters.