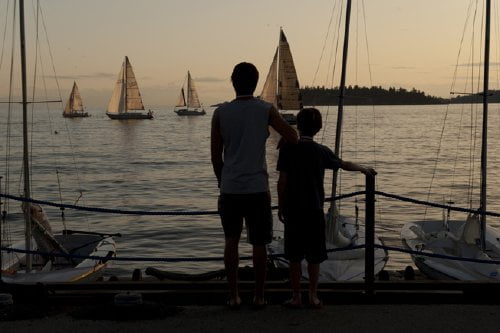 Charlie's (Zac Efron, "17 Again") the son of a working mom in a wealthy Northwestern enclave who's made a name for himself as a top notch sailing racer, a skill which has won him a scholarship to Stanford. He adores his twelve year-old brother, Sam (Charlie Tahan, "I Am Legend"), an avid Red Sox fan who is worried about missing him once he leaves for college. But on the night of a high school graduation party, Charlie, who's agreed to drop Sam off at a friend's, is hit by a drunk driver who puts them in the path of an oncoming truck. Huddled in a tunnel of light, Charlie promises Sam that he will meet him daily when the cannons signal sunset, then a paramedic shocks the life back into "Charlie St. Cloud."

This movie has all the elements of a Nicholas Sparks novel except for letters and logic. Cancer - check. Seashore - check. Death - check. Single parent - check. Young love between a poor and rich kid - check. Except this wasn't written by Sparks. It's an adaptation of a Ben Sherwood novel by Craig Pearce ("Romeo + Juliet") and Lewis Colick ("Domestic Disturbance") with a weird twist that is so bizarre and off kilter from what has come before that it plays like a Harlequin Romance in the Twilight Zone. Really, I thought (once promising) director Burr Steers ("Igby Goes Down," "17 Again") was just guilty of a really awkward transitional scene, but no. So once Sam is dead we get the 'Five Years Later' title and discover that mom's moved to Portland (presumably because Kim Basinger had better things to do than stick around in this movie) and Charlie never did go to Stanford. Instead he is the caretaker of the local cemetery and people in town think he's batty. Charlie has no life because of that promise of his - every day when the cannons go off, he rushes to a clearing in the woods to toss around the ball with his dead little brother. His best buddy, goofy Englishman Alistair (Augustus Prew), who also works at the cemetery, keeps trying to get him to go out, but when he finally does, he only has eyes for Tess Carroll (Amanda Crew, "The Haunting in Connecticut"), a former high school classmate who used to compete against him and who also hangs around the cemetery at the grave of her father. She's about to set sail for six months on a global solo racing event and Sam is getting antsy about Charlie's split attention span. Zac Efron's not a bad actor, but he needs to rough up his image and get rid of that Disney sheen. There's a sex scene in this film, but we don't see it, another strained transition, this time simply a cut that leaves a gaping hole in the middle. Efron's got a likable quality but he's too squeaky clean and it's not natural. Neither is this fictional town, a town where a toy shop can employ three, count them, three young women, all to ogle Efron. It makes no sense that the whole town would think Charlie's bonkers considering they all know his tragic circumstances. This is also one oddly cast film, a mix of names, used to bes, up and comers and unknown Canadians. Why is Ray Liotta here, to play two scenes as a paramedic with the name of - Florio Ferrente(!)? In the 'whatever happened to' department is Donal Logue ("The Tao of Steve") as Tink, Tess's racing coach. James's younger brother Dave Franco ("Greenberg") has a couple of good scenes as Charlie's friend Sully, who goes off to Iraq. Amanda Crew is an offbeat match for Efron, who's prettier than she is and about as tall, but that actually works in her favor. Augustus Prew is a find and shares providing comic relief with a flock of white geese. Charlie Tahan is affecting as Sam. But the writing leaves all of these actors in the lurch. Sam is selfish for holding Charlie to a promise that keeps him from living his life. Ferrente is stuffed in to babble on about miracles and provide a talisman to 'explain' the inexplicable twist. We have no idea how Englishman Alistair ended up in a Northwestern town to work in a cemetery nor why he keeps trying to hook up the hermit-like Charlie. Tink is utterly superfluous, another minor plot point. With 'Igby Goes Down," Burr exhibited a unique directorial voice. Seven years later he gave us "17 Again," an unoriginal genre picture competently done. With "Charlie St. Cloud," Burr's taken another step back. The film isn't fluid and it plays false.