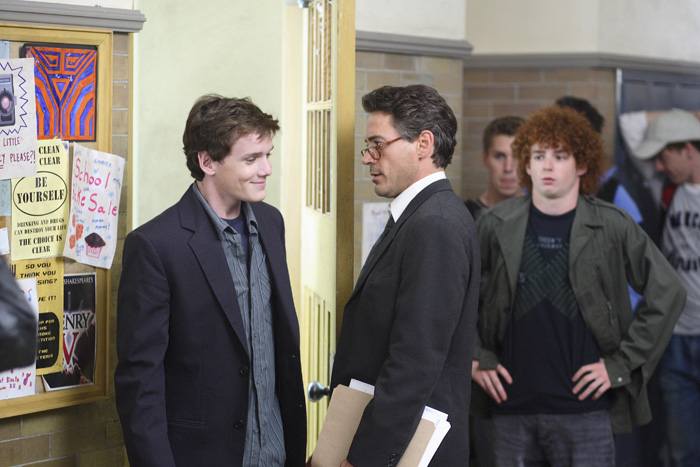 Charlie (Anton Yelchin) is the pampered teenage son of a very wealthy family who has been thrown out of every exclusive school he has attended. He must now face the rigors of public school where he is, at first, treated as an outsider. But, his sympathetic ear and access to all manner of prescription drugs make him the big man on campus in “Charlie Bartlett.”

While not a great film, “Charlie Bartlett” is an entertaining coming of age film that is anchored by its likable star, Anton Yelchin. Yelchin exudes charm and charisma as Charlie and proves that he can carry the film. The principle support surrounding Charlie is well cast with newcomer Kat Dennings, as love interest Susan, a convincing foil to the title character. Hope Davis is spot on as his neurotic mom Marilyn, a woman who leans heavily on her son for support, requiring him to abandon the pleasures of teen hood to be the man of the house. Robert Downing Jr. has his moments as Charlie’s too hard drinking principal, Nathan (and Susan’s dad), a man who would rather have stayed a history teacher rather than bear the weight of responsibility of running a public high school. Tyler Hilton is solid as Charlie’s nemesis turned business partner, Murphey. Dylan Taylor is endearing as Charlie’s friend and strong arm, Len (who is much like Lenny in “Of Mice and Men.” While “CB” starts off with Charlie dispensing advice and prescription drugs to the student body, it takes a positive turn as, following a near-tragic incident involving another very troubled student, he sees the error of his ways and tries to make things right. The resolution of Charlie’s metamorphosis from problem teen to responsible young adult is a bit pat but the likableness of the cast pushes it to positive levels. The story, by Gustin Nash, is a little heavy handed and obvious with its messages but is still entertaining. Director Jon Poll lends a deft hand with his mostly youthful cast and pushes the tale to its satisfying, though routine, conclusion. Anton Yelchin has proved a reliable young actor in his supporting character career. Here he shows that he can anchor a film as its star and should get more leading roles in the future. “Charlie Bartlett” won’t be an Oscar hopeful but still an entertaining tome for teens and beyond.