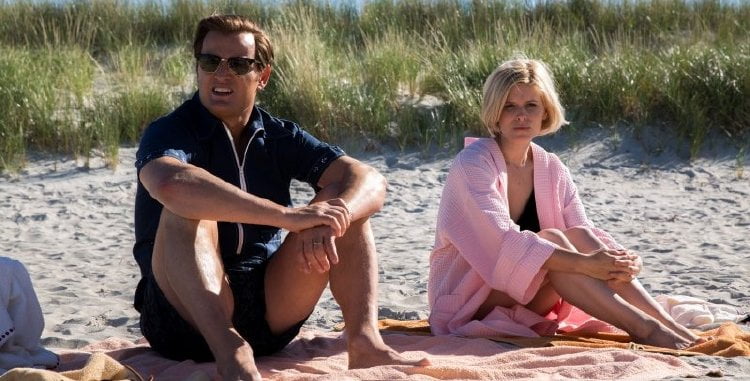 On the night of Friday, 18 July 1969, during a private party for campaign aids, Senator Ted Kennedy (Jason Clark) and 28-year old campaign aid Mary Jo Kopechne (Kate Mara) left for a drive. This decision led to the death of the young woman and the end of any possibility for the man who would be president at “Chappaquiddick.”

Three months after the assassination of his second brother, Massachusetts Senator Ted Kennedy (Jason Clarke) commanded his cousin Joe Gargan (Ed Helms) to find lodging on the fully booked Martha's Vineyard for the 'boiler room girls' who would be attending the annual Edgartown Regatta he was going to sail in. One of them was Mary Jo Kopechne (Kate Mara), a valued member of the Kennedy 'family' and former secretary to Bobby. Ted, the insecure 'black sheep' of the family, took an interest in Mary Jo, who was thinking of leaving D.C. just as he was trying to duck Presidential expectations. They left a private party where alcohol was flowing freely and when Ted drove off a bridge plunging into shallow water, he left the young woman trapped in his overturned car, failing to report the incident for ten long hours after having left "Chappaquiddick." Director John Curran's ("Tracks") measured approach to the political scandal which derailed a second Kennedy presidency works as a treatise on the corrupting influence of power and wealth while also delivering a study of the man who would become known as 'The Lion of the Senate.' Clarke paints a portrait of the youngest brother who could never live up to the siblings who went before him or the expectations of his tyrannical father Joe (Bruce Dern, all buggy-eyed rage) that invites some amount of sympathy while damning his weak moral fiber and entitlement. Yet for all it does right, Taylor Allen and Andrew Logan's 1970 Edgartown, Massachusetts Court inquest-based screenplay takes dramatic license with the critical time between Kennedy and Kopechne leaving the Chappaquiddick cottage and soaring off Dike Bridge and it is too in service to characterization, the imagined, self reflecting conversation too sober on Kennedy's part, too idealized in general. While the filmmakers occasionally favor believable supposition over stated testimony (we see Gargan and former U.S. District Attorney Paul Markham (Jim Gaffigan) rowing Kennedy across the channel that night after securing his promise to report the accident, rather than Kennedy's claim of having swum), they leave other questionable parts of the evening in the dark. Kennedy heads right for Chappaquiddick Island's beach that weekend, where Mary Jo tells him she doesn't think she can endure another Presidential campaign, Bobby's having felt like public service. 'You may not have to,' suggests Ted even as he clearly hopes to keep her in the family circle. The suggestion is obvious - these two are both reluctant participants bucking their own futures. After his disappointing ninth place finish in the Regatta, Ted, his cronies and the boiler room girls head to the family cottage amply stocked with booze and cigarettes. Ted is pensive, but gives a speech in appreciation of the extended Kennedy family and how they worked to uphold the Kennedy name and its ideals. When he leaves with Mary Jo, they stop to continue their earlier conversation, but when, back in the parked vehicle they are observed by Officer Huck Look (Joseph Zamparelli), Ted speeds off on the dirt road heading towards Dike Bridge and away from the ferry that was his stated destination. After depicting the accident, Kennedy surfacing, then diving down to the car before crumpling on the shore, Curran cross cuts between Kennedy and Kopechne, making it painfully apparent that the young woman was alive and terrified for many hours during which she could easily have been saved (the filmmakers also frequently reference the Apollo 11 moon landing, the ironic culmination of JFK's goal achieved two days later when Neil Armstrong made 'one great leap for mankind'). Gargan and Markham return to the scene with the Senator, both making their own attempts to save Mary Jo, but we are given no insight into how they failed to see a woman still very much alive. Kennedy's actions thwart every attempt to help him, his actions either hinting at constructing an alibi, or just plain bizarre, one of a later team of 'fixers' stating that the Bay of Pigs was a better run operation. Ted joins a friend at breakfast the next morning, only to be dragged away by a disbelieving Gargan and Markham. With Edgartown's Chief Aren (John Fiore, "Patriots Day") at the accident scene, Ted takes over his office. Back at the Kennedy compound, Joe's silent contempt for and belittlement of his son speaks volumes, but Ted's own actions continue to defy belief, his decision to wear a neck brace to the Kopechne funeral widely mocked. The sheer size and clout of the team assembled to spin Ted's predicament is noteworthy. And just when Joe Gargan thinks he may do the right thing with a national television address ('this isn't about opportunity, it's about integrity'), Ted feints and we see the light of hope drain from his cousin's eyes. The production, shot in Massachusetts, is authentic to its time and place (we see Chief Aren returning to his office in flip flops, a marvelous detail). Clarke resists the urge to pour on the Boston, his restrained take on the Kennedy accent working in his favor, his portrayal one of a man torn between the heavy burden of his name and the better nature struggling to free itself. But the film's biggest surprise is Helms, whose Gargan, criticized for his actions at the time, is this film's moral compass, his reactions to the circumstances he finds himself in reflecting our own. Mara is also good, creating a serious, thoughtful Mary Jo. Grade:

At first, as I watched director John Curran’s interpretation of the events on that fateful July day nearly 50 years ago, I felt that the helmer and scribes, Taylor Logan and Andrew Logan, had an axe to grind with the Kennedys. That feeling dissipated as the based-on-true-events story unfolds with matter of fact clarity. Ted Kennedy’s very bad decisions that night are telegraphed early in the film as the senator and his friends compete in the island’s annual regatta. Kennedy, against the advice of his crew, makes a decision during the race that takes an ensured win and turns it into defeat. The rest of the film shows the occurrence and outcome of that very bad decision, flashing back and forward between before, during and after the tragedy. The filmmakers delve into the Incident in great detail that is researched with meticulous care. The chronicle of the events is clearly laid out, even with the frequent back and forth in time, and tells the what-the-hell-did-you-do-Ted downfall of a man who seemed destined, until then, to follow in his brother Jack’s presidential footsteps. Jason Clarke looks nothing like Ted Kennedy but the actor, as the tragedy unfolds, gives convincing gravitas to the man who tried to hide, and lied about, his complicity in Mary Jo Kopeckne’s death. Kate Mara does not get much screen time but the imagined depiction of Mary Jo’s horrific end is done with gut-clenching tension. The actor’s portrayal of her horrible, needless death is wrenching in its believable reality. The big surprise in “Chappaquiddick,” though, is Ed Helms as Teddy’s cousin and best friend Joe Gargan, who was the not listened to voice of reason as Kennedy ineptly “handled things.” Bruce Dern gets the most out of a cameo role as wheelchair-bound Kennedy family patriarch, Joe Sr., especially when Ted asks for his advice. The stroke victim’s one word answer? “Alibi.” This says volumes. John Curran and company create a solid historical telling of a sad event that ended a young life and caused one man’s near ruin. (Ted Kennedy went on to be the eminence grise of the United States Senate, but never president.)