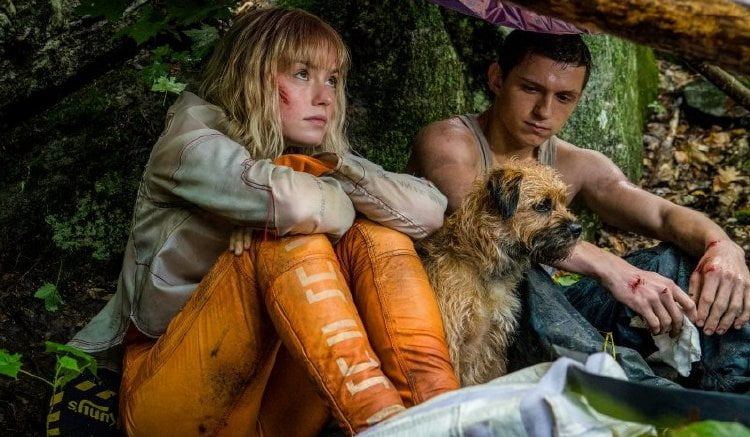 When Viola (Daisy Ridley) crash lands on New World in the year 2257, she’s found by Todd Hewitt (Tom Holland) who is determined to protect the lone member of a gender who has disappeared from his home planet.  While women could keep their thoughts to themselves, the men of New World cannot, their innermost secrets broadcast to one and all as The Noise, a phenomenon that makes them “Chaos Walking.”

An interesting concept is treated inconsistently in this moderately engaging dystopian sci-fi thriller that wears its YA roots on its sleeve.  "Spider-Man: Homecoming's" Christopher Ford adapts the YA novel 'The Knife of Never Letting Go' with its author Patrick Ness with a frustrating cart before the horse approach, presenting the phenomenon of The Noise in what appears a slapdash manner before we learn that various individuals have more control than others and director Doug Liman ("Edge of Tomorrow") does little to take advantage of the implicit mentor/protégé relationship between Todd and the villainous Mayor Prentiss (Mads Mikkelsen).  He’s also somehow managed to elicit a bland performance from Mikkelsen, whose red fur coat is more memorable than his Mayor.

The film follows the same world building conventions as other YA adaptations like “The Hunger Games” or “Divergent” where separate districts represent different ideologies.  In “Chaos Walking,” Todd lives in what appears to be an all male Western frontier, its ‘town’ fashioned of basic wooden buildings and dirt roads, the occasional pod-like structure hinting at something more futuristic, transportation provided by horses.  He lives outside the town on a farm run by Ben (Demián Bichir, "Land") and Cillian ('Sons of Anarchy's' Kurt Sutter) who’ve tried to protect him by keeping him in the dark about their settlement history.  Todd, therefore, believes The Mayor’s version of events – that all their women were massacred by the planet’s alien race the Spackle – and is unaware that there are any other human settlements outside of Prentisstown.

Todd witnesses Viola’s spaceship crash and sees her escape without realizing she’s female and so reports what he saw to the Mayor, noting that the survivor ‘had no Noise.’  Once he runs into her in the forest with his dog Manchee (Wiston and Lamborghini), though, he is determined to keep her from harm.  Of course, his Noise threatens to betray her (as well as providing comic interludes when he broadcasts his infatuation).  In town, goaded by the Mayor’s son Davy (Nick Jonas), he uses his Noise as a weapon, formulating a giant snake to attack.  This is noted with admiration by the Mayor, who will later exhibit a more sophisticated ability of this same talent.

After Ben provides Todd with a map showing the route to Farbranch, the settlement he directs the boy to escape to with Viola, the Mayor and his lackeys reveal their true nature, determined to head off the mother ship which will be following Viola’s ill-fated scouting one.  Todd will face other obstacles, like the underwritten character of The Preacher (David Oyelowo) who all but kills Todd’s spirit.

With a cast that features Mikkelsen, Holland, Ridley, David Oyelowo and Cynthia Erivo, it says a lot that the most memorable performance comes from Bichir who has little screen time.  The Noise, presented here as a kind of buzzing, amorphous halo effect, should have been a primary focus of the film but is actually under-utilized - Viola, for example, never seeks to take advantage of it.  As the book this was (somewhat loosely) adapted from is the first in a series and the film’s ending fails to answer a number of questions, we can assume this was meant as a franchise starter, but this kickoff is more “Divergent” than “Hunger Games.”

It is some time in the future and Todd (Tom Holland) lives in a world without women and the men suffer from “the noise” – their very thoughts are unfiltered and can be heard by any and all. A young woman, Viola (Daisy Ridley), crash lands on the planet and Tom vows to protect her from the many dangers she faces in “Chaos Walking.”

This dystopian science fiction tale, directed by Doug Liman, has an interesting premise with the “noise.” But it is one that gets in the way of the story flow, mainly because the effects of the noise vary wildly from one man to the next and, until late in the story, goes unexplained. The sole woman – that is what we are led to believe, anyway – does not have this affliction.

The story, by Christopher Ford and Patrick Ness, is the first from Ness’s YA trilogy titled The Knife of Never Letting Go, so I imagine there will be more to come. The clever hook of the “noise” is interesting but the concept of it and how it works is muddled and frequently annoying in its inconsistencies.

The strong and capable cast would lead one to believe there would be a better story and characters. Few, though, evoke any sympathy, never mind empathy, except Damien Bichir who, as Todd’s mentor/father-figure, garners such in what is at most a cameo role, but a good one.

As I watched Doug Liman's dystopian tale, I had the strong feeling, throughout, of the 1997 Kevin Costner film, “The Postman.” That too was a dystopian tale but with more than one woman on board and it, too, was fraught with inconsistencies. Maybe the problems of story and the “noise” will not be noticed by the Young Adult audience at which it is aimed. Then again, kids are smarter than we give them credit for.