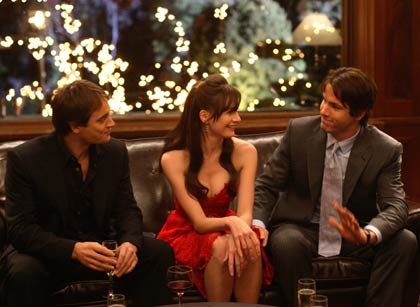 Corporate trainer Frank Allen (Ryan Reynolds, "Definitely, Maybe") believes that life should be controlled by strictly followed sets of lists but when his wife Susan (Emily Mortimer, "Lars and the Real Girl") inadvertently upsets his schedule one day, he lets his guard down every so slightly to indulge a whim and his life spirals into a prime example of "Chaos Theory."

Screenwriter Daniel Taplitz is beginning to specialize in the romcom with a gimmick - his last, "Breakin' All the Rules," starred the author of The Breakup Handbook and was entirely contrived. This latest effort, starring the author of The Five Minute Efficiency Trainer, could have applied more of its titular conceit to its structure - the film isn't clever enough working Allen's principles into his love life and has an over reliance on malevolent behavior to move its plot. Still, even with its premise entirely abandoned by its third act, "Chaos Theory" is a vast improvement over "Rules" largely due to the grounding effect of Emily Mortimer's natural performance. "Chaos Theory" is told in flashback by Allen to his prospective son-in-law Ed (Mike Erwin, "Pretty Persuasion") whom Frank has caught sneaking away. Seems Jesse Allen (Elisabeth Harnois, "Pretty Persuasion") has admitted that very morning to sleeping with someone else during a two week breakup period and Ed has been thrown for a loop. Frank decides to impart a life lesson, beginning in the lobby of the very hotel in which they now sit on a New Year's Eve decades earlier. As a group of tipsy friends talk resolutions, the much admired Susan declares she will choose her husband from among them and Frank wins the prize over his best friend Buddy (Stuart Townsend, "About Adam," "Head in the Clouds"). Seven years later, Susan's grown a bit tired of her husband's rigidity and, in an attempt to get him to loosen up, tries to give him ten extra minutes on a morning he must take an hourly ferry to give a downtown lecture. But she turns the clock back instead of forward. A spiteful ferryman (Ty Olsson, TV's "Men in Trees") will not let Frank on the 8 a.m. ferry at 8 a.m., so Allen is embarrassed by giving a lecture on time management one hour late. Later, at the hotel bar, he resists Buddy's urge to hook up with two women, but when one of his lecture attendees, Paula (Sarah Chalke, TV's 'Scrubs') comes on to him, he goes with the flow. To a point. Frank is a married man who loves his wife, he tells the aggressive Paula, but nevertheless, by the next morning as circumstances are perceived at home Frank is not only a philanderer but has just fathered a newborn. Susan throws him out. Determined to restabilize his life, Frank undergoes tests to prove he is not a new dad, but he gets more than he bargained for when the results come in. If a highly organized life has led him to this, he thinks, he will change and live by whim. Soon even his Porsche-driving Buddy is trying to dissuade him from such behavior as streaking at hockey games and riding a Harley without a helmet, but it is not until the events of seven years earlier are rehashed most dramatically at a lakeside cabin as Susan and Jesse (at 7 years, Matreya Fedor, "Slither") wait anxiously with police that the Allen family can move forward. That third act could have gone off the rails, but director Marcos Siega ("Pretty Persuasion") achieves a dual tone of buddy-film-as-romance and familial warmth. In addition to what is basically a middle age crisis driving the romantic woes, there is a child to be considered, one who is established at the onset as having a great relationship with dad. Reynolds, in the midst of a career makeover, is, as in "Definitely, Maybe," unable to propel a lead character acting foolishly into our sympathies. He's at his witty best as his older self reflecting on his earlier mishaps. Better are Mortimer, who portrays golden girl turned harried homemaker desperate to right a severe emotional tear. Stuart Townsend does a great job flipping on a twist, his shallow playboy suddenly giving way to something deeper. The highly billed Sarah Chalke plays such a thoroughly unlikable glorified cameo one wonders why an actress of any name would have taken the part. "Chaos Theory" is a so-so romantic comedy that doesn't make good use of its premise but gives off enough warmth to make it palatable.