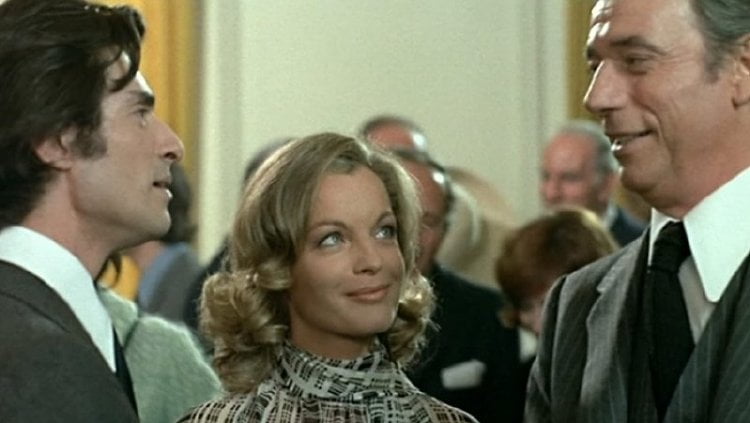 Artist Antoine (Umberto Orsini) is surprised when successful cartoonist David (Sami Frey) arrives for a wedding, not having seen him since before he married Rosalie (Romy Schneider).  They're now divorced, he tells the man, Rosalie only having married him because David left.  Now she is with another man, the owner of a metal scrap yard, but David’s reemergence will test the love of "César and Rosalie."

Cowriter (with Jean-Loup Dabadie and Claude Néron)/director Claude Sautet ("Un Coeur en Hiver") takes his own stab at a “Jules et Jim” style love triangle with delightful, and very French, results.  Yves Montand’s César is an intoxicating creation, a coarse charmer impossible not to fall in love with, despite 1972’s chauvinistic undercurrents.

This is the type of movie that leaves one with a smile on one’s face through much of its running time, the cast posed for the wedding photo of Rosalie’s mother in pouring rain, their spirits undampened, one such example.  This is followed by a macho joust, David passing César on the way to the reception causing César to run his car into a field when he tries to overtake him, ‘explaining’ his mastery in having saved the occupants of the other car.   And this is before César knows that David is his live-in lover’s storied ex.

At the wedding, César, unsurprisingly, is the life of the party, smoking a cigar and conducting a rousing sound effect version of a Bach piece, which David asks about as Rosalie quietly reconnects with him.  ‘It’s the only one he knows,’ she tells him of the classical piece, a piece he learned for her.  This exchange tells us everything about this woman and her two lovers, the one who left perhaps better looking, younger, more cultured, a celebrated graphic artist who allowed her her freedom while the current one is coarser in his tastes, and, as we will see, driven to violence by jealousy, but a man who needs her.  When César resorts to lies to ward David away, his actions have the opposite effect, but the man then humbles himself to win Rosalie back, creating a sprawling family which includes the man he thinks makes her happy.

Film Movement’s virtual reissue of three Romy Schneider films, the actress having died tragically young at the age of 43 in 1982, is a marvelous introduction to her work for those who have not yet had the pleasure.  She had a distinct allure on film, one which serves her well here.  Yet ironically, in the two Sautet films, it is her male costar who grabs the attention.  Frey, like Fabio Testi in Zulawski’s “L’Important C’est D’aimer,” is rather passive while Montand commands the screen.  (Watch for a teenaged Isabelle Huppert as Marite, one of the sprawling family members César assembles at Rosalie’s childhood beach house.)

"César and Rosalie” is a beautiful meditation on the mysteries and dynamics of love.  It’s often quite funny too.  This one’s a must see.

Cesar (Yves Montand), a gregarious and amiable junk yard mogul, is madly in love with his mistress, Rosalie (Romy Schneider), and his life is good. Enter David (Sami Frey), a handsome guy who used to be Rosalie’s main squeeze five years ago. His arrival into the couple’s life throws the unwittingly jealous husband into a frenzy in “Cesar and Rosalie.”

Claude Sautet’s 1972 film is reintroduced to today’s captive movie audience by the Film Movement retrospective featuring Romy Schneider. With “Cesar and Rosalie,” the lovely actress is, once again, the object of affection for two very different men. Cesar is in the rough and tumble scrap business while David is a cartoonist with a small publishing company and both vie for Rosalie.

This romantic triangle yarn is owned by Yves Montand as Cesar. Yes, he adores Rosalie and she, when he acts normal and not crazy jealous, loves him back. But, that jealousy is all consuming and it is downright funny as he jumps, with manic pace, from the reasonable guy dealing with a rival to the madman who lies, cajoles and threatens in his effort to keep Rosalie for himself. His problem, taken to comedic heights, is that his jealous actions drive her away – and, maybe, into David’s arms.

Sautet directs his trio of stars with an eye to Montand’s over the top, very funny and edgy manic need to keep his lover. I never thought of Yves Montand as a comic actor and funny man. But, here, he excels in his role as Cesar and I never would have guessed it.

"César and Rosalie" is playing virtually at the theaters listed here.