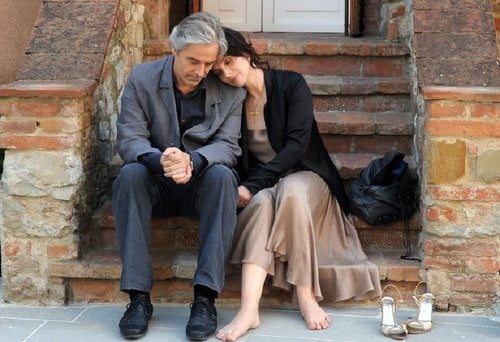 A woman (Juliette Binoche, "Flight of the Red Balloon," "Summer Hours") arrives late to a literary lecture in Florence given by British author James Miller (opera baritone William Shimell in his film debut). She's distracted by her son and leaves early, but has an appointment to meet the man later to discuss his book which proposes that a copy of an artwork is as valuable as the real thing in "Certified Copy."

Writer/director Abbas Kiarostami ("The Wind Will Carry Us," "Ten") moves out of his native Iran for the first time for a provocative look at the male/female romantic relationship using James's art theory as a template - how we present ourselves vs. who we really are. Those who adhere to the 'the couple are strangers pretending to be married' interpretation point to an early scene between the (unnamed) woman and her son (Adrian Moore), who teases her about her obvious attraction to the author, but why would these two act so familiarly during the lecture, disrupting it, if they did not have the entitlement of family? When James arrives at her antique shop later, they do, indeed, seem to be meeting for the first time, but he is itchy to leave her environs (she tries to tantalize him pointing out a 'copy' of a sculpture) and suggests they just drive somewhere. This extended car sequence is classic Kiarostami, who has shot entire films within the confines of a car. This allows us to focus on conversation while also being given a societal snapshot, a travelogue. She acts giddy and asks him to autograph the half dozen books she's bought. The direction for her sister's copy gives way to an analysis of her sister's relationship, one she finds self-deluding for adoring her not-much-of-a-catch husband and being happy with simple things, but which he finds truthful. Her surprise destination is Lucignano, a town whose city hall houses the Gold Tree of Love which newlywed couples wish upon for eternal love and happiness. She delights in this, but the idea turns him sour. She agrees to take a photo with a newly wedded couple, but it takes the bride herself to cajole him. She also takes him to see a painting that was called a master for years, then debunked as a fake, and is put out when he is less interested in it than she expects him to be. Then the film begins to pivot. Sitting outside, James describes a moment he's long remembered about a woman in Florence, French he thought (like his present companion), telling her son about the statue of David, how it is a copy and where the original is stored and how the boy seemed disconnected from his mother. Her reaction tells us everything - she is being provoked. After that, the couple stop for coffee and he receives a phone call which he heads onto the street to take. The patroness (Gianna Giachetti) admires her husband's manners and she goes along, countering with his less admirable traits. From this point onward, the couple behave like old marrieds, she trying to recreate the passion of their youth, he insisting on the status quo, a change naturally dictated by time - but which is the original and which the copy? The film ends with James having to make a decision - does he stay with his sexy and available wife, draped across the bed of their honeymoon hotel room or does he leave to catch the 9 p.m. train that's been waiting all day? Kiarostami's inverted approach to the dissection of a marriage recalls other films, like Harold Pinter's "Betrayal" (the original?), or even a more recent film like "The Eclipse" where a romance and a ghostly presence develops during a literary conference in Ireland. Never for a second did I feel like this couple were play acting, mainly due to the intensity of feeling, the presence of a past, conjured by the actors. Binoche, who won Best Actress at Cannes for this role, has never been more magical and mercurial on film. She finds her 'original,' the younger woman whom James fell in love with, and her spirit becomes lighter and lighter as she does. Shimell, who strongly resembles David Strathairn, is blessed with a beautiful voice and really sparks with his costar, jabbing and feinting against her seductions. Tuscany, with its romantic towns and countryside, its art and restorations, is the perfect setting for this story. The old and new are always juxtaposed, Lucignano's newlyweds countered by an aging couple, notably introduced leaving a church, and another older pair who are pulled in by Binoche to settle an argument. The women quickly agree, the man advises James on how to read his wife's desires. Time, evident throughout, bookends the film. James is introduced being late to his own lecture and left deciding on whether to be late for his train. Is the absence of self, the state of affairs she is trying to change with him, a mere copy of the real thing?