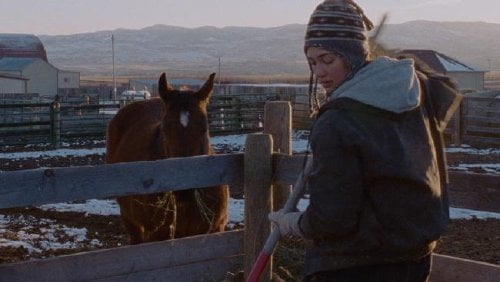 Laura Wells (Laura Dern) is a lawyer trying to get her disability claim client, Will Fuller (Jared Harris), a better deal, until things go very wrong. Gina Lewis (Michelle Williams) and her husband, Ryan (James Le Gros), are living in a tent on the site of their new home-in-progress. Jamie (Lily Gladstone) lives a solitary life as a ranch hand until she meets Beth Travis (Kristen Stewart), a struggling young lawyer who hates her job. These stories are all about “Certain Women.”

In Livingston, Montana, lawyer Laura Wells (Laura Dern, "The Wild") has her hands full with a desperate client. Her lover Ryan (James Le Gros, "Drugstore Cowboy," Night Moves") is married to the single-minded Gina Lewis (Michelle Williams, "Wendy and Lucy"), whose determination to build an 'authentic' home includes convincing senile family friend Albert (Rene Auberjonois, "McCabe and Mrs. Miller") to part with a pile of cut sandstone that used to be the town's schoolhouse. Four hours away in Belfry, a rancher (Lily Gladstone, "Jimmy P") is isolated with her animals until she wanders into a legal workshop for teachers. Drawn to the freshly minted lawyer, Beth Travis (Kristen Stewart), who teaches it, the rancher is dismayed to learn Elizabeth couldn't handle the commute and heads out to Livingston to find her in Kelly Reichardt's ("Meek's Cutoff," "Night Moves") "Certain Women." Adapted from three short stories by Maile Meloy, "Certain Women" features the kind of beautiful writing, direction and acting that say more in what is left unsaid. Consider how much we learn about Elizabeth Travis's legal career in the rancher's search for her, law offices in Livingston, Montana unfamiliar with the young woman. A fading old man's love of the quail call provides two moments of differing emotion while a rancher's easy interaction with her horses and dog tell us much about who she is (the film is dedicated to Reichardt's late dog Lucy, who appeared in her "Ode to Joy" and "Wendy and Lucy"). Laura returns from a lunchtime tryst to find Fuller (Jared Harris, AMC's 'Mad Men,' "Lincoln") fretting about her lateness. But they didn't have a meeting, the lawyer frustrated by her client's inability to accept that his having taken a settlement from a contractor disqualifies him for suing for further damages in the workplace accident that's left him with double vision. A trip to Billings for a second opinion seems to settle the matter, Fuller listening to the male lawyer, but Laura's awoken that night by Sheriff Rowles (John Getz, "Blood Simple") when Fuller takes security guard Big Man (Joshua T. Fonokalafi) hostage. At a campsite which we learn is building site, Gina's annoyed by her sullen daughter Guthrie's (Sara Rodier, "The Future") failure to help her pack up. Ryan tells Guthrie that they must both be nice to Gina because of all the things she does for them. When Gina offers to buy Albert's sandstone, though, Ryan gives the clearly confused man an out. She's annoyed, but when they return with a flatbed and begin loading stone, Gina's happy wave to Albert isn't returned. This midsection of the film has frequently been cited as the least compelling, but offers a lot to those willing to read between the lines. A star is born in the film's final segment, Lily Gladstone investing the lonely rancher with so much inner life her failed attempt at connection is devastating. Under the wide expanse of the Montana sky, the rancher lets her horses into the field. She drives a tractor out, followed by her cheerful little Corgi, to drop bundles of hay, then mucks out stalls. Making an evening trip into the town, she follows people into a school where a young woman writes her name, Beth, on the blackboard with such small letters it's like she doesn't want to draw attention. Reading from prepared notes, she takes a historical approach to the legalities of education, but the three teachers in attendance only want to know about pay and parking places. The rancher lags behind and learns of Beth's weariness and hunger, so she takes her to the local diner and hears more, offering only one story about riding bareback with her brothers. On the night of the next class, she has a surprise, something magical to break Beth's arduous routine, but it's not enough to bring her back and when the rancher finds her outside her Livingston office, she doesn't find the words to express her feelings. Reichardt circles around one more time to an unexpected connection and a family settling into another man's foundation. Shooting in 16mm (Reichardt made the decision when digital photography made snow look flat), cinematographer Christopher Blauvelt ("Meek's Cutoff," "Night Moves") captures majestic mountains ringing flat wide open spaces. Characters are observed in unshowy fashion. Reichardt lets her stories unfold in such low key fashion, they seem almost muted, but "Certain Women" has a strong emotional undertow beneath its placid surface. Grade:

The trilogy of stories mentioned is very loosely tied together, each with a single thread to the others. This allows us to focus on the characters and characteristics of the women and each story stands alone, so we get three for the price of one. Laura’s client took a bad deal in his disability insurance suit and, when she plans to fight for Will, he simply gives up. In desperation, he takes a security guard hostage and Laura volunteers to intercede for the police in a short but intense standoff. Gina, as she and Ryan build their home, visits an elderly neighbor, Albert (Rene Auberjonois), who has a pile of unused sandstone. She offers to buy the stone and he offers to just give it to her. But, he is confused and changes his mind. Eventually she gets the sandstone slabs but is wrought with guilt over it and Albert. Jamie toils every day for long hours tending to the horses on a ranch. She ventures into town and, at a local school, sees a group of people going inside. She follows them into a classroom where Beth is teaching a course in school due process. Jamie watches from the back of the class and, afterward, offers to show Beth the way to the local diner. Jamie makes a point of attending Beth’s class and, for her, she has a new friend. Director Kelly Reichardt adapts the short stories by Maile Meloy and the result is femme-based trio of slice-of-life tales about women and their lives. Casting is solid with each of the lead characters fully developed in a short time. Dern, Williams and Stewart all fill their characters convincingly. But, the real gem is the subtle performance by Lily Gladstone as the lonely ranch hand and, with a combination quiet observation and costuming that make her look like a man in silhouette, gives the best performance in “Certain Women.” Do not expect action and thrills in this quiet, reflective study of very different women living their lives in Montana, whose vistas of the beautiful, rugged landscape are caught with an artist’s eye by Christopher Blauvelt (“Meek’s Cutoff (2010)”). Lily’s daily toil with the horses is mesmerizing to watch (it helps if you love horses) and meditative, making her story the best of the three. Overall,